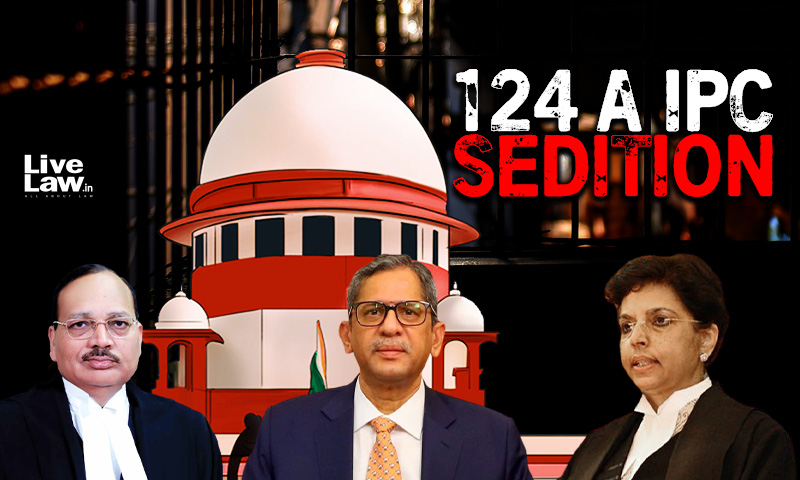 In a historic development, the Supreme Court on Wednesday ordered that the 152-year old sedition law under Section 124A of the Indian Penal Code should be effectively kept in abeyance till the Union Government reconsiders the provision.

In an interim order, the Court urged the Centre and the State governments to refrain from registering any FIRs under the said provision while it was under re-consideration.

A bench comprising the Chief Justice of India NV Ramana, Justice Surya Kant and Justice Hima Kohli held that all pending trials, appeals and proceedings with respect to charges framed under Section124 A be kept in abeyance. Adjudication with respect to other sections may proceed with no prejudice be caused to the accused, it held.

The bench said in its order :

"We hope and expect Centre and State Governments will refrain from registering any FIR, continuing investigation, or taking coercive steps under Section 124 A IPC when it is under reconsideration. It will be appropriate not to use this provision of law till further re-examination is over"

The Court also held that those already booked under Section 124A IPC and are in jail can approach the concerned courts for bail. It has also been ruled that if any fresh case is registered appropriate parties are at liberty to approach courts for appropriate relief and courts are requested to examine the relief sought taking into account the order passed by the court.

These directions will be in force until further orders.

The directions issued by the Court are as follows :

b. We hope and expect that the State and Central Governments will restrain from registering any FIR, continuing any investigation or taking any coercive measures by invoking Section 124A of IPC while the aforesaid provision of law is under consideration.

c. If any fresh case is registered under Section 124A of IPC, the affected parties are at liberty to approach the concerned Courts for appropriate relief. The Courts are requested to examine the reliefs sought, taking into account the present order passed as well as the clear stand taken by the Union of India.

d.All pending trials, appeals and proceedings with respect to the charge framed under Section 124A of IPC be kept in abeyance. Adjudication with respect to other Sections, if any, could proceed if the Courts are of the opinion that no prejudice would be caused to the accused.

e.In addition to the above, the Union of India shall be at liberty to issue the Directive as proposed and placed before us, to the State Governments/Union Territories to prevent any misuse of Section 124A of IPC.

f. The above directions may continue till further orders are passed

The bench passed the order after observing that the Union Government's stand that the colonial provision requires "re-consideration and re-examination" means that the Government has agreed with the prima facie view expressed by the Court that the "rigours of 124A IPC isn't in tune with current social milieu and was intended for when the country was under colonial regime". Therefore, the Court ordered that the Union of India may reconsider the provision.

"The court is cognisant of the duty of the State on one hand and citizens' civil liberties on the other . There is a requirement of balance of consideration. The case of petitioner is that this provision of law dated back 1898 and is being misused. The Attorney General had also given instances of glaring misuse like cases registered for recital of hanuman chalisa", the CJI said while dictating the order.

"Therefore, we expect that, till the re-examination of the provision is complete, it will be appropriate not to continue the usage of the aforesaid provision of law by the Governments", the Court's order stated.

Yesterday, the bench had agreed with the Centre's suggestion to defer the hearing of petitions till it reconsiders the provision if it could clarify how it planned to deal with the pending and future cases till the process was complete. The Court also suggested that the Centre issue directions to States to not register sedition cases till the review of Section 124A is complete and sought its response on the same.

The main contention raised by the petitioner was if an adjournment was indeed granted, how the interests of people who are already booked under Section 124A can be protected and if future cases can be kept abeyance till reconsideration is over. The Solicitor General has been asked to get instructions on this.

Today, when the matter was taken up, Solicitor General of India Tushar Mehta informed the Court that a proposed draft direction has been prepared to be issued by the Centre keeping in mind that a cognizable offence cannot be prevented from being registered. He added that once a cognizable offence was committed, it may not be proper to stay the effect of the provision either by the Centre or the Court. Therefore, the draft suggests selecting a responsible officer at the level of Superintendent of Police for scrutiny before registering FIR, and his satisfaction is subject to judicial review.

"What your lordships can consider is, if there is a stage of bail application involving Section 124A IPC, the bail applications may be decided expeditiously," he submitted.

The SG argued that it may not be the correct approach to pass any other order to stay the provisions upheld by a Constitutional bench in any other cases.

He also highlighted that no individual accused under the impugned Section was before the Court in this case. It was argued that to entertain this PIL may be a dangerous precedent for that reason.

However, Senior Advocate Kapil Sibal objected to this proposal and asserted that this was wholly unacceptable.

Justice Kant pointed out that according to the Centre, the pre-registration FIR scrutiny was to go to the Superintendent of Police and asked who the petitioners preferred for the same as a fair and impartial authority to scrutinise registration of FIR.

To this, Sibal replied that the FIR should not go to anybody and that it should be stayed at the first instance itself during the interregnum period.

Justice Kant pointed out that there was a subsequent development in the case and that the court was merely trying to explore a viable solution for the cases registered under the impugned Section during the interregnum.

After a private discussion, the Court asked the parties how many of the petitioners were in jail at present. Senior Advocate CU Singh responded that the petitioner in one of the cases was protected by this Court, referring to journalist Kishorechandra Wangkhem.

"I am pointing this out because Solicitor said that no accused are before the Court", he said. Meanwhile, Senior Counsel Sibal submitted that currently, 13,000 individuals were in jail under the impugned provision.

However, the SG submitted that the petition moved by Kishorechandra Wangkhem does not seek to quash the FIR, but rather to declare Section 124A unconstitutional.

The CJI then said that the bench had discussed elaborately and that in view of the above, it had found that the Union of India agrees with the prima facie opinion expressed by the Court that the rigours of Section 124A are not in accordance with the current social milieu.

On an earlier occasion, the court had decided to hear preliminary arguments on the issue of reference and had asked all the parties to file their written submissions on the issue, and the Central Government to file its affidavit on the issue of challenge to the validity of the law.

Pursuant to the court's order, the Solicitor General of India through his written submissions asserted before the Supreme Court that the judgement in Kedar Nath Singh is a good precedent and that it requires no consideration. He has also submitted that isolated instances of misuse cannot be a ground to uproot the precedent that has withstood the test of time for over six decades.

Meanwhile, the petitioners had filed an application seeking stay on operation of Sec 124A in event the Court decides to refer the matter to a larger Bench. As alternative relief, they sought direction that no fresh FIR be registered for the offence of Sedition under Section 124A, during the pendency of the case and that all pending investigations and proceedings remain stayed.

While issuing notice on the petitions in July 2021, the CJI had orally made critical remarks against the provision.

"Is it still necessary to retain this colonial law which the British used to suppress Gandhi, Tilak etc., even after 75 years of independence?", the CJI had asked the Attorney General for India.

"If we go see the history of charging of this section, the enormous power of this section can be compared to a carpenter being given a saw to make an item, using it to cut the entire forest instead of a tree. That's the effect of this provision", the CJI had said.

In April 2021, another bench led by Justice UU Lalit had issued notice on a petition filed by two journalists challenging Section 124A IPC.

(With inputs from Hannah M Varghese and Srishti Ojha)