If Hearing Was Virtual & Judge Didn't Know People Were Protesting Outside, How Is There An Influence? Calcutta HC Asks CBI In Narada Case 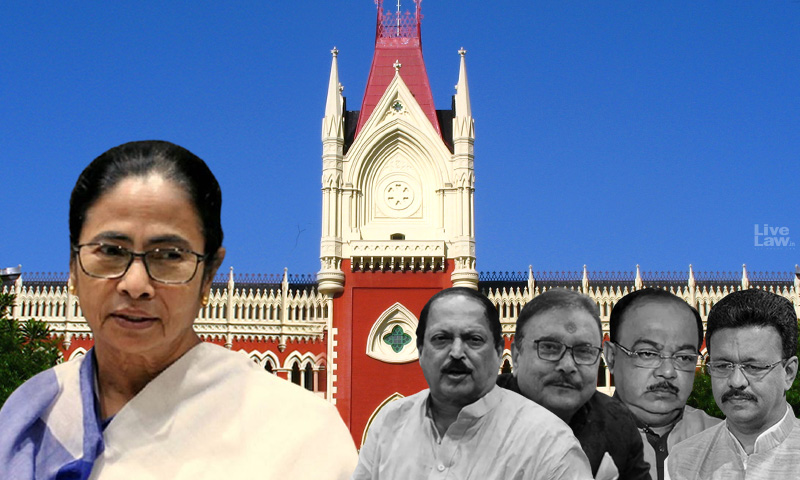 The 5-judge bench of the Calcutta High Court on Tuesday continued its hearing in the Narada case, in which the CBI has sought to transfer the trial and to declare that the hearing in the trial court on May 17 - which led to bail being granted to four TMC leaders - was vitiated on account of mob pressure.Solicitor General Tushar Mehta, appearing for the CBI, argued that a Court proceeding must...

The 5-judge bench of the Calcutta High Court on Tuesday continued its hearing in the Narada case, in which the CBI has sought to transfer the trial and to declare that the hearing in the trial court on May 17 - which led to bail being granted to four TMC leaders - was vitiated on account of mob pressure.

Solicitor General Tushar Mehta, appearing for the CBI, argued that a Court proceeding must not only be free of any Judicial bias but must also reflect the same to the minds of the common man.

He submitted that it is a settled principle of law that Justice must not only be done but it must also be seen to be done.

"Principle of 'Justice must seem to be done' is engrained in Jurisprudence of many countries, including ours. This is more so in criminal proceedings, which are in rem and affect fabric of the society in large," Mehta argued.

The submissions were made before a 5-Judges Bench comprising of Acting Chief Justice Rajesh Bindal, and Justices IP Mukherjee, Harish Tandon, Soumen Sen and Arijit Banerjee which is hearing the transfer application filed by CBI in Narada scam case.

The Solicitor General started the arguments today by giving a factual background of the case, relating to the dharna held by the Chief Minister of West Bengal before the CBI office and the protest led by Law Minister in front of the court complex to protest the arrest of four leaders.

He argued that there presence was intimidating enough to vitiate the entire atmosphere.

"The effect of terror engineered outside CBI office and Court had an effect not only on investigating agency but also on administration of justice," he submitted. He stated that the mobocracy has not been disputed and it is an admitted that members of legislative assembly were present at the scene.

He insisted that these events are reasonably likely to leave an impression on the minds of te common man that the Justice system was stifled with.

"The bias here is not due to the Judge's personal prejudice but due to fear created by acts of people gathered outside the court. The Judge may not have been influenced but the impression of common man has to be assessed," Mehta argued.

At this juncture, Justice IP Mukerjee told Mehta that both open Courts and peaceful assembly are features of our Constitution and one cannot be perceived to be hindering the other.

"In our country, there is a concept of open Courts. In our democracy, peaceful assembly and protests are allowed against executive action. So how does it create an impression in common man that such a protest will influence the judiciary?" the judge asked.

Justice Soumen Sen also asked Mehta that how could he say that the Judge was influenced when firstly, the hearing was on a virtual platform and secondly, the Special Judge had no knowledge that people have gathered outside.

"How is there an influence on the judge?" Justice Sen asked.

Justice Soumen Sen: Mr. Mehta, the hearing was on a virtual platform. The Judge did not know that people have gathered outside. How is there an influence on the judge?#NaradaCase #CalcuttaHighCourt

To this Mehta responded,

"It is not about what the Judge felt, he may not have known that people have gathered outside. But it is about what a reasonably informed common man would feel."

Can Judicial Order Be Set Aside On Public Perception?Calcutta High Court Asks CBI In Narada Case

In this regard, he cited several precedents. In R v. Sussex, he said, the principle was settled that Justice must also be "seen" to be done.

In Public Utilities Commission of the District of Columbia v. Pollak, a US Court discussed the sub-conscious bias of a Judge and held that where there is ground to believe that such sub-conscious may affect the outcome of the case, recusal would the apt resort.

The relevant para of the judgment is reproduced below:

"The judicial process demands that a judge move within the framework of relevant legal rules and the covenanted modes of thought for ascertaining them. He must think dispassionately and submerge private feeling on every aspect of a case. There is a good deal of shallow talk that the judicial robe does not change the man within it. It does. The fact is that on the whole judges do lay aside private views in discharging their judicial functions. This is achieved through training, professional habits, self-discipline and that fortunate alchemy by which men are loyal to the obligation with which they are entrusted.

But it is also true that reason cannot control the subconscious influence of feelings of which it is unaware. When there is ground for believing that such unconscious feelings may operate in the ultimate judgment, or may not unfairly lead others to believe they are operating, judges recuse themselves. They do not sit in judgment. They do this for a variety of reasons. The guiding consideration is that the administration of justice should reasonably appear to be disinterested as well as be so in fact."

In this backdrop, the Solicitor General urged the Court to not confine the term bias as meaning only personal or pecuniary bias.

"This term has to be seen in a wider sense where common man gets a perception that justice is done or not. The question is not whether his perception is right or wrong. Justice must be seen to have been done," he said.

The Bench also inquired as to why the CBI counsels did not seek for an adjournment from the Special Court. "They could have said that when things turn congenial, we will resume the hearing," one of the judges asked.

Mr.Mehta persistently urged the Bench to not restrict itself to "softer issues" like bail and adjudicate upon the larger issue of purported mobocracy during arrest of a political leader.

"Even if we say arrest was illegal, can constitutional functionaries who are supposed to set an example of good conduct before the public, take law in their own hands? Your decision will go a long way in setting ground for body politics," the SG said.

He stated that the present incident is not an isolated event but is a "template behaviour" in West Bengal whenever investigations are made against corruption in higher functionaries.

He urged the Bench to "shake its judicial conscience" and make an "authoritative pronouncement" as to what should be the response of executive against an investigation being conducted by a central agency, that too under Court's order.

The Bench however asked the SG, "why should the accused suffer" for the acts of the mob.

In response, Mehta stated that the gathering outside the BI office and the Special CBI Court was well orchestrated and the only beneficiaries were the accused persons.

"The crowd dispersed only after bail was granted," he pointed out.