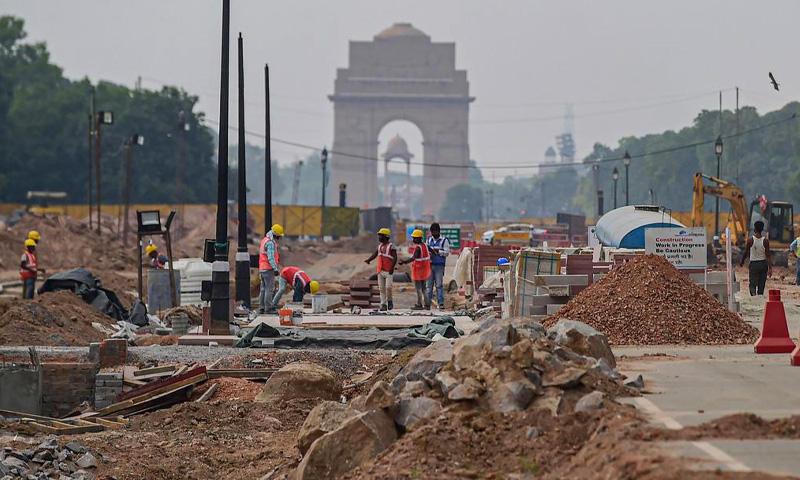 A division bench of Chief Justice DN Patel and Justice Jyoti Singh today dismissed with costs of Rs.1,00,000/- a public interest litigation seeking the temporary suspension of construction work on Central Vista Redevelopment Project, in light of CovidThe court said that the government had already stated that the workers were "staying on site" and all arrangements had been made to ensure...

The court said that the government had already stated that the workers were "staying on site" and all arrangements had been made to ensure Covid-19 appropriate behaviour on site.

The court also termed the petition a "motivated petition" and not a "genuine public interest litigation".

The bench said, "The Delhi Disaster Management Authority (DDMA) order in question nowhere prohibits construction work. The legality of the project has been upheld previously by the Supreme Court itself. They are supposed to complete the work by Nov, 2021. Time is of essence in the contract. The work has to be completed."

Earlier, pursuant to the Supreme Court's direction to approach the High Court for an early hearing of petition seeking temporary suspension of the Central Vista Project in light of Covid-19, the petitioners had approached the Delhi High Court which had directed the petitioners to file a fresh application in the matter.

Delhi High Court refuses to stay construction work on #CentralVista Redevelopment project stating that as the workers are staying on site, no question of suspending the construction work arises in light of #Covid19.

The bench had reserved verdict on May 17 after hearing Senior Advocate Siddharth Luthra for the Petitioners, Solicitor General Tushar Mehta for the Central Government and Senior Advocate Maninder Singh appearig or Shapoorji Pallonji Group, the project contractor.

Senior Advocate Siddharth Luthra appearing for the Petitioners pleaded that right to life and health is of paramount significance and hence, the project may be halted in view of rising number of Covid-19 cases.

He submitted that the authorities have not bothered to respond as to why the Central Vista project has been called an 'essential service' during the pandemic.

"What we are concerned with is life and health of people at site and construction workers, and of people of Delhi," he said.

He submitted that about 400 workers are being ferried from Sarai Kale Khan to the construction site in buses. "There were 180 buses as per reports which hasn't been refuted and 400 workers were being taken daily, excluding the guards, security etc.," he pointed out.

He stated that there is no document on record to indicate the Government's willingness to make on site accommodations and Covid compliant facilities at the site, as they have claimed.

He pointed out the photographs and stated that there are no beds, empty tents have been shown. Further, video report indicate that 7 persons are shoved into one room.

"There aren't going to be just these workers on site, there'll be other workers as well who will go back to their families. What about their families? What about all of us?" he appealed to the Bench.

Labelling Central Vista as the 'Central Fortress of Death', Luthra further pointed out that the project is now completely off access and it is difficult to determine if the steps, so assured by the Centre, have actually been taken. There is no publicly available material.

The Central Government has filed an affidavit before the High Court claiming that various Covid-19 compliant facilities have been provided for the workers at the site including provisions for their stay, testing, isolation and medical aid at the site.

It has also said that the instant petition is "an abuse of process of law" and must be dismissed with costs.

Solicitor General Tushar Mehta appearing for the Central Government assured the Court that the project is being undertaken in accordance with law and measures have been taken to check the health and wellbeing of individuals.

"There's no denying that Right to health is part of fundamental rights, and government has to ensure that Health, wellbeing and safety is protected…The question is, your Lordships are custodian of fundamental rights of everyone…Will stopping the project really help the workers?"

He alleged that the instant PIL is a façade, created to disguise the Central Vista Project that they always wanted to stop under one pretext or the other.

"It is just an attempt to some kind of vanity in minds of some individuals that no we will stop this. Petitioners are not concerned with workers or life of citizens.

The Solicitor General also took exception to the use of the word "Auschwitz" to compare the accommodation arrangements made for the workers as concentration camps.

"An expression Auschwitz was used during submissions which means concentration camps in Germany. How can he say that?", the SG said. The law officer of the Union said that the court cannot be used as a platform for such attacks.

Taking exception to Centre's remarks, Luthra said that it has been portrayed as if Petitioners are enemies, when they have only espoused the issue of health.

"They have resorted to 'Shoot the messenger and Ignore the message'…This shows level of concern. The message for which we have come is health and life and if they can't see it even now, it's an unfortunate reflection of how citizens health and life are considered.

As a citizen, I am entitled to have a view, and right to express it. Of course there are restrictions but, issue has been raised separately, issue of health and life. It is for them to see, Central or Delhi Government, they are responsible for my life. If they are failing at that and citizens come to them and say Wake up, lives are at stake, can that person be faulted?

Today there are few of us untouched by the pandemic. Yet they insist not a day, not a minute would be deferred. It is for this court to see if health and life of workers, security personnel, etc. is important," he said.

He added that the deadline of November 30th for launching the project may be postponed to some other date for the sake of health.

"Or is deadline of November 30th so sacrosanct that all of Article 19 and 21 should be thrown away. The city needs a few weeks to save lives, not much to ask," he said.

Senior Advocate Maninder Singh, appearing for Shapoorji Pallonji Group, that emerged as the lowest bidder for redevelopment project, objected to the proposal for extension of deadline of the project.

"These 2 petitioners cannot decide when project is likely to be completed. Tomorrow someone will say celebrate 15th August on 30th August.

Has this pandemic jolted us so much that we forget the importance of this national function?!" Singh remarked.

He further stated that the Rajpath areas has already been dug and if it is not completed before monsoon hits, water will fill up and there will be another pandemic of dengue, etc.

Luthra submitted that the Centre has falsely claimed that they have an RTPCR facility on the site. "Read on the top (of affidavit), it states it was home collection…If it is a home collection case, it isn't a case of on-site collection," he submitted.

Refuting this, Singh said that the facility is there and it is if a person does not go to the laboratory, and collection is done from premises, the report will have caption of home collection.

"The covid norms have been followed and will be followed, and if they aren't we can be taken to task by the court," he said.

Responding to this, Luthra said,

"In April you had empty tents, nothing existed on site. Today you claim to have RTPCR. I ask myself, had petitioners not come to the court and flagged, will any of this seen light of the day."