Delhi Represents The Nation, Centre Has A Special Responsibility Towards It: Supreme Court On Oxygen Shortage In National Capital 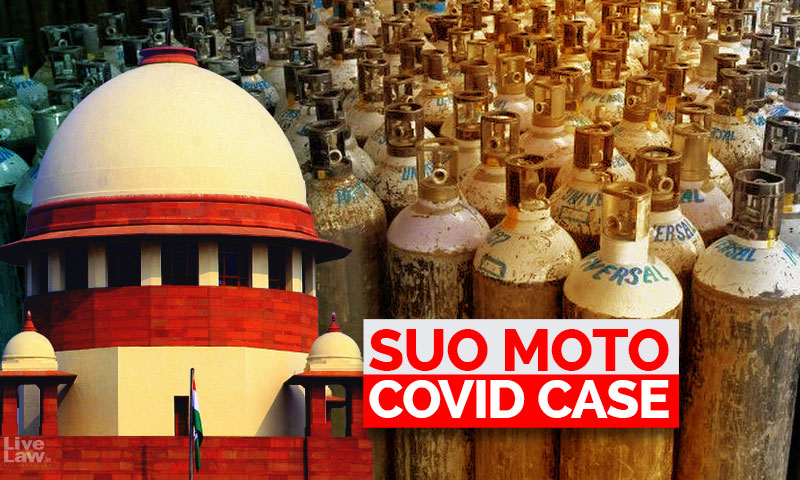 The Supreme Court on Friday observed that the Central Government has a special responsibility as far as the needs of citizens of Delhi are concerned. "Delhi represents the nation and there is hardly any one ethnically Delhite…You have a special responsibility as the Centre", Justice DY Chandrachud observed while hearing the suo moto case pertaining to COVID-19 related issues....

The Supreme Court on Friday observed that the Central Government has a special responsibility as far as the needs of citizens of Delhi are concerned.

"Delhi represents the nation and there is hardly any one ethnically Delhite…You have a special responsibility as the Centre", Justice DY Chandrachud observed while hearing the suo moto case pertaining to COVID-19 related issues.

The Bench also comprising of Justices L Nageswara Rao and S Ravindra Bhat added, "As a national authority which has a responsibility to the national capital you are answerable to the citizens."

The Supreme Court was hearing Solicitor General Tushar Mehta on the issue of Oxygen Shortage across the country. The hearing will be continued after lunch.

During the hearing, the SG claimed there is no oxygen shortage but availability in some areas, for instance Delhi, might be deficient because of inadequate lifting of oxygen supplies.

However, the Bench noted that as against 700 MT demand made by the Delhi Government, Centre had allocated on 490 MT of oxygen. It noted that as many as 500 lives were lost in merely five days and immediate steps must be taken to ameliorate the situation.

"Delhi represents the nation and there is hardly any one ethnically Delhite. Forget about someone not lifting oxygen. You have to push through since you have to save lives Mr Solicitor. You have a special responsibility as the Centre," Justice Chandrachud observed.

The Bench also asked the Delhi Government to not indulge in 'political bickering' and to work in cooperation with the Central Government during this humanitarian crisis.

"Politics is at the time of elections. There has to a sense of cooperation. A spirit of dialogue. Saving lives is the priority," observed Justice Chandrachud while asking GNCTD counsel Rahul Mehra to convey his message to the highest authority in the State.

Both Mehra and SG Mehta expressed that the observations of the bench will be followed in letter and spirit.

The SG told the Bench that the issue is mostly because Delhi is a non-industrial state and in the absence of any production, it does not have cryogenic tankers for transportation of liquid Oxygen.

"Centre is providing more tankers. Some philanthropic industries are being involved to get tankers and oxygen on war footing," the SG submitted.

"If there is a 200 MT deficit then you should give that straight away to Delhi. Centre has an important responsibility as far as citizens of Delhi is concerned. You have said surplus is there in steel sector, then use that and supply to Delhi."

Justice Ravindra Bhat added, "Delhi is a non-industrial state like Goa, Uttarakhand and everybody cannot be on same board."

The Bench addressed a plethora of issues being faced by people due to shortage of medical facilities amid the second wave of the pandemic. It also put questions to the Centre on its vaccination policy, and differential pricing of vaccines.

During the hearing, Justice Chandrachud also asked the Centre if a mechanism can be developed to show real time updates regarding allocation of Oxygen.

"Our hearing must make a difference. Tell us how much oxygen will be made available to critical states," the Bench asked the Solicitor General who in turn informed the Court that a virtual control room is working 24 x 7 to monitor oxygen needs of states.

The Supreme Court asked the Central Government as to why it is not following a 'national immunization program' for Covid-19 vaccination. Justice Chandrachud flagged concerns about exclusion of SC/STs, disenfranchised people from vaccination coverage.

"How Centre will ensure registration for vaccines for illiterate people considering the fact that COWIN app registration is mandatory," he further asked the Solicitor General

During the hearing, the Court also questioned the Government on differential pricing of vaccines.

"Manufacturers are charging Rs. 150 from the Centre but Rs. 300 or 400 from states…The price difference becomes 30 to 40,000 crores. There is no point for price difference," Justice Bhat told the SG.

The Court asked the Central Government to not leave vaccine pricing to the manufacturers and to invoke its powers under Section 92 and 100 of the Patents Act for compulsory licensing of the COVID vaccines.

"Rule 19 and 20 of Drugs Price Control order mandates you to control the price of drugs, whether you procure or not let states get it from you," Justice Ravindra Bhat told the Solicitor General.

Justice Chandrachud further told the SG, "Dont leave it to the manufacturers. How will they determine equity? Invoke your powers to see that additional facilities are created for vaccine manufacturing,"

Justice Bhat added that India was at the forefront in TRIPS negotiations on compulsory licensing and stated this is the most important case for the same.

Section 92 of the Patent Act provides that if the Central Government is satisfied in respect of any patent in force in circumstances of national emergency or in circumstances of extreme urgency or in case of public non-commercial use, that it is necessary that compulsory licenses should be granted to work the invention, it may make a declaration to that effect.

The Supreme Court asked how will Centre ensure equity by private vaccine manufacturers when it is buying only 50% of the doses.

"Will one state get priority access over another in getting the vaccines?" the Court rhetorically asked while suggesting that Centre should buy 100% COVID vaccine doses for equitable distribution.

It observed, "Vaccine manufacturing is publicly funded and hence, vaccines become public goods. So, why not Centre buy full doses of vaccines."

The Supreme Court observed that Bangladesh has developed a generic drug for Remdesivir and is exporting the same to other countries and that Jharkhand has proposed to import from Bangladesh.

It asked why should the Court not issue directions under Section 100 and Section 92 of Patents Act to enable generics to manufacture Covid-drugs without the fear of legal action, in order to overcome the shortage.

"Is the logistical concern more important than right to health", Supreme Court asked.

The Supreme Court also asked the Central Government if testing labs have been directed to track the mutant variant of coronavirus.

"The new variant is not getting detected in RT-PCR tests. Medical centres are driving away patients without positive report or charge high sums. How is this being regulated?" the Apex Court asked.

During the hearing, the Supreme Court acknowledged that medical professionals are overburdened and are now reaching a breaking point.

"We cannot just say they are Covid warriors. Look at how nurses are dying. They play a vital role. It is time we speak about them and express gratitude" Justice Ravindra Bhat observed. He urged the Solicitor General to use his powers to ensure that medical professionals who are doing more are paid more.

A bench comprising Justices DY Chandrachud, L Nageswara Rao and S Ravindra Bhat was hearing the suo moto case taken by the Supreme Court to deal with COVID19 related issues(In Re Distribution of Essential Supplies and Services during Pandemic).

On the last hearing date, April 27, the bench had sought the response of the Central Government on issues such as - oxygen supply, availability of drugs like Remdesivir, vaccination pricing policy etc.

The Court had also asked the Centre to explain the rationale and basis for the vaccination pricing.

"The government shall explain the rationale for differential pricing in regard to vaccines sourced by the Union government on one hand and the states on the other hand", the Court had directed the Centre.

The bench had also clarified that the suo moto case was not intended to stop the High Courts from dealing with #COVID19 related issues in their jurisdictions. Acknowledging that the High Courts were better equipped to deal with local issues, the Supreme Court said that it was focusing on larger, inter-state issues, and was playing only a complementary role to the High Courts.