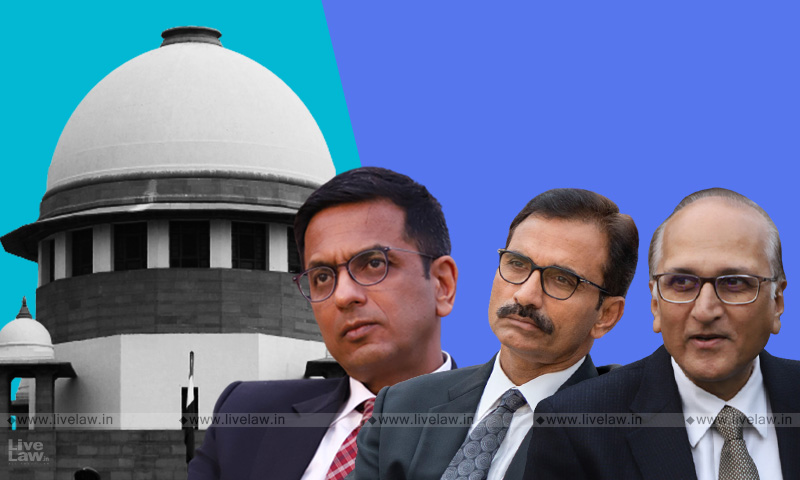 There should not be any coercive action against any citizen for putting out an SOS call on social media seeking medical help for COVID, said the Supreme Court on Friday.

The Court strictly said that contempt action will be taken against police officers who clampdown on citizens who ventilate their grievances with respect to COVID in public platforms.

"If citizens communicate their grievance on social media and internet, then it cannot be said that it's wrong information," observed Justice DY Chandrachud today while hearing the suo moto case pertaining to COVID-19 related issues.

The Court warned that it will initiate contempt proceedings against such officers found to be clamping down any such information.

Referring to threats of coercive action against people putting SOS calls on social media, the Bench also comprising of Justices L Nageswara Rao and S Ravindra Bhat said, "We want to make it very clear that if citizens communicate their grievance on social media and internet then it cannot be said its wrong information."

The Court added that clamping down of any information by the authorities will be treated as a Contempt of Court. "Let a strong message go to all the states and DGP of states," it observed.

In the copy of the order released on May 2, the Court stated :

"The Central Government and State Governments shall notify all Chief Secretaries/Directors General of Police/Commissioners of Police that any clampdown on information on social media or harassment caused to individuals seeking/delivering help on any platform will attract a coercive exercise of jurisdiction by this Court. The Registrar (Judicial) is also directed to place a copy of this order before all District Magistrates in the country"

Recently, the Punjab and Haryana High Court also remarked that the social media is doing a good job in reaching out to people in urgent medical needs.

Amid acute shortage of oxygen and drugs that are essential in treatment of Covid-19 during the second wave, many affected people have been resorting to social media to seek assistance in procurement of resources.

Many celebrities and social media influencers have also lent a voluntary hand in compiling real-time information on availability of resources and sharing toolkits.

The SC's remarks assume relevance in view of UP Government's decision to prosecute people under National Security Act for allegedly raising false alarms on social media.

UP Chief Minister Yogi Adityanath had asserted at a virtual press meet that there is no shortage of oxygen in any private or public COVID-19 hospital in the State and that action under National Security Act may be taken against people spreading "rumours" on social media.

Adityanath also issued instructions to high-rank Police officials to "keep a watch" on people spreading rumours, and duly investigate all such incidents to see if the scarcity was reported just to create fear.

Recently, the Amethi Police in UP recently booked a boy under various provisions of IPC for "spreading false information". The accused had issued an appeal on Twitter for leads for oxygen availability to save the life of his grandfather who was critical.

Meanwhile, a PIL has also been filed before the Allahabad High Court by activist Saket Gokhale, seeking to restrain any coercive action.

A bench comprising Justices DY Chandrachud, L Nageswara Rao and S Ravindra Bhat was hearing the suo moto case taken by the Supreme Court to deal with COVID19 related issues(In Re Distribution of Essential Supplies and Services during Pandemic).

On the last hearing date, April 27, the bench had sought the response of the Central Government on issues such as - oxygen supply, availability of drugs like Remdesivir, vaccination pricing policy etc.

The Court had also asked the Centre to explain the rationale and basis for the vaccination pricing.

"The government shall explain the rationale for differential pricing in regard to vaccines sourced by the Union government on one hand and the states on the other hand", the Court had directed the Centre.

The bench had also clarified that the suo moto case was not intended to stop the High Courts from dealing with #COVID19 related issues in their jurisdictions. Acknowledging that the High Courts were better equipped to deal with local issues, the Supreme Court said that it was focusing on larger, inter-state issues, and was playing only a complementary role to the High Courts.