Discrimination Against SC-STs Still Prevalent; Cannot Presume They May Misuse Provisions Of Law As A Class: SC [Read Judgment] 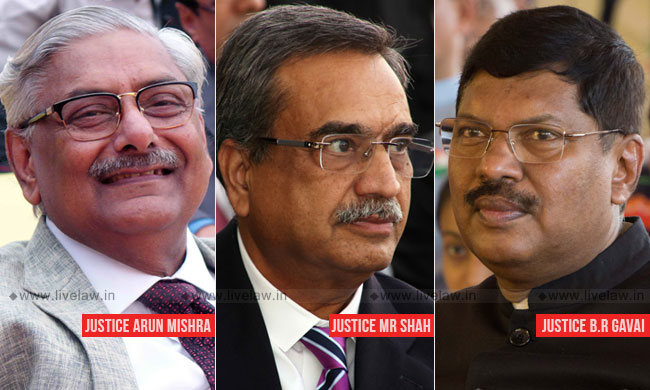 x
"It would be against the basic human dignity to treat all of them as a liar or as a crook person and cannot look at every complaint by such complainant with a doubt."

While withdrawing the conditions imposed by the March 20, 2018 judgment for arrest of a person under the SC/ST Act, the Supreme Court observed that the discrimination against the members of the Scheduled Castes and Scheduled Tribes is still prevalent in various parts of the country The bench comprising Justice Arun Mishra, Justice MR Shah and Justice BR Gavai observed that there...

While withdrawing the conditions imposed by the March 20, 2018 judgment for arrest of a person under the SC/ST Act,  the Supreme Court observed that the discrimination against the members of the Scheduled Castes and Scheduled Tribes is still prevalent in various parts of the country

The bench comprising Justice Arun Mishra, Justice MR Shah and Justice BR Gavai observed that there can be no presumption that the members of the Scheduled Castes and Scheduled Tribes may misuse the provisions of law as a class. It would be against the basic human dignity to treat all of them as a liar or as a crook person and cannot look at every complaint by such complainant with a doubt, the bench observed.

It observed that the directives iii, iv & v issued in Dr. Subhash Kashinath Mahajan v. State of Maharashtra are against the concept of protective discrimination in favour of down-trodden classes under Article 15(4) of the Constitution and also impermissible within the parameters laid down by this Court for exercise of powers under Article 142 of Constitution of India.

In Dr. Subhash Kashinath Mahajan, it was directed that the arrest of a public servant can only be after approval of the appointing authority and of a non-public servant after approval by the S.S.P. which may be granted in appropriate cases if considered necessary for reasons recorded. It was further held that such reasons must be scrutinized by the Magistrate for permitting further detention. Another direction was to conduct a preliminary enquiry may be conducted by the DSP concerned to find out whether the allegations make out a case under the Atrocities Act and that the allegations are not frivolous or motivated.

The bench observed that, these directives may delay the investigation of cases. The direction which makes it mandatory to require approval of appointing authority/ S.S.P, the bench said would run against the spirit of Section 197, Cr.PC. and that would be discriminatory and against the protective discrimination envisaged under the Act.

The other direction regarding preliminary enquiry, the bench observed, puts the members of the Scheduled Castes and Scheduled Tribes in a disadvantageous position in the matter of procedure vis-a-vis to the complaints lodged by members of upper caste, for later no such preliminary investigation is necessary. It further said:

"In case a cognisable offence is made out, the FIR has to be outrightly registered, and no preliminary inquiry has to be made as held in Lalita Kumari (supra) by a Constitution Bench. There is no such provision in the Code of Criminal Procedure for preliminary inquiry or under the SC/ST Act, as such direction is impermissible."

The bench made these observations with regard to discrimination faced by SC-STs:

In spite of reservation, the fruits of development have not reached to them

As to prevailing conditions in various areas of the country, we are compelled to observe that SCs/STs are still making the struggle for equality and for exercising civil rights in various areas of the country. The members of the Scheduled Castes and Scheduled Tribes are still discriminated against in various parts of the country. In spite of reservation, the fruits of development have not reached to them, by and large, they remain unequal and vulnerable section of the society. The classes of Scheduled Castes and Scheduled Tribes have been suffering ignominy and abuse, and they have been outcast socially for the centuries. The efforts for their upliftment should have been percolated down to eradicate their sufferings.

Though, Article 17 of the Constitution prohibits untouchability, whether untouchability has vanished? We have to find the answer to 34 all these pertinent questions in the present prevailing social scenario in different parts of the country. The clear answer is that untouchability though intended to be abolished, has not vanished in the last 70 years. We are still experimenting with 'tryst with destiny.' The plight of untouchables is that they are still denied various civil rights; the condition is worse in the villages, remote areas where fruits of development have not percolated down. They cannot enjoy equal civil rights. So far, we have not been able to provide the modern methods of scavenging to Harijans due to lack of resources and proper planning and apathy. Whether he can shake hand with a person of higher class on equal footing? Whether we have been able to reach that level of psyche and human dignity and able to remove discrimination based upon caste? Whether false guise of cleanliness can rescue the situation, how such condition prevails and have not vanished, are we not responsible? The answer can only be found by soul searching. However, one thing is sure that we have not been able to eradicate untouchability in a real sense as envisaged and we have not been able to provide down-trodden class the fundamental civil rights and amenities, frugal comforts of life which make life worth living. More so, for Tribals who are at some places still kept in isolation as we have not been able to provide them even basic amenities, education and frugal comforts of life in spite of spending a considerable amount for the protection, how long this would continue. 35 Whether they have to remain in the status quo and to entertain civilized society? Whether under the guise of protection of the culture, they are deprived of fruits of development, and they face a violation of traditional rights?

They do labour, bonded or forced, in agricultural fields, which is not abrogated in spite of efforts. In certain areas, women are not treated with dignity and honour and are sexually abused in various forms. We see sewer workers dying in due to poisonous gases in chambers. They are like death traps. We have not been able to provide the masks and oxygen cylinders for entering in sewer chambers, we cannot leave them to die like this and avoid tortious liability concerned with officials/machinery, and they are still discriminated within the society in the matter of enjoying their civil rights and cannot live with human dignity

Cannot Presume They Will Misuse Provisions Of Law As A Class

There is no presumption that the members of the Scheduled Castes and Scheduled Tribes may misuse the provisions of law as a class and it is not resorted to by the members of the upper Castes or the members of the elite class. For lodging a false report, it cannot be said that the caste of a person is the cause. It is due to the human failing and not due to the caste factor. Caste is not attributable to such an act. On the other hand, members of the Scheduled Castes and Scheduled Tribes due to backwardness hardly muster the courage to lodge even a first information report, much less, a false one. In case it is found to be false/unsubstantiated, it may be due to the faulty investigation or for other various reasons including human failings irrespective of caste factor. There may be certain cases which may be false that can be a ground for interference by the Court, but the law cannot be changed due to such misuse. In such a situation, it can be taken care in proceeding under section 482 of the Cr.PC

As a matter of fact, members of the Scheduled Castes and Scheduled Tribes have suffered for long, hence, if we cannot provide them protective discrimination beneficial to them, we cannot place them at all at a disadvantageous position that may be causing injury to them by widening inequality and against the very spirit of our Constitution. It would be against the basic human dignity to treat all of them as a liar or as a crook person and cannot look at every complaint by such complainant with a doubt. Eyewitnesses do not come up to speak in their favour. They hardly muster the courage to speak against upper caste, that is why provisions have been made by way of amendment for the protection of witnesses and rehabilitation of victims. All humans are equal including in their frailings. To treat SCs. and STs. as persons who are prone to lodge false reports under the provisions of the Scheduled Castes and Scheduled Tribes Act for taking revenge or otherwise as monetary benefits made available to them in the case of their being subjected to such offence, would be against fundamental human equality. It cannot be presumed that a person of such class would inflict injury upon himself and would lodge a false report only to secure monetary benefits or to take revenge. If presumed so, it would mean adding insult to injury, merely by the fact that person may misuse provisions cannot be a ground to treat class with doubt. It is due to human failings, not due to the caste factor. The monetary benefits are provided in the cases of an acid attack, sexual harassment of SC/ST women, rape, murder, etc. In such cases, FIR is required to be registered promptly.