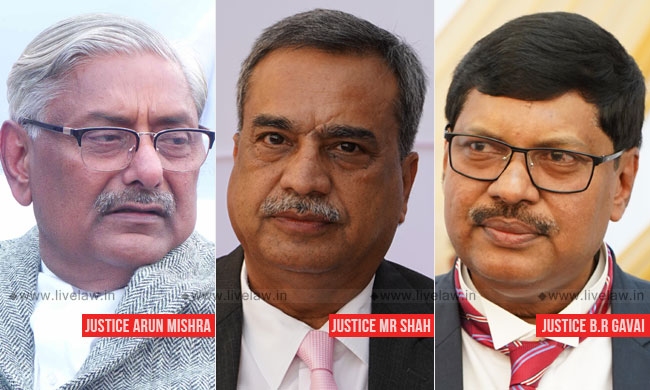 A three judge bench of the Supreme Court consisting of Justices Arun Mishra, M R Shah and B R Gavai on Tuesday allowed Centre's petition seeking review of its March 20, 2018 judgement which had virtually diluted provisions of arrest under the SC/ST Act.The Court observed that powers under Article 142 of the Constitution could not have been exercised to pass directions against...

A three judge bench of the Supreme Court consisting of Justices Arun Mishra, M R Shah and B R Gavai on Tuesday allowed Centre's petition seeking review of its March 20, 2018 judgement which had virtually diluted provisions of arrest under the SC/ST Act.

The Court observed that powers under Article 142 of the Constitution could not have been exercised to pass directions against the statute.

The two-judges bench should not have framed guidelines as it is within legislature's domain to do so, the Court said. It observed that the protective nature of the Act was necessary in view of the abuses to which people from marginalized communities are being subjected to.

"We do not doubt that directions encroach upon the field reserved for the legislature and against the concept of protective discrimination in favour of down­trodden classes under Article 15(4) of the Constitution and also impermissible within the parameters laid down by this Court for exercise of powers under Article 142 of Constitution of India", said the Court in the judgment.

The May 20 judgment had held that arrest of a public servant under SC/ST Act should be after approval of the appointing authority and of a non-public servant after approval of the SSP and that a preliminary enquiry must be held by the DSP to see whether the allegations make out a case under SC/ST Act. The two judge bench said that these guidelines were issued "in view of the acknowledged abuse of law of arrest in cases under the Atrocities Act".

"There is no presumption that the members of the Scheduled Castes and Scheduled Tribes may misuse the provisions of law as a class and it is not resorted to by the members of the upper Castes or the members of the elite class. For lodging a false report, it cannot be said that the caste of a person is the cause. It is due to the human failing and not due to the caste factor. Caste is not attributable to such an act. On the other hand, members of the Scheduled Castes and Scheduled Tribes due to backwardness hardly muster the courage to lodge even a first information report, much less, a false one. In case it is found to be false/unsubstantiated, it may be due to the faulty investigation or for other various reasons including human failings.There may be certain cases which may be false that can be a ground for interference by the Court, but the law cannot be changed due to such misuse", the judgment said.

It was on September 18 that the bench reserved orders on the review.

On September 13, a two judge bench consisting of Justices Arun Mishra and U U Lalit had referred the review to a three judge bench.

Attorney General K K Venugopal had said the whole March verdict was "problematic" and it should be reviewed by the court.

Senior advocate Vikas Singh, appearing for the parties supporting the last year verdict, had said that the Centre's review has become infructuous as Parliament has already passed the Scheduled Castes and the Scheduled Tribes (Prevention of Atrocities) Amendment Act, 2018 to neutralize the effects of the judgement.

Senior advocate Gopal Shankarnaryanan, appearing for one of the party supporting the last year's verdict, said that the protection from immediate arrest given in the judgement was not against the spirit of Constitution.

The judgment under review was delivered by a bench of Justices A K Goel and U U Lalit. Observing that that the Act was being misused, the bench said that the bar against grant of anticipatory bail was not absolute. If no prima facie case is made out or where on judicial scrutiny the complaint is found to be prima facie mala fide, anticipatory bail can be granted, the Court said. Also, arrest of a public servant for offences under the Act can only be after approval of the appointing authority and of a non-public servant after approval by the Senior Superintendent of Police (SSP). To avoid false implication of an innocent, a preliminary enquiry may be conducted by the DSP concerned to find out whether the allegations make out a case under the Atrocities Act and that the allegations are not frivolous or motivated.

The judgment led to huge protests by Dalit groups, who called for a Bharat Bandh against the dilution of provisions meant to prevent atrocities in the name of caste.

Following the protests, the Central Government mooted a bill to amend the SC/ST Act to neutralize the effects of the judgment. The Bill was passed by the Parliament in the monsoon session of 2018, restoring the bar against anticipatory bail and nullifying the apex court verdict.

By way of the Amendment, a new section 18A was inserted in the Act of 1989, which does away with the court-imposed requirements of undertaking preliminary inquiry and of procuring approval prior to making an arrest. It also restores the unconditional ban on the grant of anticipatory bail in the event of arrest for an offence under the Act.

The Amendment expressly overrides any "judgment or order or direction of any court" in as much as it contains a non-obstante clause to that effect.

In contrast to the directions issued by Supreme Court, the Amendment Bill asserts that in cases under the Atrocities Act, no procedure other than that specified under the Act and the Cr. P. C. shall apply.

Though the Amendment Act was challenged before the Supreme Court, the Court refused to stay its operation.