Encounter Not A Procedure Established By Law; Condoning It A Disservice To Nation & Constitution : Justice Deepak Gupta 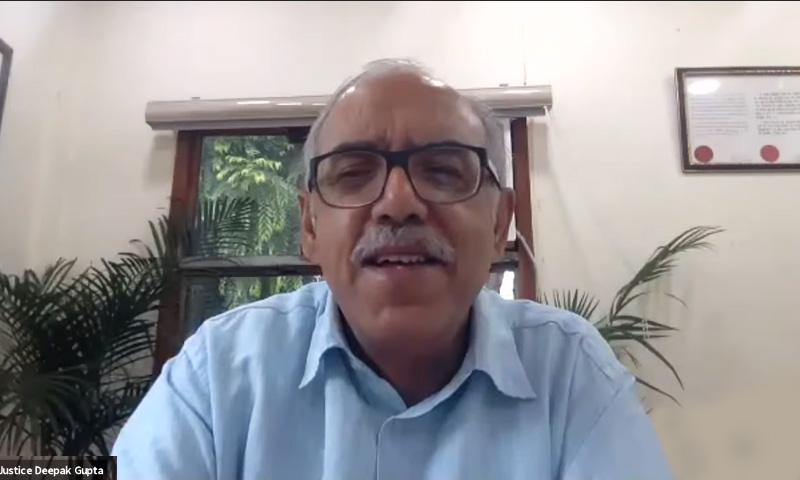 "The brazeness with which the law is being flouted does not protend good things for the country coming up," former Supreme Court Judge, Justice Deepak Gupta remarked recently during an interview with The Wire. The remarks were made while referring to the "blatant" violation of procedure in the Vikas Dubey encounter case. Justice Gupta pointed out that after Dubey was arrested...

"The brazeness with which the law is being flouted does not protend good things for the country coming up," former Supreme Court Judge, Justice Deepak Gupta remarked recently during an interview with The Wire.

The remarks were made while referring to the "blatant" violation of procedure in the Vikas Dubey encounter case.

Justice Gupta pointed out that after Dubey was arrested by the Madhya Pradesh Police in Ujjain, he was not produced before a Magistrate. He clarified that even though Section 167 of the CrPC stipulates that an accused must be produced before a magistrate within 24 hrs of arrest, the words used in the provision are "forthwith".

"24 hours is the upper limit of the time," he said while hinting that Dubey should have been produced before a Magistrate in MP itself.

While saying that there cannot be a "final word" from him on the legality of the encounter as investigation on it is underway, he said "But there are indications that this was not an encounter, he did not run away. He was killed. That brings us to the question why he was killed".

He made this statement after narrating some of the suspicious circumstances such as media being stopped from following the police convoy.

"An encounter is not a procedure established by law. Killing by police - it is a killing, I'm qualifying my word, that will have to come out later - but it's not a procedure established by law. So it becomes illegal by itself. When we condone such an action, when we turn a blind eye to it, we are doing a disservice to the nation, and a disservice to the Constitution".

"If we are call ourselves a civilized nation, if we are to say that we are a country governed by rule of law, then there is no place for encounters", he said.

He therefore recommended that an independent investigation must be carried on in the matter, as stipulated by the Supreme Court in the case of PUCL v. State of Maharashtra.

In this case, the Top Court had laid down 16 guidelines to be followed during investigating encounter killings by the police. These guidelines include:

Justice Gupta was also critical of the UP Police for demolishing Dubey's house in Kanpur, subsequent to martyrdom of eight policemen.

"There's no procedure prescribed for destroying the house…you are destroying evidence," he remarked.

Justice Gupta expressed concerns over legitimacy given to police encounters and the unwarranted positive reaction that such incidents often reap.

"The law has not been followed- that is worrisome. But what worries me even more is that a lot of people holding positions in power have not only not condemned the incident but have sort of supported the incident," he said.

Stating that no one has the authority to take the law into their hands he remarked,

"You have an investigation, prosecution and adjudication by the judges. But you can't have the investigator, prosecutor, adjudicator, jury, judge, everybody in one person. If you let be, that's very sad. It's not only the Vikas Dubey's case. It also happened in Hyderabad… Legal system cannot be hijacked by the police or anybody else."

"Glorification on large screen especially of police officials who take the law into their own hands is sad. They become larger than life images," he added.

Justice Gupta asserted that it is the Judiciary, which has a key role to play in order to change the mindset of the people.

"I strongly believe that when a judge refuses to grant bail to any person who's committed any grave crime, then the Court is depriving them of liberty in accordance with law. But then don't we have the responsibility to see that his rights are not trammeled while he's in custody."

He recognized that one of the reasons why police encounters gained popular support was delay in delivering of justice.

"There is no doubt that the long delays in the court, in the judicial system, in delivering Justice in cases like this does cause anguish in the minds of people…judiciary must try and decide these types of cases as fast as possible," Justice Gupta recommended.

He however sought Government's support to ensure that the Justice Delivery system runs smoothly.

"We need to improve the judicial system but that can be done only with the help of people in power. If the judiciary is only going to get 0.57% out of the budgetary allocation of the country, then we have hardly about 20,000 judges in the country for a population of more than 135 crore. That's abysmally low," he said.

Justice Gupta stressed that the clarion call of police reforms must be addressed promptly, and said that the Police personnel should be trained that brutality is not the remedy to lawlessness.

"Our problem is that we have not followed various judgments of the Supreme Court, various recommendations of various commissions, for separate investigation wing, separate law and order wing…police reforms are not being done. Police is not being trained…policemen in India don't regard brutality as something which is abhorrent to rights. They feel it's a part of the game."

However, he clarified that Police is not all bad. "We've seen a very gentle face of the police during these Covid times, where they helped people," he said while stressing that lack of proper training has plagued the system.

Inter alia, he expressed concern over inclination of the legal system in favour of the rich and powerful.

"Our legal system is really geared up in favour of the rich…When the rich and powerful are behind bars they keep filing bail applications only to get an order that their trail may be expedited…their trial is being expedited at the cost of some poor man getting legal aid, whose legal aid is not doing the same sort of job of filing bail applications timely," he explained.

He also made crucial remarks upon registration of FIRs and arrests of student protesters and journalists, in relation to the anti-CAA protests.

"I agree that a lot of these cases should be just thrown out…in fact in my view, this law of sedition should be thrown out…I think most of the trial court judges have not even read the judgment in previous cases on what amounts to sedition. If they read that, even FIR will not made a case for sedition. Why are they issuing notices…" he said.

This is not the first time that Justice Gupta has voiced against the law of sedition. In a speech delivered as part of Justice PD Desai Memorial Lecture at Ahmadabad in September 2019, he said

"The last few years have given rise to a number of cases where the law of sedition or creating disharmony have been misused rampantly by the police to arrest and humiliate people who have not committed the crime of sedition as laid down by the Constitution Bench of Supreme Court. The manner in which the provisions of Section 124A are being misused, begs the question as to whether we should have a relook at it. Freedom of expression being a constitutional right must get primacy over laws of sedition"

During the interview Justice Gupta reiterated, "as long as a protest is peaceful, as long as it is setting up your constitutional rights, you have a right to protest against the government in power."