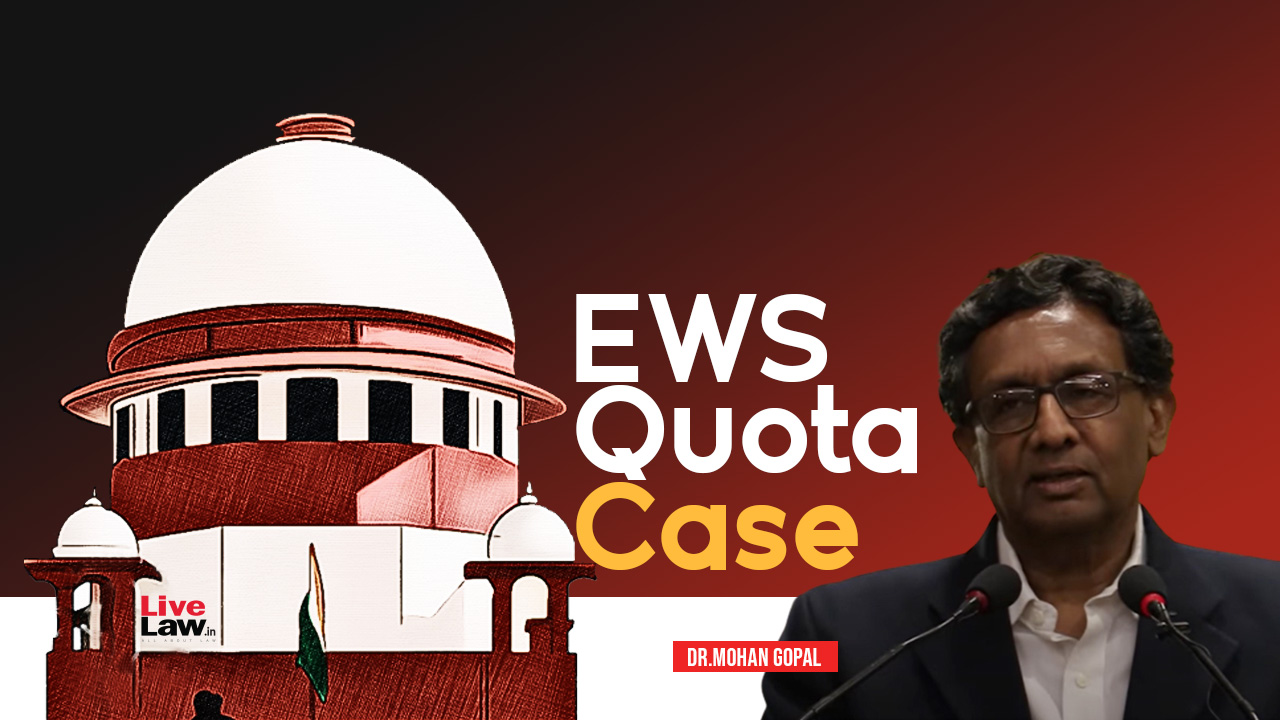 Acclaimed academician Professor Dr.Mohan Gopal made arguments before the Supreme Court on Tuesday challenging the constitutional validity of the Constitution(103rd) Amendment which introduced reservation for Economically Weaker Sections (EWS) in education and public employment.

Addressing a Constitution Bench comprising Chief Justice of India UU Lalit, Justices Dinesh Maheshwari, S Ravindra Bhat, Bela M Trivedi and JB Pardiwala, Dr.Gopal argued that the EWS quota inverted the concept of reservation as a tool of representation for the disadvantaged groups and converts it into a scheme for financial upliftment. As the EWS quota excludes socially and educationally backward classes and confines the benefits only to the "forward classes", it results in violation of the principles of equality and social justice and amounts to infringing the basic structure of the Constitution.

Dr.Gopal explained that the reservations which existed before the introduction of EWS quota were not based on a caste-identity, but was based on social and educational backwardness and lack of representation. However, the 103rd Amendment in effect states that backward classes are not entitled to EWS quota and the same is available only to the poor among the forward classes.

"103rd amendment is first amendment which is caste- based reservation. Social and educational backward are two wings on which reservations are relied and if removed, it'll crash", he submitted.

It is a fallacy to assume that SEBC reservation is caste-based and excludes the upper castes. "In Kumari v. State of Kerala, it was said all classes are entitled for inclusion as socially and educationally backward classes. This isn't well understood in country", he added.

He pointed out that in several states, several Brahmin communities who are victims of social discrimination have been given benefits under OBC reservation. Elaborating his point further, he stated that reservation under Articles 15(4) and 15(5) is for all castes who are socially and educationally backward. However, Article 15(6), which has been added by the 103rd amendment, specifically states it its for those who are not covered under SC/ST and SEBC reservation. This exclusionary aspect was highlighted as a negation of equality code.

"If this was really economic reservation, it would be given to poor people irrespective caste. But that was not done", he stressed.

Reservation can only for the purpose of representation

Dr.Gopal referred to the Constituent Assembly Debates to point out that reservation was introduced to ensure representation for the disadvantaged groups.

Equality was always a demand of backward classes and not the elite classes because it's them that needed equality. They asked for representation, not economic upliftment.

He pointed out that financial condition is a transient situation, which can change by variable events like winning a lottery or losing a gamble. However, there are certain structural conditions which keep certain communities poor. It is to address the latter that reservation has been introduced, so that they get representation in education and public employment, which will in turn help their advancement.

"Our aim should be not to give reservation unless it's for representation", he added.

"EWS is given to individuals and families. This is very important. Ultimately constitution is a document that protects minorities- in a larger sense of the word, those who are weak. And 103 amendment skews us away from that and looks at families and individuals", he said.

He then listed out certain specific points which violate basic structure :

"The exclusion of backward classes is illegal. You tell the poorer person that you're not entitled because you're from a lower caste. This is happening on ground.This denial of equal rights and opportunities to backward classes will change the identity of the constitution in the minds of people and it will be seen as an instrument which protects privilege", he asserted.

Dr.Gopal termed the amendment "a deceitful and a backdoor attempt to destroy the concept of reservation by granting this to the forward class".

Reservation in India is anti monopoly and anti oligarchy, however EWS quota helps to fuse the oligarchy with the democracy.

The amendment has been passed on the basis of two blatant misrepresentations- that the SEBC reservation does not cover forward castes and that EWS quota helps to further the Directive Principle under Article 46(Promotion of educational and economic interests of Scheduled Castes, Scheduled Tribes and other weaker sections).

He wondered how the EWS quota can further the principle of Article 46 when it excludes SCs/STs. "103rd amendment provides reservation to those who traditionally are the source of injustice for backward classes", he added. This amendment is being seen as an instrument to protect the privileged and rather than safeguarding the marginalised.

Fraud on the Constitution

The petitions challenge the validity of Constitution (103rd) Amendment Act 2019. Economic reservation in jobs and education was proposed to be provided by inserting clause (6) in Articles 15 and 16 of the Constitution through the amendment passed by the Parliament in January 2019. The newly inserted Article 15(6) enabled the State to make special provisions for advancement of any economically weaker section of citizens, including reservations in educational institutions. It states that such reservation can be made in any educational institution, including private institutions, whether aided or unaided, except minority educational institutions covered under Article 30(1). It further states that the upper limit of the reservation will be ten percent, which will be in addition to the existing reservations. After the amendment was notified by the President, a batch of petitions were filed in the Supreme Court challenging the constitutional validity of economic reservation.