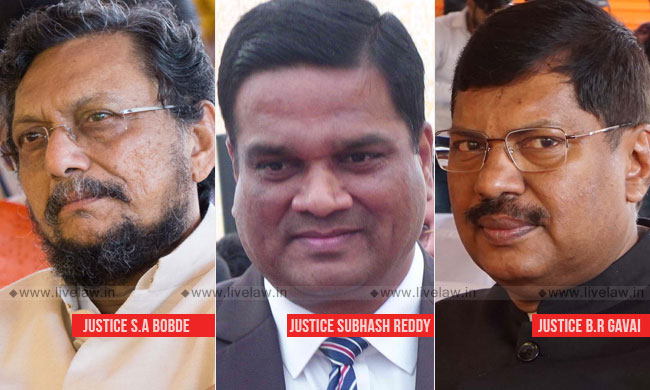 The Supreme Court on Wednesday decided to refer to Constitution Bench the petitions challenging the validity of Constitution 103rd Amendment which introduced provision for reservation to Economically Weaker Sections (EWS).Economic reservation in jobs and education was proposed to be provided by inserting clause(6) in Articles 15 and 16 of the Constitution through the amendment passed by...

The Supreme Court on Wednesday decided to refer to Constitution Bench the petitions challenging the validity of Constitution 103rd Amendment which introduced provision for reservation to Economically Weaker Sections (EWS).

Economic reservation in jobs and education was proposed to be provided by inserting clause(6) in Articles 15 and 16 of the Constitution through the amendment passed by the Parliament in January 2019.

After the amendment was notified by the President, a batch of petitions were filed in the SC challenging the constitutional validity of economic reservation.

It was on July 31, 2019, that a 3-judge bench reserved its order on demands to refer pleas challenging the introduction of the quota for Economically Weaker Sections (EWS) to a Constitution Bench.

"Can the reservation exceed 50 per cent? Can there be reservation exclusively for the economically backward? These are points which raise substantial questions of law," Justice Bobde (as he was then) had remarked while leading the bench.

The bench was hearing a string of petitions challenging the validity of the EWS quota introduced by the 103rd Constitutional Amendment.

One of the primary contentions of the petitioners is that the additional 10% EWS quota surpasses the court-imposed upper-limit of 50% on reservations, 15%, 7.5% and 27% already standing allotted to the SC, ST and the OBC respectively.

The Tamil Nadu Assembly had passed the Backward Classes, Scheduled Castes and Scheduled Tribes (Reservation of Seats in Educational Institutions and Appointments or Posts in the Services under the State) Act, 1993 maintaining its reservation at 69%. The statute was subsequently added to the Ninth Schedule of the Constitution to exclude judicial review of it.

"The concept of reservation based on the economic status has already been approved by this court in Society of Unaided Private Schools of Rajasthan v. UO", submitted the Attorney General.

"These rulings have already determined the question of Article 14. A larger bench is not required to be constituted for there is no other constitutional issue to decide...Articles 15(4) and 16(4) are not getting affected. But this is a welfare State- Article 46 obligates the State to provide for the poor", he advanced.

"But (the petitioners) are arguing that the Constituent Assembly only envisaged reservation in favour of the backward classes?", asked Justice Bobde.

"The Right to Free and Compulsory Education Act also grants 25% reservation to the poor under Article 21A. The (103rd) Amendment has nothing to do with the draft Constitution...Indira Sawhney noted that there could be exceptions to the 50% rule. Does catering to the educational needs of the poor in pursuance of the DPSPs not qualify as an exception?", he suggested.

The AG buttressed this submission with the recent decision of the Bombay High Court upholding the quota to the "socially and educationally backward" Maratha community, where the High Court observed that "in exceptional circumstances, the 50 per cent limit can be exceeded if it is based on quantifiable data"

Senior Counsel Rajeev Dhawan, for petitioner and Congress leader Tehseen Poonawalla, countered that the TN and Maharashtra cases involved amendments in the law which pertained to quota for the SC, ST and the OBC, and did not create a new class. Further, he asked if the 103rd amendment seeks to accord a fresh definition to "backward class", stating that the Parliament would not have the power to do so.

"Does the increase in the percentage of the reservation not affect the width of other rights? Will that not be a substantial constitutional question?", inquired Justice Bobde.

Refuting, the AG insisted that the aforesaid is a question of fact, not one of law. He reiterated that Indira Sawhney anticipated for there to be exceptions to the 50% cap on reservation and that Article 46 entrusts the State with the responsibility of the betterment of the economically-weak.

Senior Counsel Gopal Sankaranayanan, for the petitioner-organisation Youth for Equality, had also raised the concern regarding the infringement of the Article 14 right to equality- the 103rd Amendment extending the benefit of quota to the EWS, while the SC, ST and the OBC are deprived of it on account of the 'creamy layer'.

When Mr. Sankaranayan had wondered how EWS reservation could be enforced in the case of minority private institutions, Justice Bobde had commented that the classification as 'minority' was irrelevant as all communities have a section of poor.