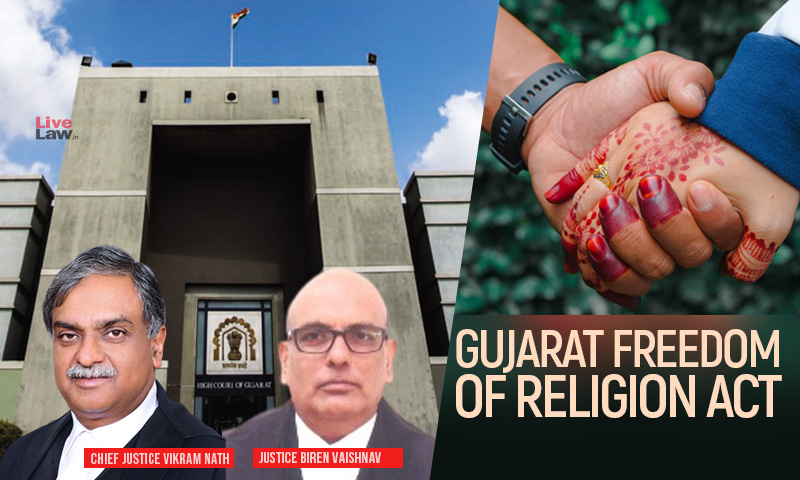 The Gujarat High Court on Thursday passed an interim order stating that the provisions of the Gujarat Freedom of Religion (Amendment) Act, 2021, will not apply to inter-faith marriages which take place without force, allurement or fraudulent means.A division bench comprising Chief Justice Vikram Nath and Justice Biren Vaishnav passed the interim order to protect the parties of...

The Gujarat High Court on Thursday passed an interim order stating that the provisions of  the Gujarat Freedom of Religion (Amendment) Act, 2021, will not apply to inter-faith marriages which take place without force, allurement or fraudulent means.

"After recording the preliminary submissions and arguments advanced, we have directed as follows. We are therefore of the opinion that pending further hearing, the rigours of Section 3, 4, 4A to 4C, 5, 6, and 6A shall not operate merely because marriage is solemnized by a person of one religion with another religion without force or allurement or fraudulent means and such marriages cannot be termed as marriages for the purposes of unlawful conversion. The above interim order is provided only on the lines of the arguments made by the learned Advocate General Mr.Trivedi  and to protect the parties of inter-faith marriage from being unnecessarily harassed".

The bench passed the order in a writ petition filed by Jamiat Ulama-E-Hind and Muhahid Nafees challenging the provisions of the Gujarat Freedom of Religion (Amendment) Act, 2021.

Senior Advocate Mihir Joshi assisted by Advocate MTM Hakim had appeared for the petitioners and Advocate General Kamal Trivedi appeared for Gujarat Government. The Court had reserved the case for pronouncement of interim orders for today after detailed arguments on August 5 and 17.

Observations by the Court in the order

The Court said that the interpretation advanced by the Advocate General that the Act only deals with conversions after inter-faith marriage by way of allurement, force or by fraud "may not be understood by the common man".

"The  submission of Mr. Trivedi, learned Advocate General that the element of fraud, allurement or coercion which is sought to be brought in by reading the Statement of Objects and Reasons and the other provisions of the 2003 Act, may not be understood by a common man. The interpretation of Section 3 of the 2003 Act as Mr. Trivedi, learned Advocate General wants us to read would be a subject matter of adjudication but prima facie on a plain reading of Section 3 of the 2003 Act, we feel that marriage inter-faith followed by conversion would amount to an offfence under the  2003 Act. Marriage itself and a consequential conversion is deemed as an unlawful conversion attracting penal provisions", the Court said.

The Court also referred to the Supreme Court's judgment in the case Shafin Jahan v. Ashokan (Hadiya case) which held the right to marry a person of one's choice was an integral part of the fundamental right under Article 21 of the Constitution.

The High Court said that the a common man might perceive every conversion due to inter-faith marriage as prohibited by the Act.

The Court further noted that the Act places the burden of proof on the accused and "puts the parties validly entering into an inter-faith marriage in great jeopardy".

"Prima-facie inter-faith marriages between two consenting adults by operation of the provisions of Section 3 of the 2003 Act interferes with the intricacies of marriage including the right to the choice of an individual, thereby infringing Article 21 of the Constitution Of India", the Court added.

The Amendment Act was notified on April 1 this year, in the lines of "anti-love jihad" laws brought by the States of Uttar Pradesh and Madhya Pradesh. The provisions of the Amendment Act are explained here.

The provisions dealt with by the court's interim order :

Section 3 of the Act prohibits forcible conversion from one religion to another by use of force or by allurement or by fraudulent means, however, now the amended Bill proposes to prohibit acts like forcible religious conversion by marriage or aiding a person to get married.

Section 3A enables any aggrieved person, his parents, brother, sister, or any other person related by blood, marriage or adoption may lodge an FIR with respect to an alleged unlawful conversion.

Section 4A prescribes punishment of imprisonment in the range of 3 to 5 years for unlawful conversion.

Section 4B declares marriages by unlawful conversion as void.

Section 6A places the burden of proof on the accused.

The Court has held that these provisions will not apply to inter-faith marriages based on free consent by adults.

The act was challenged as an invasion into personal autonomy, free choice, freedom of religion, and unlawful discrimination and hence violative of the fundamental rights under Articles 14, 21 and 25 of the Constitution. On August 5, the Court had heard arguments in the petition (report may be read here).

During the hearing, the bench had orally observed that religion and marriage were matters of personal choices. As per the stringent provisions of the Act, the moment a person makes an FIR against an inter-faith marriage, the persons can be send to jail. Also, the burden of proof is on the accused.

"..if someone gets married, you sent him to Jail then the State will satisfy itself that the marriage wasn't by force?", the bench had remarked during the hearing.