If Free Press Dies, Then Democracy Doesn't Have A Chance : Seema Chishti 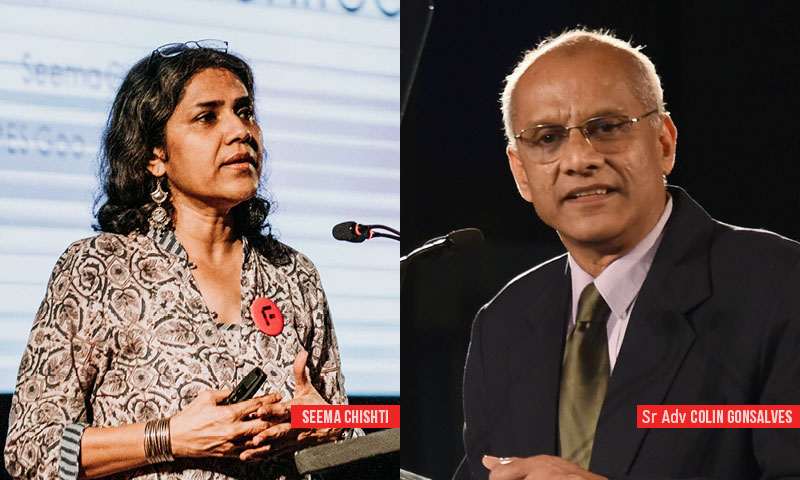 "Earlier, till the point of the murder of Gauri Lankesh, people were going after journalists in an unlawful manner. But, now, people are using the law to go after them", said Deputy Editor of Indian Express, Seema Chishti at an e-seminar organized by the LiveLaw on the topic "Shooting the Messenger: The 'Chilling Effect' of Criminalising Journalism"."At the risk of sounding over the top, if...

"Earlier, till the point of the murder of Gauri Lankesh, people were going after journalists in an unlawful manner. But, now, people are using the law to go after them", said Deputy Editor of Indian Express, Seema Chishti at an e-seminar organized by the LiveLaw on the topic "Shooting the Messenger: The 'Chilling Effect' of Criminalising Journalism".

"At the risk of sounding over the top, if the free press dies, then our democracy doesn't have a chance. So, we need to protect our democracy by protecting free press", she said during the session.

Former Judge of the Supreme Court of India Justice Madan B. Lokur, Senior Advocate Dr. Colin Gonsalves, and Seema Chishti were the speakers at the e-seminar, which was moderated by Lawyer Malavika Prasad.

The e-seminar commenced with a discussion on the spate of FIRs which had been registered against journalists across the country under cognizable and non-cognizable offences such as Sections 124A and 188 of the Indian Penal Code. Such cases had the potential to stunt the freedom of press guaranteed under Article 19(1)(a) of the Constitution of India.

In this context, Chishti responded to Prasad's question on the constraints and setbacks faced by journalists during the lockdown by stating that the scenario in India was quite grim with India ranking at 142 on the World Press Freedom Index, with North Korea at 180.

With that in mind, the Senior Journalist elaborated upon four broad topics on the issue: 1. The Government's approach to journalists; 2. Issues posed due to technological challenges in media; 3. Negative public opinion regarding journalists; and 4. Lack of institutional support.

Chishti observed that government's approach to journalists had cultivated a situation wherein anyone questioning the government was held accountable.

"The government should have its say, of course. But, there are senior ministers who have called journalists 'Presstitutes'. Then we also have the general public opinion. When the Emergency was declared, newspaper editors were getting public support. We don't have that now. Public opinion is not on the side of the journalists. There is also no institutional support from Courts."

Sr. Adv. Dr. Colin Gonsalves, on the issue of sedition being used against journalists, agreed with Chishti regarding the chilling effect of the same.

"I agree with Ms. Chishti on how the use of law can have as much of a chilling effect as the use of a 'danda'. Sedition is very widely used and is not carefully monitored. Particularly in rural areas where they have little access to representation."

Gonsalves iterated a case of the Chief Minister of Manipur filing a case of sedition against a journalist for using an expletive against him. He stated that the judgement of Kedar Nath Singh v. State of Bihar (1962) was poorly worded and, therefore, the law of sedition was being applied so indiscriminately.

With regard to enactment of new laws to protect journalists, both Chishti and Gonsalves were reluctant. While the former observed that the enactment of new laws was futile as it was interpretation and use of the laws that mattered, the latter questioned the incumbent government's adeptness at being able to promulgate a law that would facilitate the freedom of press.

Chishti emphasized on the need of a robust judiciary discharging an onerous responsibility to protect a journalist, or any individual asking questions.

"We need spine, we need a good attitude. We need to do away with the dichotomy of 'are you national, are you anti-national'. We need an attitude shift so as to refresh our perception of democracy. Of course, the government will put pressure and the mobs will come in the way. This is why the judges need to be sensitized."

Gonsalves also spoke on the accountability on behalf of Magistrates, with regard to the recent case of custodial death that took place in Tamil Nadu wherein a father-son duo were tortured to death by policemen during an investigation for an alleged violation of lockdown curfew.

"It's not just the Magistrate, but we must all be vigilant. Some judges have to some extent come very close to the Executive. In that case, it is our duty to be vigilant, resolute and to never give up. Take the NHRC; it's such an inert institution. We cannot wait for someone else. We need to come forward and take responsibility. Then only we will see the magic of India."

@DColinGonsalves: Journalists from rural areas said that they felt alone and isolated when they were attacked. We must use the existing law. We cannot trust the govt. to make a new law; they will twist it and make the most draconian legislation.