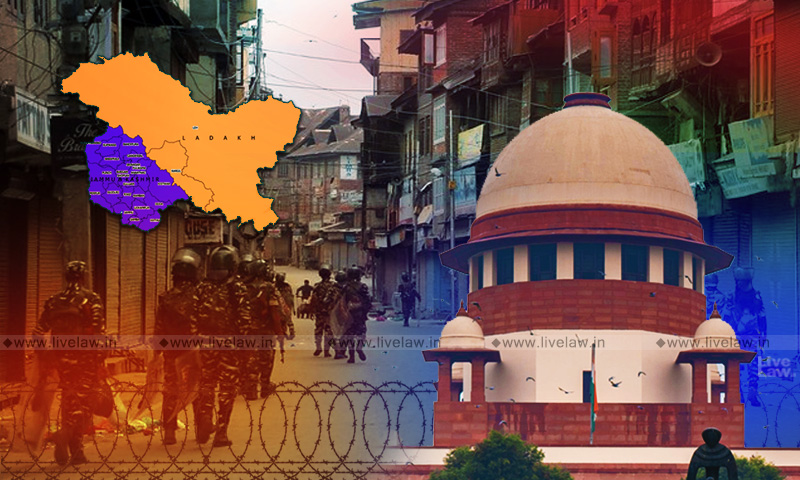 In the judgment on Kashmir lockdown, the Supreme Court has criticized the Central Government for not producing before it the orders which imposed curbs in Jammu & Kashmir region in the wake of abrogation of the special status of the state on August 5.The Court observed that the prohibitory orders passed under Section 144 of Code of Criminal Procedure, and the internet shut down orders...

In the judgment on Kashmir lockdown, the Supreme Court has criticized the Central Government for not producing before it the orders which imposed curbs in Jammu & Kashmir region in the wake of abrogation of the special status of the state on August 5.

On October 16, 2019, the bench led by Justice Ramana had directed the Centre to produce the orders.

But the Government only produced some sample orders, citing difficulty in producing the numerous orders which were being withdrawn and modified on a day­ to ­day basis.

The Centre also claimed that the prayer to produce the orders was an expansion of the scope of the present petitions.

But this contention was rejected by the top court by noting that the writ petitioners had sought for a specific prayer for production of orders.

The Court also referred to the observations in the 2011 SC decision in the case Ram Jethmalani v Union of India that "in a writ proceeding, petitioners should not be denied the information necessary for them to properly articulate the case and be heard, especially where such information is in the possession of the State".

It further observed that a democracy, which is sworn to transparency and accountability, necessarily mandates the production of orders as it is the right of an individual to know. It added that the State has to act in a responsible manner to not to take away the Constitutional rights in an "implied fashion or in casual and cavalier manner".

"As a general principle, on a challenge being made regarding the curtailment of fundamental rights as a result of any order passed or action taken by the State which is not easily available, the State should take a proactive approach in ensuring that all the relevant orders are placed before the Court, unless there is some specific ground of privilege or  countervailing public interest to be balanced, which must be specifically claimed by the State on affidavit", the Court observed.

In this case, the State had initially made a claim of privilege, which was later dropped. The State then produced certain sample orders, citing difficulty in producing all orders. The Court observed that this difficulty was not a valid ground to refuse production of orders before the Court (para 18).

"In the present case, while the State initially claimed privilege, it subsequently dropped the claim and produced certain sample orders, citing difficulty in producing all the orders before this Court. In our opinion, this is not a valid ground to refuse production of orders before the Court."

The State justified the restrictions by citing the historical background of terrorism in J&K, and said that the orders were passed in such context in anticipation of law and order issues.

But the Court observed the Section 144 Orders produced before it "do not explain such aspects" (para 137).

The Court went on to state that even though the restrictions were stated to have been removed on September 27, 2019, it "cannot ignore non ­compliance of law by the State".

"Although the restrictions have been allegedly removed on 27.09.2019, thereby rendering the present exercise into a virtually academic one, we cannot ignore non­-compliance of law by the State. As learned senior counsel Mr. Kapil Sibal submitted, this case is not just about the past or what has happened in the erstwhile State of Jammu and Kashmir, but also about the future, where this Court has to caution the Government.

Hence, we direct that the authorities must follow the principles laid down by this Court and uphold the rule of law (para 138)."

The Court ultimately directed to publish all orders in force and any future orders under Section 144, Cr.P.C and for suspension of telecom services, to enable the affected persons to challenge it before the appropriate forum.

The Court said that publication of the orders was necessary to enable aggrieved persons to challenge the same.

Although the Suspension Rules did not specifically prescribe the requirement of publication, the Court read into such a condition into the Rules. It said :

"It must be noted that although the Suspension Rules does not provide for publication or notification of the orders, a settled principle of law, and of natural justice, is that an order, particularly one that affects lives, liberty and property of people, must be made available. Any law which demands compliance of the people requires to be notified directly and reliably. This is the case regardless of whether the parent statute or rule prescribes the same or not. We are therefore required to read in the requirement of ensuring that all the orders passed under the Suspension Rules are made freely available, through some suitable mechanism (para 96)."

The Court added that this requirement "would further the rights of an affected party to challenge the orders, if aggrieved."

The Court also expressed helplessness in adjudication as all orders were not produced.

"As all the orders have not been placed before this Court and there is no clarity as to which orders are in operation and which have already been withdrawn, as well as the apprehension raised in relation to the possibility of public order situations, we have accordingly moulded the relief in the operative portion (para 102)".

The bench, also comprising Justices Surya Kant and B R Gavai, had reserved the judgment on November 27. The Court has now directed the competent authorities of J&K administration to review the restrictive orders within a week, in the light of the principles laid down in the judgment.