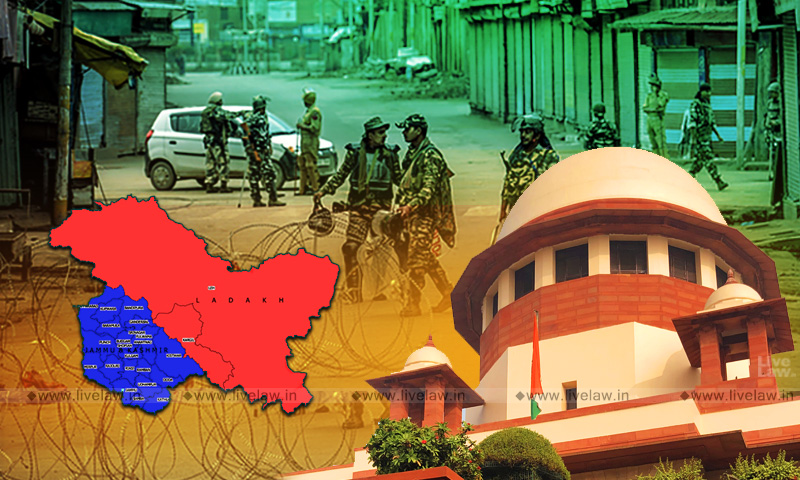 "Repetitive orders under Section 144, Cr.P.C. would be an abuse of power."

In its judgment in Kashmir Lock Down case, the Supreme Court observed that the power under Section 144 of the Criminal Procedur cannot be used as a tool to prevent the legitimate expression of opinion or grievance or exercise of any democratic rights.

The Court said that provisions of Section 144, Cr.P.C. will only be applicable in a situation of emergency and for the purpose of preventing obstruction and annoyance or injury to any person lawfully employed.

"As emergency does not shield the actions of Government completely; disagreement does not justify destabilisation; the beacon of rule of law shines always", the bench observed thus while starting its discussion about the restrictions under Section 144 CrPC.

Section 144 CrPC Power exercisable also when there is an apprehension of danger.

One of the arguments raised on behalf of the petitioners was that such orders under Section 144 CrPC passed in mere anticipation or apprehension cannot be sustained in the eyes of law. Rejecting the same, the bench adverted to Babulal Parate case wherein it was held that the power conferred by the section is exercisable not only where present danger exists but is exercisable also when there is an apprehension of danger. But the Court qualified it by saying that the 'danger' must be in the nature of 'emergency' and for the purpose of preventing obstruction and annoyance or injury to any person lawfully employed.

On the concern expressed by Senior Advocate Kapil Sibal that in the future any State could pass such type of blanket restrictions, for example, to prevent opposition parties from contesting or participating in elections, the bench said:

" In this context, it is sufficient to note that the power under Section 144, Cr.P.C. cannot be used as a tool to prevent the legitimate expression of opinion or grievance or exercise of any democratic rights. Our Constitution protects the expression of divergent views, legitimate expressions and disapproval, and this cannot be the basis for invocation of Section 144, Cr.P.C. unless there is sufficient material to show that there is likely to be an incitement to violence or threat to public safety or danger. It ought to be noted that provisions of Section 144, Cr.P.C. will only be applicable in a situation of emergency and for the purpose of preventing obstruction and annoyance or injury to any person lawfully employed [refer to Babulal Parate case (supra)]. It is enough to note that sufficient safeguards exist in Section 144, Cr.P.C., including the presence of judicial review challenging any abuse of power under the Section, to allay the apprehensions of the petitioner. "

Another contention raised was that 'law and order' is of a narrower ambit than 'public order' and the invocation of 'law and order' would justify a narrower set of restrictions under Section 144, Cr.P.C. On this, the bench, referring to various precedents, said:

"'law and order', 'public order' and 'security of State' are distinct legal standards and the Magistrate must tailor the restrictions depending on the nature of the situation. If two families quarrel over irrigation water, it might breach law and order, but in a situation where two communities fight over the same, the situation might transcend into a public order situation. However, it has to be noted that a similar approach cannot be taken to remedy the aforesaid two distinct situations. The Magistrate cannot apply a straitjacket formula without assessing the gravity of the prevailing circumstances; the restrictions must be proportionate to the situation concerned."

Power should be used responsibly

"Such a power, if used in a casual and cavalier manner, would result in severe illegality. This power should be used responsibly, only as a measure to preserve law and order."

Existence of the power of judicial review is undeniable

On the question whether there can be judicial review of such orders, the bench said thus:

It is true that we do not sit in appeal, however, the existence of the power of judicial review is undeniable. We are of the opinion that it is for the Magistrate and the State to make an informed judgement about the likely threat to public peace and law and 113 order. The State is best placed to make an assessment of threat to public peace and tranquility or law and order. However, the law requires them to state the material facts for invoking this power. This will enable judicial scrutiny and a verification of whether there are sufficient facts to justify the invocation of this power.

In a situation where fundamental rights of the citizens are being curtailed, the same cannot be done through an arbitrary exercise of power; rather it should be based on objective facts. The preventive/remedial measures under Section 144, Cr.P.C. should be based on the type of exigency, extent of territoriality, nature of restriction and the duration of the same. In a situation of urgency, the authority is required to satisfy itself of such material to base its opinion on for the immediate imposition of restrictions or measures which are preventive/remedial. However, if the authority is to consider imposition of restrictions over a larger territorial area or for a longer duration, the threshold requirement is relatively higher.

An order passed under Section 144, Cr.P.C. should be indicative of proper application of mind, which should be based on the 114 material facts and the remedy directed. Proper reasoning links the application of mind of the officer concerned, to the controversy involved and the conclusion reached. Orders passed mechanically or in a cryptic manner cannot be said to be orders passed in accordance with law.