"Learn To Trust Your Judges":CJI To Harsh Mander [Courtroom Exchange] 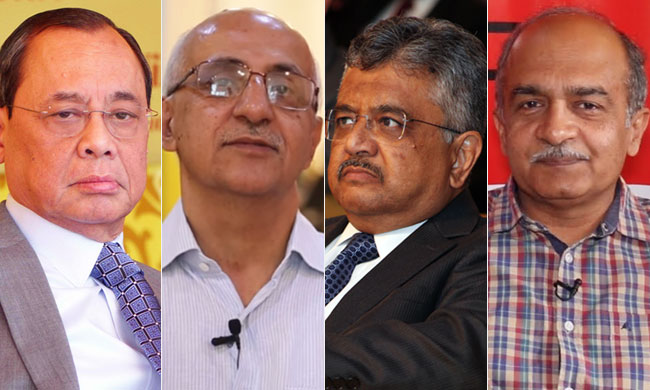 "Have you filed an affidavit?", asked Chief Justice Ranjan Gogoi at the outset.

When petitioner-activist Harsh Mander replied in the affirmative, the Chief Justice asked him what time he had filed it.

"Yesterday. But they asked us to submit it in court", answered Mander.

"You don't submit an application in court. This is not a filing counter. Normally we don't allow this but we understand your anxiety, that you have some grievance so we will dispense with the formality", allowed the Chief Justice.

"You had a counsel? Who was it?", asked the judge.

Mander replied that Advocate Prashant Bhushan was appearing for him who he has now discharged.

"Please say fearlessly and freely what you want to say. We don't want you to read out from text. Keep the text away and speak from your heart", observed Chief Justice Gogoi.

When Mander expressed his respect to the judges, the Chief Justice commented that respect for the judges is shown through actions and conduct and not words.

Mander then cited certain observations of the Chief Justice at the previous hearings as to why the detention centres held only a handful of the illegal immigrants declared as foreigners, and certain others in respect of the state of Assam's proposal for the release of declared foreigners from detention centres upon furnishing of a bond and/or sureties.

"You want to allow a man who is deemed to be a foreigner to stay after he executes a bond. You want the Supreme Court to be a party to an illegal order?", the Chief Justice had said as reported in The Hindustan Times.

Mander said that the Chief Justice had described such a proposition to be against the law and the Constitution and mentioned disciplinary proceedings against the Chief Secretary of Assam.

Advancing that detention could not be indefinite and that the right to life and personal liberty exists for non-citizens as well, Mander had sought Chief Justice Gogoi's recusal from the matter. He submitted that on account of these oral observations, there are implications in the state of Assam and arrests are being made and that if there is some "subconscious bias", the Chief Justice may consider recusing.

"The state of Assam came up with a proposal that after five years, they can leave subject to certain conditionalities...A judge says a lot of things to test the waters...What was said in a healthy debate was understood by you as an opinion. The opinion is in the order. You are quoting from sentences exchanged in the debate...the main matter is pending before this court. How can you say the court has decided the matter? That the CJ has prejudged? Is this fair? You want to serve the country, is this how you serve the country?"

"There are Oral observations in hundreds of cases as part of the debate...You are unaware (of the realities). That is why you shouldn't become a lawyer yourself. This is why We don't allow laypeople to get into the intricacies of proceedings...Learn to Trust your judges! The day you don't trust your judges, you've had it!", reflected the Chief Justice.

"What if we say you have been set up by the state of Assam to file this? That the Chief Secretary, to avoid disciplinary proceedings, has prevailed on you? How will you defend that?", continued the judge.

"Simply by saying that it is untrue", responded Mander.

As he insisted that he stands by his anxiety, the Chief Justice remarked,

"See what damage you have done in your endeavour"

Indicating the prayers in the plea, the Chief Justice noted, "the (consideration of the) Refugee status is pending. The others as to the conditions of detention centres and (detention for long periods), we are examining. The Court is not entitled to ask where (the other immigrants declared as foreigners but not in these centres) are? If it does so, the court has made up its mind?"

"No, Mr. Mehta, we won't hear you. Is this how it works? The litigant questions the impartiality of the Chief Justice? The Handicap to take up a matter?"

Indicating the earlier orders in the matter where judicial attention was on the living conditions and the long detention, Justice Sanjiv Khanna also asked,

"Can you understand what the court was asking? Have you seen the questions framed? Does this express the concern of the court or not?"
"Just because the court doesn't agree with you on certain matters, you seek recusal? This is not acceptable", added Justice Deepak Gupta.

"If you were not in court (at the earlier hearings), where did you get all these statements?"

You are a social worker...You pick it (the remarks) up from social media and throw it at the Chief Justice? What will happen when the institution crumbles? Where will you be?"

"When we ask questions, we want them to be answered. Till the order is passed, there can be change", weighed in Justice Khanna. "Even after the ink has dried, we review it. We make open court reviews", added Chief Justice Gogoi.

At this point, the SG submitted that the Chief Secretary had come to know about this application for recusal when Mr. Mehta had told him, and that his immediate reaction was to oppose it but he had to seek instructions from government first.

"Not only it this application not maintainable, but it is scandalous! More than an apprehension of bias, it is contemptuous!", urged the SG.

Drawing the bench's attention to a portion of the plea (which Chief Justice Gogoi insisted he need not hesitate to read in open court), the SG expressed shock at the averment beginning with "the Hon'ble Chief Justice through his actions is using the petition..."- "The court is using?!", the SG said, outraged.

"This is forum shopping! It is well-drafted, Judgments are quoted! It is not like he (Mander) doesn't know...Is he coming here for justice or for delivering lectures as to what the court should be doing? You can get up as a public-spirited citizen and spit venom on anybody?", advanced the SG.

When he sought to hand over some judgement to buttress his case against recusal, the Chief Justice said,

"What are you opposing? Don't even remotely think we will recuse. Recusal is destruction of the institution. We are only discussing what else we will do. We will not allow anybody to browbeat this institution!"

Proceeding to pass the order, Chief Justice dictated that the inability, difficulty or the handicap of a judge to hear a matter is to be considered by the judge himself and not by the litigant , and the grounds raised by Mander have enormous potential of causing damage to the institution.

Dismissing the recusal application, the bench directed the registry to strike off Mander's name as the petitioner and substitute the Supreme Court Legal Services Committee in its place and appointed Mr. Bhushan as the Amicus Curiae on limited issue of the detention centres.