"We Will Not Allow Any One To Disrupt The Institution", CJI Refused To Recuse From Hearing Assam Detention Centre Case, Instead Removes Harsh Mander From Petitioner's Place 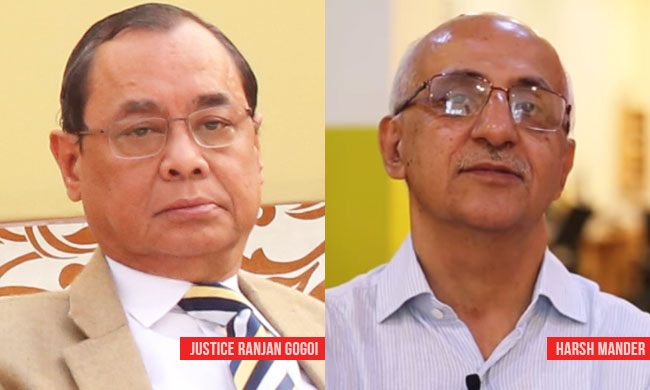 The Chief Justice has refused to recuse from hearing.

Mander's previous Counsel Prashant Bhushan has been appointed as the Amicus Curie in the case.

Mander filed the application demanding the recusal of Chief Justice RanjanGogoi  from hearing the Writ Petition in the interest of justice, in the larger interest of the institution.

He also submitted that he is no longer using the legal services of Advocate Prashant Bhushan in this case.

He submitted that he had filed the petition seeking the compassion, humanity and the commitment of Supreme Court in upholding international Human rights regimes as well as its own tradition of safeguarding and guaranteeing human rights enshrined in India's Constitution for all human beings not just its own citizens.

According to him, the comments and oral observations made by the Hon'ble Justice Ranjan Gogoi when the matter has come up for hearing before this Hon'ble Court has raised a serious apprehension in the mind of the Applicant that there is the possibility of a bias affecting the outcome of the Petition.

"The Statements made by the Hon'ble Judges of the Supreme Court have a ripple effect not just within the judiciary of the country but amongst the public at large and therefore need to be made with responsibility and more gravitas than an off the cuff remark by any other citizen of the country".

He further submitted that he apprehends that his petition seeking humane treatment of the foreigners and alleged foreigners in detention camps and the ending of their indefinite detention, in accordance with their fundamental right to life under Article 21 of the Constitution, appears to have been turned on its head by the Chief Justice who, by his remarks and observations in a series of hearings, appears to use the same petition instead to seek detention of tens of thousands of more persons in these detention centres, and the repatriation of deemed foreigners by the State of Assam without ensuring that the principle of Rule of Law and the international law principle of non-refoulement are adhered to.

"The Statements made by the Hon'ble Supreme Court have been used by political parties to target the State of Assam and create an atmosphere of bias against the alleged foreigners by seeking their indefinite detention and deportation.
It is respectfully submitted that even if the decision is likely to be influenced subconsciously due to the following reasons, as apprehended genuinely by the Applicant, Hon'ble Mr. Justice Ranjan Gogoi may recuse himself in the interest of justice".