No Levy Of Sales Tax On Supply Of Food & Drinks By Clubs To Its Members : SC [Read Judgment] 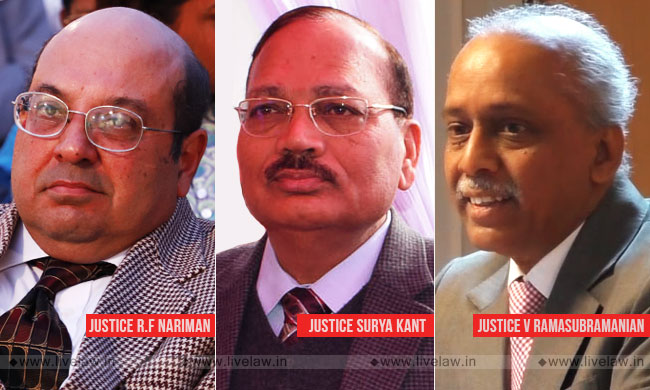 The Supreme Court has held that there is no levy of sales tax on the supply of food and beverages by members' clubs, whether incorporated and unincorporated, to its members. Answering a reference in the case State of West Bengal v Calcutta Club Ltd, a three judges bench comprising Justices R F Nariman, Surya Kant and Rama Subramanian held that the "doctrine of mutuality" , as propounded...

The Supreme Court has held that there is no levy of sales tax on the supply of food and beverages by members' clubs, whether incorporated and unincorporated, to its members.

Answering a reference in the case State of West Bengal v Calcutta Club Ltd, a three judges bench comprising Justices R F Nariman, Surya Kant and Rama Subramanian held that the "doctrine of mutuality" , as propounded in the case CTO v. Young Men's Indian Assn., (1970) 1 SCC 462, continued to operate even after the 46th amendment to the Constitution which inserted Article 366(29-A).

Article 366(29A) created a deeming fiction to hold that certain transactions will be treated as 'sale'. Its clauses (e) and (f) were relevant for this case. They are :

The issue before the bench was whether supply of food and drinks by a members club can be treated as supply of goods by any unincorporated association or body of persons to a member under Art.366(29A)(e).

The Court also considered whether such supply will fall within the ambit of clause (f), which treats supply of food and drinks for consideration as 'deemed sale'.

If the class of persons who are carrying out an activity and the consumers who take the benefits out of such activity are the same, 'doctrine of mutuality' will apply with respect to tax liability arising out of such activity. If there is commonality between the contributors of the fund and participants in the activity,  a complete identity between them is established. There is mutuality of identity between a club and its members as regards the services. Therefore, the supply of services by a club to its members cannot be treated as 'sale' as there cannot be a sale to oneself - this is the doctrine of mutuality.

The question before the Court was whether this 'Doctrine of Mutuality' survived after the fiction of deemed sale created by 46th Amendment through Article 366(29A).

It noted that the the expression "any unincorporated association or body of persons" in Article 366(29A)(e) made it clear that it was only clubs which are not in corporate form that were sought to be brought within the tax net. This was because it was wrongly assumed that sale of goods by members' clubs in the corporate form were taxable.

It noted that the Statement of Objects and Reasons of the 46th Amendment Act had an error in that it did not read the case of Young Men's Indian Association in its correct perspective. Young Men's case involved a company and not a club. To state that under the law as it stood on the date of the 46th Amendment, a sale of goods by a club having a corporate status to members is taxable, is wholly incorrect, the Court said.

Sale tax liability of the club for its services is not dependent on its corporate status.

Referring to the definition of "consideration" in Section 2(d) of the Contract Act, the Court said that it has to pass from one person to another.

But there is no sale transaction between a club and its members, as there cannot be a sale of goods to oneself. So, the Court held that Article 366(29A)(e) did not apply.

The club is acting as an agent of its member and there is no element of transfer in the supply of services by it to the members. There is no 'seller' or 'buyer' here for passing of consideration.

As regards clause (f), the Court said that the clause was introduced to bring within the tax net supply of food and drinks in hotels and restaurants by nullifying certain judgments.

"It is clear that the reason for sub-clause (f), as has been stated in the Statement of Objects and Reasons, is the doing away with of two judgments of this Court, namely, State of Punjab v. Associated Hotels of India Limited AIR 1972 SC 1131 and Northern India Caterers (India) Ltd. (supra). The 46th Amendment Act, therefore, when read as a whole, would make it clear that Article 366(29-A)(f) refers only to an undoing of the aforesaid two judgments, the subject matter being the taxability of food or drink served in hotels and restaurants. This being the case, it is obvious that the taxability of food or drink served in members' clubs is not the subject matter of sub-clause (f)"

The Court arrived at the following conclusions:

(1) The doctrine of mutuality continues to be applicable to incorporated and unincorporated members' clubs after the 46th Amendment adding Article 366(29-A) to the Constitution of India.

(2) Young Men's Indian Association (supra) and other judgments that applied this doctrine continue to hold the field even after the 46th Amendment.

The Court also ruled on the service tax liability of clubs as regards supply of foods and drinks, which is dealt by a separate story.

Senior Advocates Rakesh Dwivedi and Jaideep Gupta appeared for the appellants and respondents in the case respectively.