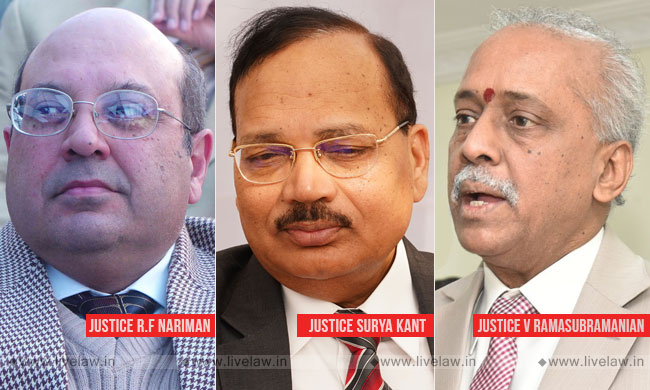 x
The 'doctrine of mutuality', which is applicable to clubs in the context of sales tax for supplies to members, is applicable "on all fours to service tax"

The Supreme Court has held that services given by an incorporated club to its members are exempted from service tax.In the case Chief Commissioner of Central Excise & Service and others v Ranchi Club Ltd, the bench comprising Justices R F Nariman, Surya Kant and Ramasubramanian upheld the judgments of High Courts of Gujarat and Jharkhand which ruled out service tax liability on clubs...

The Supreme Court has held that services given by an incorporated club to its members are exempted from service tax.

In the case Chief Commissioner of Central Excise & Service and others v Ranchi Club Ltd, the bench comprising Justices R F Nariman, Surya Kant and Ramasubramanian upheld the judgments of High Courts of Gujarat and Jharkhand which ruled out service tax liability on clubs for service to their members on the reasoning that there were no distinct legal entities of 'service provider' and 'service recipient' in a transaction between a members' club and its members.

The Gujarat High Court had declared ultra vires Section 65(25a), Section 65(105) (zzze) and Section 66 of the Finance (No.2) Act, 1994 as amended by the Finance Act, 2005 to the extent the said provisions levied service tax in respect of services  provided by a club to its members.

Upholding the judgments of Gujarat and Jharkhand High Courts, the Supreme Court observed:

"We are also of the view that from 2005 onwards, the Finance Act of 1994 does not purport to levy service tax on members' clubs in the incorporated form".

Members' clubs that have been registered as Companies under Section 25 of the Companies Act, or registered co-operative societies under various State Acts etc., were parties in the appeals from the above judgments.

The Revenue argued that the 'Doctrine of Mutuality', as applicable in sales tax, was not applicable to service tax, especially after the statutory changes in the Finance Act. In 2005, service tax was introduced for clubs. But clubs in incorporate forms were exempted. After the statutory amendments in 2012 to the Finance Act, which expanded the list of services liable to tax, even incorporated bodies were brought under the tax net, the Revenue contended.

The definition of "club or association" contained in Section 65(25a), until amendment in 2012, said that any person or body of persons providing services for a subscription or any other amount to its members would be within the tax net. However, any body "established or constituted" by or under any law for the time being in force, was not included in the definition.

"companies and cooperative societies which are registered under the respective Acts, can certainly be said to be constituted under those Acts. This being the case, we accept the argument on behalf of the Respondents that incorporated clubs or associations or prior to 1st July, 2012 were not included in the service tax net", said the judgment.

No Levy Of Sales Tax On Supply Of Food & Drinks By Clubs To Its Members : SC [Read Judgment]

The next question was whether the situation changed after 1st July, 2012.

The definition of "person" under Section 65B(37) was changed to include any association of persons or body of individuals whether incorporated or not.

In this regard, the Court held that the the 'doctrine of mutuality', which is applicable to clubs in the context of sales tax for supplies to members, was applicable "on all fours to service tax". The same judgment, in its earlier part, had held that the 'doctrine of mutuality' continued to operate with respect to supply of food and drinks by clubs to members, notwithstanding the fiction of deemed sale created by insertion of Article 366(29A) in the Constitution.

"We have seen how in the judgment relating to sales tax, the fact is that in members' clubs there is no sale by one person to another for consideration, as one cannot sell something to oneself. This would apply on all fours when we are to construe the definition of "service" under Section 65B(44) as well", the SC said.

The Court noticed that Finance Act of 2006 has inserted an Explanation to Section 65 stating that "taxable service includes any taxable service provided or to be provided by any unincorporated association or body of persons to a member thereof for consideration".

The Court noted that "club or association" was earlier defined under Section 65(25a) and 65(25aa) to mean "any person" or "body of persons" providing service.

Explanation 3 to Section 65B(44) after 2012 also uses the phrase "body of individuals". In this context, the Court observed :

"We have already seen how the expression "body of persons" occurring in the explanation to Section 65 and occurring in Section 65(25a) and (25aa) does not refer to an  incorporated company or an incorporated cooperative society. As the same expression has been used in Explanation 3 post-2012 (as opposed to the wide definition of "person" contained in Section 65B(37)), it may be assumed that the legislature has continued with the pre-2012 scheme of not taxing members' clubs when they are in the incorporated form. The expression "body of persons" may subsume within it persons who come together for a common purpose, but cannot possibly include a company or a registered cooperative society. Thus, Explanation 3(a) to Section 65B(44) does not apply to members' clubs which are incorporated".