"No Supporting Documents Produced" : Supreme Court On PIL Against State Control Of Temples 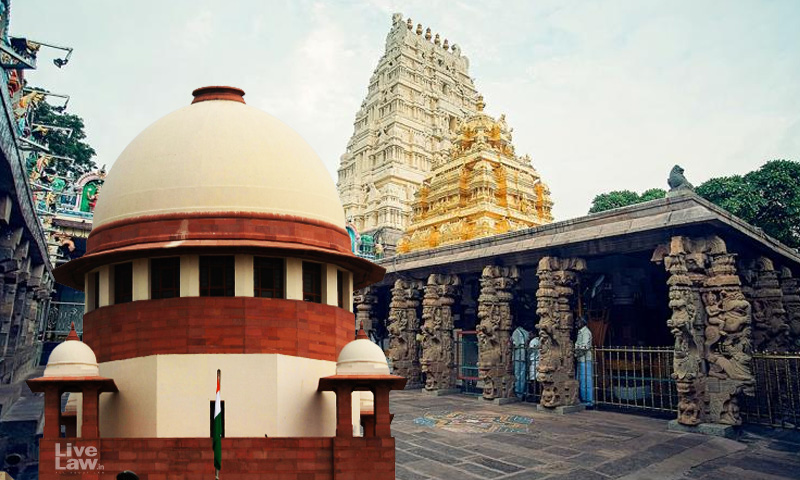 The Supreme Court, on Thursday, while hearing a PIL seeking to declare that Hindus, Buddhists, Jains and Sikhs have similar rights to administer their religious places without State interference like Muslims, Parsis and Christians, orally remarked that the petition was not supported by any material. A bench comprising Chief Justice U.U. Lalit and Justice Ravindra Bhat was hearing a petition...

The Supreme Court, on Thursday, while hearing a PIL seeking to declare that Hindus, Buddhists, Jains and Sikhs have similar rights to administer their religious places without State interference like Muslims, Parsis and Christians, orally remarked that the petition was not supported by any material.

A bench comprising Chief Justice U.U. Lalit and Justice Ravindra Bhat was hearing a petition filed by former BJP Delhi Spokesperson Ashwini Upadhyay. Apart from the above declaration, the petition also sought to strike down laws made by all states to regulate temple endowements as violative of Articles 14, 15 and 26 of the Constitution.

Senior Advocate Arvind Datar, appearing for the petitioner, at the outset, stated that the petition had challenged the Endowment Acts of all states. Pointing out that the regulation only existed for Hindus, he stated that either regulation should exist for all religions or regulation for Hindus alone should stop. He stated that Article 29 and 30 of the Indian Constitution only protected the cultural and educational rights of the minorities, and nothing else. Citing the example of the Tamil Nadu Hindu Religious and Charitable Endowements (HR&CE) Act, Datar submitted that it allowed the State to "virtually manage and control the temples".

He traced the history of the issue by stating that the first act controlling temples came in 1862, which was perhaps due to colonial era as at that time they did not want to control churches. This was followed by another act in 1883 and then Madras Act in 1927. Sr. Adv. Datar stated that most of these acts were similar in the aspects pertaining to management, audit prescriptions and appointment of persons.

Senior Advocate Gopal Sankaranarayanan, also appearing for the petitioner, added that the petition showed that in Karnataka, 15,000 temples closed down. He stated that this was because state was in-charge of running the temples and there were serious cases of mismanagement.

To this, CJI Lalit enquired if the petitioner had any official document (other than the statements made in the petition) which showed that 15,000 temples in Karnataka had been shut down. He said that–

"Did you make any representation? Did you call for any such information? Will we just be going on the basis of averments made by you in the petition?...We will be taking cognisance of something which are sweeping statements. We are not saying they're false statements but at least give some material."

Sr. Adv. Sankaranarayanan, to this, stated that while they had not submitted material in support of these averments, apart from the factual issues, there were much bigger legal issues to be considered by the court in the matter. The petitioners stated that there were concrete examples, such as that of Andhra Pradesh, where out of 83000 crores of Tirupathi's income, 7% was spent.

To this, Justice Bhat stated–

"This could be a debate. After all, if it is meant for receipt of a temple, it's by the people, so it has to go back to the people in some form. So the city of Tirupathi, the town of Tirupathi is benefitted. You have universities, you have whole range of services which have come up. This is also through state enterprise (other than private endowments)...We have colleges in Delhi set up...The point is the scale of offerings, maybe in Tirupathi or even in Shirdi is so colossal...Are you suggesting that it should be out of the scale of regulation? Or it should be only with those centres?"

"We are saying that the scale should exist for everybody. In a secular state, you have to distance church from the State. If the State is proximate to one religion, that's a problem and we have to correct it. We are saying that strike down legislations which violate Article 14."

"You are saying that wealth that is generated, nobody is there to regulate, nobody or no law to account to, nobody to audit this and you would be centers of power in your own way...See you can't compare with other religions. They may have their own systems of checks and balances; we don't know that. But the scale is definitely different."

Sr. Adv. Sankaranarayanan gave an example of the Padmanabhaswamy temple case, where he stated that issues arose. He said that in the given case a PIL was filed stating that there was mismanagement and that it was necessary to have members of a given faith ensuring that the system of checks and balances is followed. CJI Lalit replied that in the Padmanabhaswamy temple case, there was a concession made by the person concerned that the temple was not a private temple and rather, a public temple.

"Today, an 1852 act is 150 year old history...These temples, these places of worship or denominations have functioned in a particular way; which means that they have catered to the larger needs of the society, not only their temples. After all, why did we have the Inams abolition? You are virtually rolling the clock back because all these temples had become places of wealth. Some of them gave it up voluntarily. But now if we have to roll back, that is exactly the point we will reach. There has to be some framework that everything will not be used by the centre but it will go back to the people."

"You are not giving us any kind of figures or violations or infirmities as against a statute and saying that the mandate of the statute is not getting complied...Bare averments and beyond that nothing. We don't even have the provisions quoted here...Pardon me, I would like to be wrong on the safer side but there must be material in support of this."

The petitioners asked for two weeks to file materials. Accordingly, the matter was adjourned for 19th September.

The Court also heard a petition filed by Swami Jeetendranad Saraswatee, a Hindu sanyasi. "85% of funds are being misappropriated", the petitioner submitted.

The Court pointed out that the persons who allegedly misappropriated the funds have not been made parties to the case.

As per the petition of Upadhyay, the cause of action for the petition arose on 10.04.2016 when a 1000 year old temple built by King Rajendra Chola-I in Thanjavur district of Tamil Nadu was pulled down by the State "under the garb of renovation". The petition alleges that the government stated that the temple was just dismantled and would be put together again which never happened. The petition has highlighted other such instances, for example, in May 2010, as per the petition, the temple tower of a 500-year-old Kalahasti temple in Andhra Pradesh, built by King Krishna Deva Raya of Vijayanagara collapsed. As per the petition a UNESCO report raised alarm that the Tamil Nadu government, which manages around 30,000 temples, neither had the capacity nor qualified experts to carry out conservation, leading to massacre of ancient temples. The petition submits that the injury to Hindus, Jains, Buddhists and Sikhs is extremely large because state governments are controlling temples and gurdwaras but not the most sent churches. The petition states that–

"The State acts can only be called 'state-sanctioned violence' acquire colours of apartheid when compared with the rights of other religions."

Accordingly, the petition has prayed the court to declare that Hindus, Jains, Buddhist and Sikhs have similar rights to establish, manage and maintain the religious places and to own, acquire and administer movable and immovable properties of their religious places just like Muslims and Christians. It further states that laws made to administer properties of temples and gurdwaras are arbitrary and violate article 14, 15, 26. The petition states that if necessary, the court should direct the Centre or the Law commission of India to draft a common charter for religious and charitable institutions and Uniform Code for Religious and Charitable Endowments.