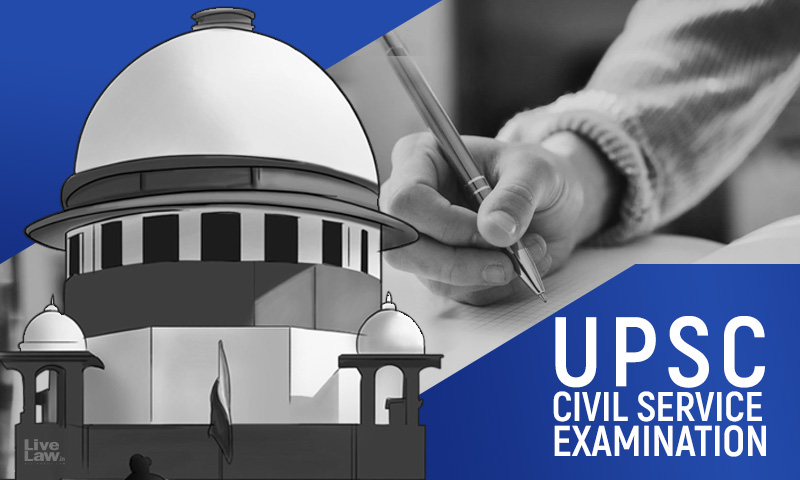 The Supreme Court on Wednesday dismissed the petition seeking extra chance in UPSC civil service exams for the candidates who had exhausted their last attempt in October 2020.

The petitioners, who had given their last attempt in Civil Service Examination 2020, had sought for an extra chance citing difficulties created by COVID-19 pandemic and the national lockdown. The petitioners argued that the pandemic affected their preparation and sought for extra attempt.

Justice AM Rastogi, who read out the operative part of the judgment, appreciated the efforts of the Advocate on Record of the petitioner, Anushree Kapadia.

"You argued well. You were clear on facts", the judge told the lawyer.

The Centre had initially made an offer to give extra attempt, subject to the age-bar. However, the petitioners argued for age-relaxation as well. Thereafter, the bench decided to hear the case on merits.

On 9th February, 2021, a Bench comprising Justices AM Khanwilkar, Indu Malhotra and Ajay Rastogi had reserved judgment in the matter(Rachna v Union of India).
WHAT DID THE COURT SAY?

The Court observed that the question before them was whether the Petitioners/Intervenors and other similarly placed candidates are entitled to another/additional chance for CSE 2021 on account of the unprecedented COVID-19 pandemic.

The Judgement states that while what is prayed by the Petitioners "in the first blush appears to be attractive but it lacks legal strength and foundation for various reasons".

The Judgement states that the State Commissions/recruiting agencies must have conducted their examinations/recruitment tests for various services and merely because the present Petitioners have made a complaint to the Court, their prayer cannot be taken into isolation and does not give them a legitimate right to claim additional attempt/benefit, which is otherwise not permissible under the scheme of Rules 2020.

Further, it has been observed that "…what is being claimed and prayed for under the guise of COVID 19 pandemic is nothing but a lame excuse in taking additional attempt to participate in the Civil Service Examination 2021 to be held in the future…".

"The data furnished to this Court by the Commission clearly indicate that various selections have been held by the Commission for the Central Services…, if this Court shows indulgence to few who had participated in the Examination 2020, it well set down a precedent and also have a cascading effect on examinations in other streams, for which we are dissuaded to exercise plenary powers under Article 142 of the Constitution."

The Judgement goes on to record that Rule 4 and Rule 6 of the Rules for Competitive Examination, 2020 prescribe the eligibility with regard to number of attempts and age respectively, with Rule 6 categorically stating that the age-limits prescribed can in no case be relaxed.

"So far as the candidates who appear in the general category and have crossed the age of 32 years, no discretion is left with the authority to grant any relaxation in upper age limit prescribed for the candidates appeared in the instant Examination 2020".

When the Centre decided to provide a one-time relaxation to candidates who were not age-barred, it had been opposed by the Petitioners on the ground that excluding those who were age-barred was discriminatory.

The Court has found in the submission of the Petitioners and noted that all attemptees, irrespective of the nature of attempts, must have faced the same consequences as a result of the pandemic and consequently, it would be advisable to avoid any concession that is not envisaged by the Rules.

"….we are also of the view that it is advisable to avoid this situation and any relaxation which is not permissible either in attempt or age under the scheme of Rules 2020 apart from being in contravention to the rules, it may be discriminatory and it is advisable not to exercise discretion in implementing what is being proposed by the 1st respondent in compliance of the order of this Court dated 30th September, 2020".

The Court observed that there was no substance in the submission of the Petitioners that the Respondent had exercised discretion as a matter of policy in earlier selections and that the Petitioners had a legitimate expectation that the Government would do the same in the instant matter in view of the unprecedented situation.

This was rejected "for the reason that the policy decisions which had been taken by the executive on earlier occasions of which a reference has been made always depend on the facts and circumstances at the given point of time and has to be tested independently in the circumstances in which it has been exercised by the competent authority or the 1st respondent as in the instant case".

The Court has held that while it is within the realm of the executive to take a policy decision based on the prevailing circumstances for better administration and in meeting out the exigencies but at the same time, it is not within the domain of the Courts to legislate. Therefore, in the given situation, no assistance can be claimed by the Petitioners in seeking mandamus to the Centre to come out with a policy granting relaxation.

'Life has to move on in COVID'

"..the Covid­19 pandemic has left its footprints for us to learn from the unprecedented situation, which everyone has come across and suddenly changed the lifestyle of every individual in the society, his way of working, from social security to individual human rights, from macro economy to household income and has made us more stronger to face, if any difficult situation arises in future and this is what by experience we learn. There is an old saying "there is good in every evil". Still life has to move on in all situations, and this is what this country has faced, but resiliently fought back this unprecedented situation and the economy and life of the common man is on the path towards normalcy in a short period of time than expected"

In light of the above, the Supreme Court has dismissed the writ petition.
Arguments by parties
At the final hearing, ASG SV Raju, appearing for the Centre had made submissions against the demand for extra chance and stated that the same was unwarranted as candidates were given sufficient time to prepare for the examination in 2020.

The hardships due to COVID19 affected all candidates uniformly and if extra chance is given to last-attempt candidates, other candidates will also start demanding the same, leading to an "endless cycle", the ASG had added.

Senior Advocates Shyam Divan, CU Singh and PS Narasimha, appearing for the Petitioners, had submitted that not granting the relaxation in the age-bar was arbitrary and unreasonable.

The Petitioners and the intervenors, while welcoming the offer of extra chance, opposed the Centre's decision to confine it only to candidates not hit by the age-bar.

This was in departure from the previous submission of the Central Government that the issue was under "active consideration" and that the government was not adopting an adversarial stance.
However, the Court orally suggested that an extra chance could be given, without necessarily increasing the age-limit.

On September 30, the Supreme Court had directed the Central Government and the Union Public Service Commission to consider granting an extra chance to candidates who otherwise have their last attempt in 2020, with corresponding extension of the upper age-limit.
That direction was given by a Bench led by Justice Khanwilkar in the case Vasireddy Govardhana Sai Prakash v UPSC while rejecting the petitioners' plea to postpone the UPSC exams scheduled in October 2020 in view of the COVID19 pandemic.

The Court directed the authorities to take a decision in that regard "expeditiously".
The relevant observations in the Court order are as follows:

The present petition had been filed as a sequel to the above proceedings seeking compensatory extra chance for civil service candidates.
Case Details