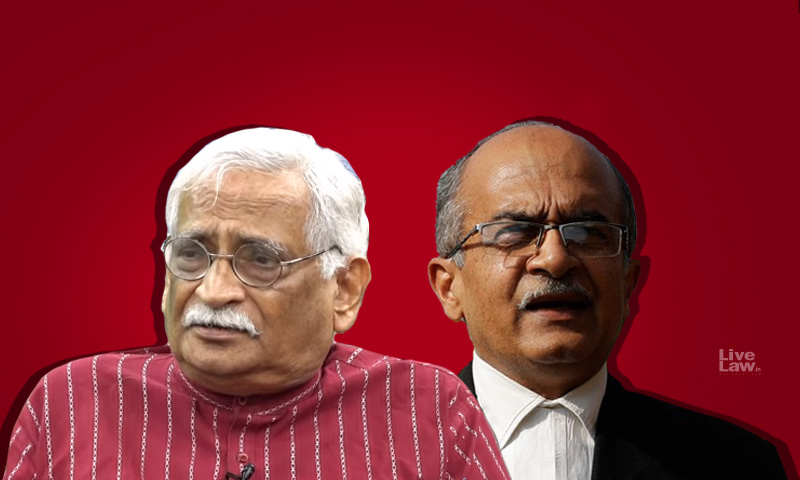 Senior Advocate Dr. Rajeev Dhavan, appearing for Advocate Prashant Bhushan in the contempt case, told the Supreme Court that he was not seeking mercy and was asking for "judicial statesmanship".

"We are not asking for mercy. We are asking for statesmanship from this Court", submitted Dr.Dhavan before a bench comprising Justices Arun Mishra, B R Gavai and Krishna Murari, which was hearing on the sentence to be passed in the contempt case.

Dhavan asserted that there was "no question" of Bhushan withdrawing his statements and that his affidavit cannon be excised from the records.

This was after Justice Arun Mishra, the presiding judge, expressed unhappiness over the fact that Bhushan filed a supplementary statement in the case to affirm his stand, instead of tendering "unconditional apology" within the time prescribed by the Court.

Justice Mishra, with reference to the Supplementary Statement submitted by Bhushan, stated, "We expected something better than this. What can be done if he thinks he has done no wrong."

Dr.Dhavan also criticized the order passed by the Court on August 20 giving Bhushan time till August 24 for apology. He said that the order gave the impression that the Court was coercing apology from him.

"The order which says it will only accept unconditional apology is an exercise of coercion", Dhavan submitted.

"An apology cannot be made to escape the clutches of law. An apology has to be sincere", Dhavan added explaining that Bhushan cannot be asked to apologize for expression of his bona fide beliefs.

When the Court asked Dr.Dhavan as to what could be a suitable punishment in the case, he replied that two kinds of punishments are imposed - one, to bar the lawyer from appearing in the Supreme Court for a certain period of time; two, to award him the punishment prescribed in the Contempt of Courts Act.

However, Dhavan cautioned that the effect of the punishment would be that Bhushan would be made a martyr and said that Bhushan did not want martyrdom.

"If Bhushan is punished, there will be one set of articles calling him a martyr and another set of articles saying that he was rightly punished. We all want this controversy to end. This can only end by judicial statesmanship."

Dhavan suggested that the Court could show "judicial statesmanship" and close the case by saying say "we have taken into account his statement. Though we disagree with many things he said, we caution him to be a little restrained in the manner in which he criticizes the court, and be sure on facts".

Dhavan : We are not asking for mercy. We are asking for statesmanship from this Court.#PrashantBhushan #contemptofcourt@pbhushan1
#SupremeCourt

During the hearing, Justice Arun Mishra also asked what was the problem in apologizing.

"Tell us what is wrong in using the word 'apology'? What is wrong in seeking apology? Will that be reflection of the guilty? Apology is a magical word, which can heal many things. I am talking generally and not about Prashant. You will go to the category of Mahatma Gandhi, if you apologise. Gandhiji used to do that. If you have hurt anybody, you must apply balm. One should not feel belittled by that", observed Justice Mishra before reserving Judgment.

#JusticeMishra : You will got to the category of Mahatma Gandhi if you apologize. Gandhiji used to do that. If you have hurt anybody, you must apply balm. One should not feel belittled by that.#PrashantBhushan #SupremeCourt

Complete updates from the hearing may be read here