[Orissa Lawyers' Strike] "We Have Little Doubt That The Conduct Of Lawyers Amount To Contempt";SC Summons HCBA President And State Bar Council Chairman 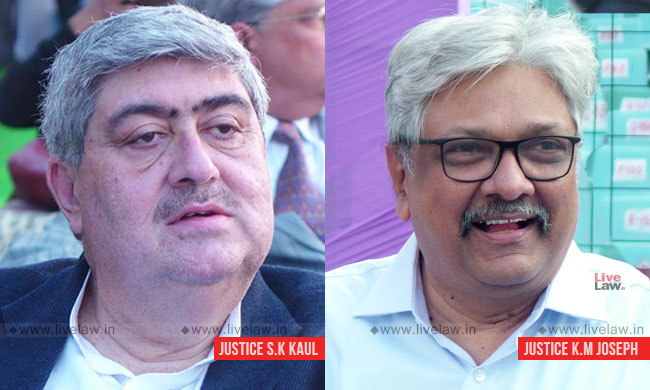 Stating that it had little doubt that the conduct of the lawyers at Orissa, who have been boycotting the Chief Justice's court, amounted to contempt, the Supreme Court today issued notices to the Chairman of the Orissa State Bar Council and the President of the Orissa High Court Bar Association, with directions to appear in person.

"We have a little doubt that conduct of the lawyers really falls within the domain of contempt in view of the law enunciated aforesaid. However, before proceeding to take action in that behalf, we deem it appropriate to simply issue notice to explain their conduct. We would specifically desire the Bar Council of India to inform us as to what steps they propose to take in respect of the conduct of the advocates who have violated the directions of this Court as enunciated in the aforesaid judgments.

The Chairman of the Orissa State Bar Council and President of the Orissa High Court Bar Association will also appear in person", the bench of Justices S K Kaul and K M Joseph said.

The order was passed in light of the law laid down in Krishnakant Tamrakar v. State of Madhya Pradesh, (2018) 17 SCC 27, wherein the Apex Court had held that "Since the strikes are in violation of law laid down by this Court, the same amount to contempt and at least the office-bearers of the associations who give call for the strikes cannot disown their liability for contempt."

The Supreme Court had taken note of this strike in a transfer petition filed by Petitioner, M/s PLR Projects Ltd., seeking transfer of its case out of Orrisa as the strike had rendered it impossible to present his urgent case which was listed before the Chief Justice of the high court.

In today's proceedings, the Supreme Court expressed its concern over the baseless strike initiated by the Advocates over Collegium's decisions and said "This can hardly be a ground for the lawyers to abstain from work". The Attorney General also cited the Law Commission's report in this behalf which revealed that a staggering number of working days were lost every year due to strike by Advocates, that too without any justifiable reasons.

On being informed that working of courts in Orissa had been brought to a stand-still, the Supreme Court had sought a report on measures for ensuring access to the court, from Advocate Misra in the last hearing.

In today's hearing, Advocate Misra submitted that all police assistance will be made available both for the High Court and for the district courts to ensure that egress and ingress in all court premises is available to willing advocates and litigants.

However remarking on functioning of courts without Advocates, the bench said,

"We will expect the courts to perform their task to the best of their abilities even if lawyers refuse to assist the courts. The litigants cannot be without access to justice and one wonders if an alternative would have to be explored in adjacent states for access to justice, if the advocates continue to be on strike."

Further, the bench issued notice to the Bar Council of India, requesting the Chairman to inform the court as to what steps they proposed to take in respect of the conduct of the advocates who had been violating the directions given in Krishnakant Tamrakar v. State of Madhya Pradesh, (2018) 17 SCC 27.

The court also warned the Co-ordination Committee of the Orissa HCBA for taking adverse action against Advocatei Sibo Sankar Misra. Allegedly, the Committee had resolved to suspend Misra from the Bar Association, had written a letter to the Bar Council of Orissa to initiate action against him and had sent a letter to the State Government to remove him from the panel of lawyers apart from initiating contempt proceedings against him.

"In doing so, we have not the least doubt that the said conduct of the lawyers amounts to interfering with the proceedings of this court. As to what consequences should follow for this would also be considered on the next date.

In the meantime, all of the aforesaid three decisions are stayed as also the local Bar Association and Bar Council are denuded of the authority to take any action in future also against the counsel in question," the court said.

Lastly addressing the grievance of the Petitioner about facilitation of his representation before the High Court, the court said,

"It will be open for the counsel to appear or the party going to appear in advance intimate the Registrar for making specific security arrangements for their presence and the police department of the State Government will also render full assistance in this behalf."

The HCBA had resorted to strike after a General Body Meeting of the Association convened on October 14, wherein the members had unanimously "condemned" the recent resolution and the attitude of the Supreme Court Collegium and the Orissa High Court Collegium. The resolution read,

"All the members of Orissa High Court Bar Association will abstain from Court work from 2.00 P.M. (after lunch) on 14.10.2019 to show their protest against the decision of the Hon'ble Supreme Court Collegium as well as High Court of Orissa Collegium."

The members had also resolved therein to enter into an "All Odisha strike".

Subsequently, the Full Court of the Orissa High Court took suo motu cognizance of the Resolution and issued contempt notice to the Association. However, the "unsavory environment created by the lawyers" hindered working of the courts so far that even the said suo motu proceedings had to be deferred.

The matter has now been posted for November 8.