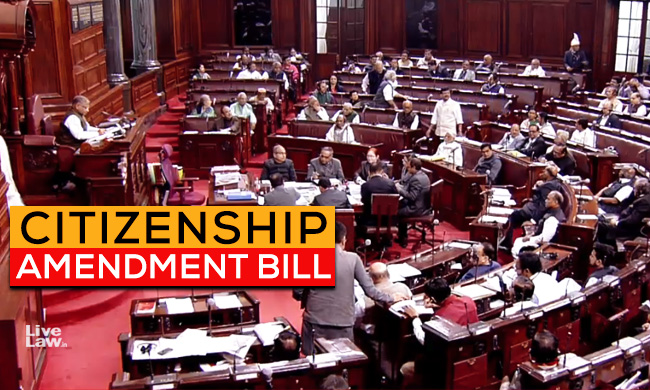 After a stormy debate which lasted over eight hours, the Rajya Sabha on Wednesday passed the Citizenship Amendment Bill 2019, which seeks to amend the Citizenship Act 1955.The Chairperson Venkaiah Naidu declared the bill cleared with 125 Ayes and 105 Noes.The Lok Sabha had cleared the Bill on Monday.The Bill seeks to relax conditions for acquiring...

The Chairperson Venkaiah Naidu declared the bill cleared with 125   Ayes and   105   Noes.

The Lok Sabha had cleared the Bill on Monday.

The Bill seeks to relax conditions for acquiring citizenship for non-Muslim migrants from Pakistan, Bangladesh and Afghanistan.

As per the Bill, Hindus, Sikhs, Buddhists, Parsis, Jains and Christians who migrated to India without travel documents from Pakistan, Bangladesh and Afghanistan on or before December 31, 2014 will not be regarded as illegal migrants. This is proposed to be done by inserting a new proviso to Section 2(1)(b) of the Citizenship Act 1955. The present Citizenship Act does not recognize the claims of illegal migrants for citizenship.

The Bill also proposes to relax the condition for acquisition of citizenship by naturalization for non-Muslim migrants from these countries. As per the existing law, a person should be a resident in India for the period of 12 months immediately preceding the date of application, and also should have been residing in India for 11 out of the 14 years preceding the said period of 12 months.

"The Constitutions of Pakistan, Afghanistan and Bangladesh provide for a specific state religion. As a result, many persons belonging to Hindu, Sikh, Buddhist, Jain, Parsi and Christian communities have faced persecution on grounds of religion in those countries. Some of them also have fears about such persecution in their day to day life where right to practice, profess and propagate their religion have been obstructed and restricted. Many such persons have fled to India to seek shelter and continued to stay in India even if their travel documents have expired or they have incomplete or no documents", the "Statement of Objects and Reasons" of the Bill said.

In his introductory remarks, Union Home Minister Amit Shah said that the Bill was based on a promise made by BJP in its election manifesto. Since the people have given BJP the majority, the Bill has got democratic support. The Minister reiterated that Muslims who are Indian citizens have nothing to worry about the Bill.

As the reason for exclusion of Rohingyas, Shah said that they do not come directly to India and that they go to Bangladesh and from there illegally infiltrate to India.

The bill is for addressing the special problem of minorities in Islamic states bordering India, and hence Sri Lankan Tamils are not brought under it, Shah said.

Opposing the Bill, Congress MP Anand Sharma said that the Bill was an assault on the very foundation of the Constitution of India.

"It hurts the soul of India. Its divisive, discriminatory. Its against the very preamble of the Constitution which speaks of equality and secularism".

"Two nation theory was not brought by Congress. It was first introduced by Hindu Mahasabha in 1935, under the leadership of Savarkar" : Anand Sharma#CAB2019 #RajyaSabha pic.twitter.com/tAfAsbjCWO

Seeking to refute the principal opposition party's claims, BJP MP J P Nadda referred to a statement made by former Prime Minister Manmohan Singh in the Rajya Sabha in 2003, whereby he had urged the then deputy PM L K Advani to liberalize grant of citizenship to religious minorities from Pakistan and Bangladesh, who had fled to India fearing persecution. Therefore, the opposition of Congress is hypocritical, said Nadda.

Trinamool Congress MP Derek O Brien equated the CAB with the Nazi citizenship laws brought in Germany in 1933-34. Referring to elections speeches and statements of the Prime Minister and Home Minister, Brien said that the CAB was closely linked with NRC project.

Indian citizenship is based on birth, descent and domicile. The CAB introduces an arbitrary concept of religion for grant of citizenship, said Chidambaram.

"This Bill is to further the 'Hindutva Agenda' of the government", he said.

The Bill violates Article 14 on the grounds of unequal treatment, illegal classification and manifest arbitrariness. The inclusions and exclusions in the Bill are against common sense. What are the reasons for excluding Sri Lankan Tamils and Bhutanese Christians, he asked. He also sought to know why only religious persecution is covered and not persecution on the grounds of politics and linguistic reasons.

Congress MP and Senior Advocate Kapil Sibal said that the Bill gave a legal colour to the 'two-nation' theory.  In response to Nadda's reference to Manmohan Singh's speech, Sibal said that the then Deputy Minister L K Advani had favoured grant of benefits to all refugees alike, without any discrimination on religious grounds.

"The bill is targeting a community without naming it. It is divisive and destabilize a polity. It weakens the foundation of our culture and ethos", he said.

PDP MP from Jammu and Kashmir Mir Mohammad Fayaz said that the Bill betrayed those Indian Muslims who preferred secular India over Pakistan.

Bhupendra Yadav from BJP said that CPI(M) in 2012 had sought grant of citizenship for religious minorities from Bangladesh. Congress had also made similar demands in the past, he added.

Union Law Minister Ravi Shankar Prasad, responding to queries raised by Chidambaram and Sibal, said that all bills tabled by the government are vetted by the Law Ministry.

"The Bill is constitutional, legal, is in the national interest and sub serves a larger humanitarian purpose", the Law Minister said.

Click here for comprehensive compilation of updates from the RS discussion