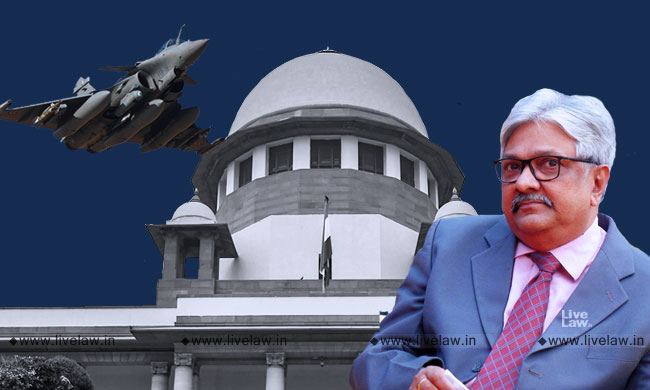 x
Petitioners have otherwise made out a case.

Justice K M Joseph observed in his separate judgment in the Rafale review that the main verdict will not stand in the way of CBI taking lawful action on the complaint raising corruption allegations on the Rafale deal, subject to getting approval under Section 17A of the Prevention of Corruption Act.He also observed that the review petitioners - Advocate Prashant Bhushan, former Union...

Justice K M Joseph observed in his separate judgment in the Rafale review that the main verdict will not stand in the way of CBI taking lawful action on the complaint raising corruption allegations on the Rafale deal, subject to getting approval under Section 17A of the Prevention of Corruption Act.

He also observed that the review petitioners - Advocate Prashant Bhushan, former Union Ministers Yashwant Sinha and Arun Shourie - have otherwise made out a case for acting on the complaint. However, no direction in that regard can be ordered by the Court. Two reasons were cited by Justice Joseph for this :

In this backdrop, Justice Joseph wondered whether it will be a "futile exercise" if the Court directs registration of FIR in view of the bar under Section 17A.

"Even proceeding on the basis that on petitioners complaint, an FIR must be registered as it purports to disclose cognizable offences and the Court must so direct, will it not be a futile exercise having regard to Section 17A. I am, therefore, of the view that though otherwise the petitioners in Writ Petition (Criminal) No. 298 of 2018 may have made out a case, having regard to the law actually laid down in Lalita Kumari (supra), and more importantly, Section 17A of the Prevention of Corruption Act, in a Review Petition, the petitioners cannot succeed", observed Justice Joseph.

However, he added that the verdict will not prevent the CBI from taking acting on the complaint in accordance with law.

"However, it is my view that the judgment sought to be reviewed, would not stand in the way of the first respondent in Writ Petition (Criminal) No. 298 of 2018 from taking action on Exhibit P1-complaint in accordance with law and subject to first respondent obtaining previous approval under Section 17A of the Prevention of Corruption Act".

Subject to this observation, Justice Joseph agreed with judgment written by Justice S K Kaul ( for himself and CJI Gogoi).

In the complaint filed by the petitioners before the CBI, they had requested the central agency to at least take the first step under Section 17A.  However, the fact that such a direction was not sought in the writ petition weighed with Justice Joseph.

He also noted that the petitioners have not challenged Section 17A.  The judgment held that even the lesser relief of ordering preliminary enquiry into the allegations cannot be ordered due to the obstacle created by Section 17A.  Because, Section 17A bars any inquiry or enquiry or investigation against a public servant without prior sanction from the government.

The petitioners had alleged corruption in fixing the price of 36 Rafale jets sought to be purchased from French company Dassault Aviation by Government of India and the selection of Anil Ambani-owned Reliance Aerostructure Limited as the Indian Offset Partner of the deal.

The December 14 judgment endorsed the decision making process of the deal and ruled out foul play in the pricing and selection of offset partners. The petitioners sought review of this judgment stating that they had only sought for registration of FIR in accordance with Lalitakumari dictum but the Court went on to examine the merits of the deal.

This argument did not appeal to CJI Googi and Justice Kaul, who observed that the petitioners cannot claim that they wanted a different adjudication process, after having invoked Article 32.  Justice Kaul termed that this was not a "fair submission" by the petitioners, as elaborate arguments on the aspects of 'decision making process', 'pricing' and 'offset partner' in relation to the deal were made by the parties.

Apparently striking a discordant note with this, Justice Joseph said

"It is not the fault of the party if the court chose not even to touch upon it".

Where a ground, which is based on principles laid down by a Constitution Bench of this Court, is not dealt with at all and it is complained of in review, it will rob the review jurisdiction of the very purpose it is intended to serve, if the complaint otherwise meritorious, is not heeded to (para 58)."

Observing that the December 14 judgment was inconsistent with Lalitakumari dictum , he added

"If the review petition, in other words, is rejected, in substance this Court would be upholding its judgment which when placed side-by-side with the pronouncement of the Constitution Bench in Lalita Kumari (supra), the two judgments cannot be squared."

The Court will be paying lip-service to the Lalitakumari dictum if the Court is to suggest that no FIR need be registered on the ground that the Court has approved of the deal under Article 32.

"If the complaint of the petitioner does make out the commission of the cognizable offence and FIR is to be registered and matter investigated, it will be no answer to suggest that this Court, has approved of the matter in judicial review proceedings under Article 32 of the Constitution and making it clear that entire exercise must be viewed from the prism of the limited judicial review the Court undertakes in such proceedings and this Court would end up paying less than lip service to the law laid down by the Constitution Bench in Lalita Kumari (para 62)", he said.

"it is one thing to say that with the limited judicial review, available to the Court, it did not find merit in the case of the petitioners regarding failure to follow the DPP, presence of over-pricing, violation of Offset Guidelines to favour a party, and another thing to direct action on a complaint in terms of the law laid down by this Court (para 67)

In this backdrop, Justice Joseph proceeded to examine the applicability of Lalitakumari dictum to the case, to arrive at the conclusion that relief could not be granted to the petitioners in view of the nature of relief claimed by them in the writ petition.