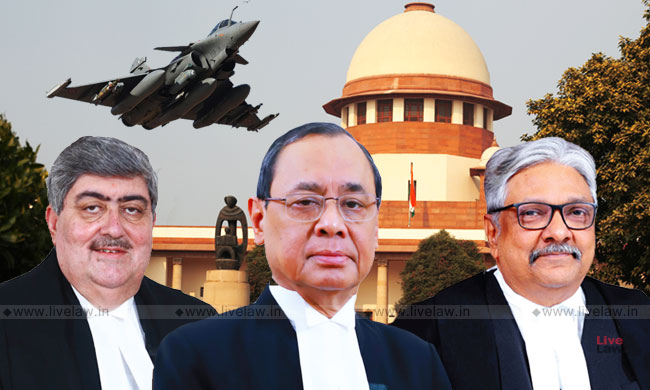 The Supreme Court on Thursday dismissed the review petitions filed against the December 14, 2018 judgment which declined to order probe into the corruption allegations regarding the deal to procure 36 Rafale jets by Indian Government form French company Dassault Aviation.

Justice Kaul, reading out the judgment for himself and CJI Gogoi, observed that the Court has elaborately discussed all the issues to find that there is no need to register FIR. Justice  K M Joseph wrote a separate but concurring judgment stating that scope of judicial review on such matters is very limited.  Thus, the review petitions were dismissed unanimously.

The Court allowed the application filed by the Central Government seeking correction of observations in the Rafale judgment regarding the CAG tabling a report on deal and PAC examining the same were wholly incorrect. The CAG report was tabled in Parliament only in February 2019, nearly two months after the judgment. The Centre moved a correction application, stating that the Court's findings were based on a grammatical misunderstanding of the submissions in the sealed cover note.

The Court however clarified that those observations were made only to complete the sequence of facts and that they did not form the "rationale of conclusion".

The petitioners' argument that the the Court reviewed the Rafale contract prematurely while deciding the prayer for registration of FIR was rejected. The Court said that this was not a "fair submission" by the petitioners, as elaborate arguments on the aspects of 'decision making process', 'pricing' and 'offset partner' in relation to the deal were made by the parties.

"The petitioners cannot be permitted to state that having so taken recourse to this remedy, they want an adjudication process which is really different from what is envisaged under the provisions invoked by them", the Court said.

The Court added that it cannot review the pricing of the deal.

"It is not the function of this Court to determine the prices nor for that matter can such aspects be dealt with on mere suspicion of persons who decide to approach the Court. The internal mechanism of such pricing would take care of the situation. On the perusal of documents we had found that one cannot compare apples and oranges. Thus, the pricing of the basic aircraft had to be compared which was competitively marginally lower. As to what should be loaded on the aircraft or not and what further pricing should be added has to be left to the best judgment of the competent authorities".

"All aspects were considered by the competent authority and the different views expressed considered and dealt with. It would well nigh become impossible for different opinions to be set out in the record if each opinion was to be construed as to be complied with before the contract was entered into. It would defeat the very purpose of debate in the decision making process".

The Court also refused to examine the subsequent materials brought on record by the petitioners regarding the decision making process in the deal.

"We decline to, once again, embark on an elaborate exercise of analyzing each clause, perusing what may be the different opinions, then taking a call whether a final decision should or should not have been taken in such technical matters", observed the Court in this context.

The Court further stated that nothing much can be made out of the wrongful reference to the Reliance company in the original judgment, as that observation was made in the generic sense.

On May 10, the last day before summer vacations, the bench comprising CJI Ranjan Gogoi, Justices S K Kaul and K M Joseph had reserved orders on the review petitions filed against the December 14 verdict which had declined to order probe into the corruption allegations in the Rafale deal.

The review petitions filed by advocate Prashant Bhushan and former Union Ministers Yashwant Sinha and Arun Shourie placed reliance on certain documents leaked by media in order to argue that the Government had suppressed material information from the Court regarding the deal to procure 36 fighter jets from French company Dassault. The Court also heard an application for initiating perjury proceedings against officials who had allegedly misled the Court.

On April 10, the bench of CJI Gogoi, Justices S K Kaul and K M Joseph had rejected Centre's preliminary objections against examining the documents leaked by newspapers such as 'The Hindu'. The Attorney General K K Venugopal had argue that the documents were obtained without authorization and hence violated Official Secrets Act. But the bench rejected the preliminary objection, on the reasoning that illegality in obtaining evidence did not affect its admissibility in court proceedings, if they are otherwise relevant.