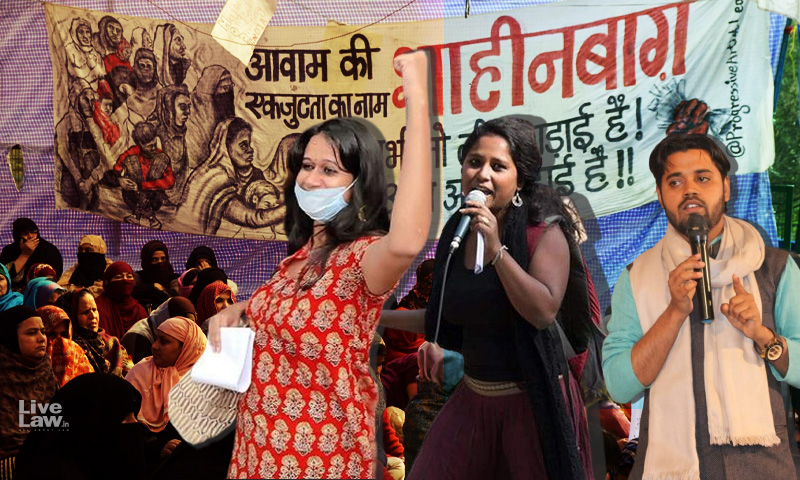 x
The Court noted that the CAA protests were not outlawed or banned.The protest was monitored by law enforcement agencies. The student organizations, which the accused were leading, are not banned organizations.

The Delhi High Court has found that offences under the Unlawful Activities Prevention Act (UAPA) are not made out prima facie against student leaders Asif Iqbal Tanha, Natasha Narwal and Devangana Kalita in the Delhi riots conspiracy case.The Delhi Police had filed chargesheet against them alleging that the protests organized by them against the Citizenship Amendment Act from December 2019...

The Delhi High Court has found that offences under the Unlawful Activities Prevention Act (UAPA) are not made out prima facie against student leaders Asif Iqbal Tanha, Natasha Narwal and Devangana Kalita in the Delhi riots conspiracy case.

However, a High Court bench comprising Justices Siddharth Mridul and Anup Jairam Bhambhani, after a preliminary analysis of the chargesheet, observed that the allegations do not prima facie constitute the alleged UAPA offences relating to terrorist activities(Sections 15,17 and 18).

Right to protest not a terrorist act under UAPA

In the three separate orders delivered allowing the bail applications of Tanha, Narwal and Kalita, the High Court has undertaken a factual examination of the allegations to ascertain if prima facie case is made out against them for the purposes of Section 43D(5) of UAPA. Also, there are important and significant observations made by the High Court relating to the fundamental right to protest and the frivolous use of UAPA to stifle citizens' dissent.

Reiterating that right to peaceful protest is a constitutional right flowing from Article 19(1)(a) of the Constitution, the High Court said :

"...the right to protest is not outlawed and cannot be termed as a 'terrorist act' within the meaning of the UAPA, unless of course the ingredients of the offences under sections 15, 17 and/or 18 of the UAPA are clearly discernible from the factual allegations contained in charge-sheet and the material filed therewith"

"The right to protest is not outlawed and cannot be termed as a 'terrorist act' within the meaning of the UAPA" - Delhi High Court in #DelhiRiots case against #AsifIqbalTanha, #DevanganaKalita and #NatashaNarwal.

The Court noted that the allegations in the chargesheet highlighted that the accused were part of mobilizing people and organizing chakka-jam(road blocks) as forms of protests against the CAA.

As regards Tanha, the Court noted that the only specific and overt act alleged against him is that he had handed over a mobile SIM card, which was given to him by someone else, to another alleged conspirator, who in turn used the SIM card to form a WhatsApp group to send messages regarding CAA protest.

Furthhemore, the Court noted, there is no allegation whatsoever that the arms, ammunition and other articles, that were supposedly to be used as weapons, were recovered from or at the instance of the appellant.

The Court observed that the prosecution allegations are not specific factual allegations and are based on certain inferences. It said that mere use of "alarming and hyperbolic verbiage" in chargesheet will not convince the court.

"It has been a recurrent theme, repeatedly urged by the State, that what was contemplated and in fact brought to fruition was not a typical protest but an aggravated protest which was intended to disrupt the life of the community in Delhi. We find ourselves unpersuaded and unconvinced with this submission since we find it is not founded on any specific factual allegation and we are of the view that the mere use of alarming and hyperbolic verbiage in the subject charge-sheet will not convince us otherwise. In fact, upon a closer scrutiny of the submissions made on behalf of the State, we find that the submissions are based upon inferences drawn by the prosecuting agency and not upon factual allegations"

The Court further noted that the CAA protests were not outlawed or banned.The protest was monitored by law enforcement agencies. The student organizations, which the accused were leading, are not banned organizations.

In the orders passed in the cases of Kalita and Narwal, the bench observed the allegations only show that they only organized protests as part of women organizations. Even against them, there is no specific or particularised allegation which comes under the ambit of Sections 15 and 17 of UAPA.

"Allegations relating to inflammatory speeches, organising of chakka jaam, instigating women to protest and to stock-pile various articles and other similar allegations, in our view, at worst, are evidence that the appellant participated in organising protests, but we can discern no specific or particularised allegation, much less any material to bear-out the allegation, that the appellant incited violence, what to talk of committing a terrorist act or a conspiracy or act preparatory to the commission of a terrorist act as understood in the UAPA"

Even if it is assumed that the protests have crossed the line of peaceful protests permissible under Constitution, that will not amount to a 'terrorist act' under the UAPA.

"The making of inflammatory speeches, organising chakkajams, and such like actions are not uncommon when there is widespread opposition to Governmental or Parliamentary actions. Even if we assume for the sake of argument, without expressing any view thereon, that in the present case inflammatory speeches, chakkajams, instigation of women protesters and other actions, to which the appellant is alleged to have been party, crossed the line of peaceful protests permissible under our Constitutional guarantee, that however would yet not amount to commission of a 'terrorist act' or a 'conspiracy' or an 'act preparatory' to the commission of a terrorist act as understood under the UAPA"

The police argued that even acts which are "likely to strike" terror come under the ambit of Section 15 UAPA.

In this regard, the Court said :

"Having given our anxious consideration to this aspect of 'likelihood' of threat and terror, we are of the view that the foundations of our nation stand on surer footing than to be likely to be shaken by a protest, however vicious, organised by a tribe of college students or other persons, operating as a coordination committee from the confines of a University situate in the heart of Delhi"

The Court said that the chargesheet, which employed "superfluous verbiage", "hyberbole", "stretched inferences", "grandiloquence", did not reveal any prima facie offence.

"We are afraid, that in our opinion, shorn-off the superfluous verbiage, hyperbole and the stretched inferences drawn from them by the prosecuting agency, the factual allegations made against the appellant do not prima facie disclose the commission of any offence under sections 15, 17 and/or 18 of the UAPA"

Court makes observations against frivolous use of UAPA, 'terrorism' offence

The Court cautioned the police against the frivolous use of the offences under UAPA against acts which are otherwise covered under ordinary penal laws.

"Where the court finds that an act or omission is adequately addressed and dealt with by the ordinary penal law of the land, the court must not countenance a State agency 'crying wolf'"

Since 'terrorist activity' is a vague term, its meaning must be construed narrowly. UAPA must be invoked only with respect to acts having a bearing on the 'defence of India' and not against ordinary acts which can be dealt under normal penal laws(See paragraph 57 of order in Tanha case).

"It was neither the intent nor purport of enacting UAPA that other offences of the usual and ordinary kind, however grave, egregious or heinous in their nature and extent, should also be covered by UAPA, since such conventional matters would have fallen within Entry 1 of List-II (State List) and/or Entry 1 of List-III (Concurrent List) of the Seventh Schedule to our Constitution.

In order to lean in favour of constitutionality of the provisions of section 15, 17 and 18 of the UAPA, as we must, it must be taken that the Parliament acted within the realm of its legislative competence and that UAPA came to be enacted and amended in 2004 and 2008 to address issues relating to the 'Defence of India'"

The Court added a word of caution by saying :

"In Its Anxiety To Suppress Dissent, In The Mind Of State, Line Between Right To Protest And Terrorist Activity Seems To Be Getting Blurred": Delhi HC In Natasha Narwal's Bail Order

Click here to read/download the judgment in Devangana Kalita case

Click here to read/download the judgment in Natasha Narwal case