Breaking: SC Directs Political Parties To Submits The Details Of All Donations Received Through Electoral Bonds To Election Commission By May 30 [Read Order] 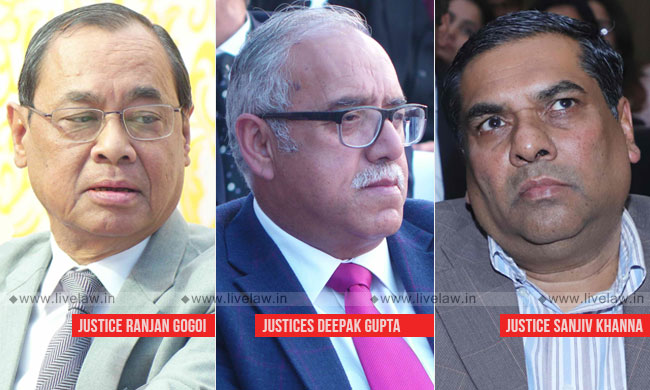 Noting that the issue of Electoral Bonds (EB) is a weighty one which is significantly apposite to the sanctity of the election process, the Supreme Court on Friday declined to stay the EB Scheme ahead of the 2019 General Elections. Further observing that the question could not be determined on the basis of a short hearing and that any interim orders of the court must not have the effect...

Noting that the issue of Electoral Bonds (EB) is a weighty one which is significantly apposite to the sanctity of the election process, the Supreme Court on Friday declined to stay the EB Scheme ahead of the 2019 General Elections.

Further observing that the question could not be determined on the basis of a short hearing and that any interim orders of the court must not have the effect of tilting the balance in the favour of any political party, the bench headed by Chief Justice Ranjan Gogoi directed all parties to furnish by May 30 information as to the donations received by way of EBs including the identity of the donors, amounts received, details of payments, bank accounts etc to the Election Commission in sealed covers.

The bench also required the Finance Ministry to modify its recent notification allowing the purchase of EBs for an additional five day over and above the stipulated 10 days in January, 10 in April and the extra 30 days permitted in the election year.

The Bench reserved the interim order on Thursday on petitions filed by NGOs Common Cause and Association for Democratic Reforms(ADR) and CPI (M) challenging it.

Electoral bonds were introduced by amendments made through the Finance Act 2017 to the Reserve Bank of India Act 1934, Representation of Peoples Act 1951, Income Tax Act 1961 and Companies Act. On January 2, 2018, the Centre notified the scheme for electoral bonds, which are in the nature of bearer instruments like a Promissory Note capable of being purchased by an Indian citizen or a body incorporated in India. The identity of the donor will be known only to the bank, which will be kept anonymous.

The scheme has been challenged in petitions filed by political party Communist Party of India(Marxist), and NGOs Common Cause and Association for Democratic Reforms(ADR),which term it "an obscure funding system which is unchecked by any authority". The petitioners voiced the apprehension that the amendments to Companies Act 2013 will lead to "private corporate interests taking precedence over the needs and rights of the people of the State in policy considerations".

The petitioners had sought for immediate stay of the scheme, stating that 95% of the electoral bonds sold so far have been in favour of one political party, that is the current ruling party. They also stated that most of the bonds that have been purchased since 2018 have been of the denominations of 10 lakh and 1 crores, indicating that it is not common citizens but corporates that have been purchasing these bonds while enjoying complete anonymity accorded by the scheme.

The Election Commission of India has filed counter-affidavit stating that the scheme was a "retrograde step as far as transparency in political funding is concerned". The ECI said that it had expressed concerns way back in May 2017 itself, immediately after the passage of the Finance Act 2017, which had brought in the crucial legislative amendments for laying the foundation for the scheme.

By virtue of the amendment made to Section 29C of the Representation of Peoples Act 1951(RPA), political parties need not report to ECI the donations received through electoral bonds.The ECI said that if contributions are not reported, it will not be possible to ascertain if political parties have taken donations from government companies and foreign sources, which is prohibited under Section 29B of RPA.

"This opens up the possibility of shell companies being set up for the sole purpose of making donations to political parties, with no other business consequence of having disbursable profits", said the ECI letter.

The Attorney General defended the scheme by saying that it will help eradication of black money.Electoral Bonds will ensure that funding will come only through the banking channel, and will thus check the use of black money.
The donor's identity is kept anonymous to prevent them being victimized, in case they turn out to have supported the losing party, advanced the AG.

"The actual objective is to remove any impediment to payments which is posed by disclosing their source and to which political party they are tendered. If you back the wrong horse, then tomorrow an industrialist who is bidding for a dam will get victimized if the opposite party came to power", said the AG.

He drew the bench's attention to a report on the black money influx during elections between 2011 and 2014, showing that the accurate estimates of campaign spending are not found, that the average amount received at the national and state levels is only half of the reported spending, and that black money accounts for a staggering 46 % of the total expenditure for the MLAs and 43% for the MPs.

The AG also urged that interests of transparency does not mean that the donors' identity should be revealed.

"Transparency cannot be applied without appreciating the problem faced by the legislature, which believed this to be the best way of solving it. The voter has the right to know what? They already know every single aspect about the candidate! Why are they concerned about the source of money of the political party? Puttuswamy speaks of right to privacy in every respect", pleaded Mr. Venugopal.