'State Should Not Be Impulsive Like An Ordinary Citizen In Defamation Matters And Invoke Sec 199(2) CrPC To Throttle Democracy' :Madras HC Quashes Cases Against N Ram & Ors [Read Judgment] 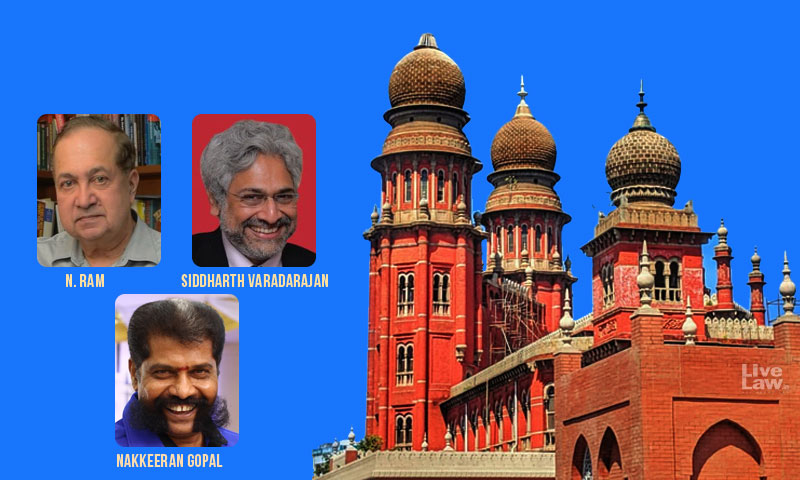 In a significant judgment underscoring the importance of press freedom, the Madras High Court on Wednesday quashed the criminal complaints filed against a group of editors and journalists such as N Ram, Editor-in-Chief of The Hindu, Siddharth Varadarajan, Nakkeeran Gopal etc.The complaints were lodged in 2012 alleging "criminal defamation against State' over few reports against J Jayalalitha,...

In a significant judgment underscoring the importance of press freedom, the Madras High Court on Wednesday quashed the criminal complaints filed against a group of editors and journalists such as N Ram, Editor-in-Chief of The Hindu, Siddharth Varadarajan, Nakkeeran Gopal etc.

The complaints were lodged in 2012 alleging "criminal defamation against State' over few reports against J Jayalalitha, the then Chief Minister of Tamil Nadu.

Alleging that the reports amounted to defamation of a state functionary, criminal complaints were filed by the Public Prosecutor before the Sessions Court under Section 199(2) of the Code of Criminal Procedure.

Section 199(2) CrPC lays down a special procedure for offences of defamation against state/constitutional functionaries under Section 499/500 of the Indian Penal Code. The complaint is filed by the Public Prosecutor on behalf of the State before the Sessions Court (normal defamation cases are filed before the Magistrate's Court)

The writ petitions filed in the HC challenged the constitutional validity of the government orders granting sanction to the Public Prosecutor to file complaints under Section 199(2) CrPC in respect of the reports.

The bench of Justice Abdul Quddhose noted that there is a higher threshold for the State to initiate criminal defamation against citizens, when compared to ordinary cases of defamation inter-se private parties.

The Court added that the State should maintain higher tolerance with respect to criticism, and cannot be "impulsive" to launch prosecution.

"An individual or a public servant/constitutional functionary can be impulsive but not the State which will have to show utmost restraint and maturity in filing criminal defamation cases. If the State becomes an impulsive prosecutor in criminal defamation matters that too in an era of social media where there are scores of abusive contents made against public figures, the Sessions Court will get clogged with innumerable matters which are sometimes vindictive in nature only to settle scores with opposition political parties"

Likening the State to a "parent", the Court observed :

"State is like a parent for all citizens in so far as Defamation law is concerned. It is normal for some parents to face vituperative insults from their children. Despite those insults, parents don't disown their children quite easily. They always have the hope that their children will mend themselves in the near future. Only in rarest of rare cases when the character and behaviour of their children is irretrievably broken down and irreconcilable, the parents disown them.

The attitude of the State with regard to defamation must also be the same as their tolerance level towards its citizens in so far as defamation is concerned must be akin to that of parents. When the state is having other avenues under law to make the offender realise the mistake if any, the criminal defamation law under section 499 and 500 IPC should be sparingly used by the State".

Notably, the judgment referred to the recent speeches delivered by Justice Deepak Gupta, former SC judge and Justice D Y Chandrachud, SC judge, wherein they highlighted the importance of dissent in democracy and criticized the growing tendency to use criminal law to silence dissenting voices.

The Court referred to the principles laid down by the apex court in the case Dr Subramanian Swamy vs Union of India regarding the use of criminal defamation. Though the petitioners had also challenged the constitutional validity of Section 499/500 of the Indian Penal Code, the HC did not deal with that aspect, as its validity was upheld by the SC in 2016 in the Subramanian Swamy case.

Two weeks ago, the Madras HC had quashed criminal defamation proceedings against a reporter and editor of Economic Times holding that mere inaccuracies in reporting will not amount to defamation, in the absence of actual malic.

Level of Scrutiny by Sessions Court under Section 199(2) higher

After examining the statistics, the court noted that from the year 2012 to 2020, a slew of cases filed totally numbering 226 cases are pending on the file of various Sessions courts till date.

In this backdrop, the Court reminded the Sessions Judges that they have to exercise higher level of scrutiny with respect to criminal defamation complaints by the State.

The Court said that Public Prosecutor should not act like a "post office" to merely file complaints at the directives of the State, and should independently apply mind on the allegations before filing the complaint.

The Court noted that in all the cases, the core ingredient required for prosecution through a public prosecutor under section 199(2) Cr.P.C. namely "Defamation of the State" is missing.

In all the matters, while granting sanction for prosecution to a public prosecutor, the respective sanction orders are totally silent as to whether the state has been defamed on account of the alleged defamation of the public servant/constitutional functionary while discharging his/her public functions, said the Court.

"in all the cases which are the subject matter of consideration by this court, the State has sanctioned prosecution in a mechanical fashion by total non application of mind as the fundamental requirement for prosecution under section 199(2) Cr.P.C. namely "Defamation of the State" does not find a place in all the sanction orders. The public prosecutor as well as the Sessions Judge in cases where cognizance has already been taken by the Sessions Court have also not applied their mind independently as the core essence of prosecution under section 199 (2) Cr.P.C. namely "Defamation of the state" has not been satisfied as seen from the sanction orders. On this score alone, all the Government Orders and the consequential complaints for criminal defamation under section 199(2) Cr.P.C. will have to fail"

The Court also made few parting remarks on the importance of the media to exercise self-regulation.

"Our nation has always respected the role of the media and has highest regard for their independent and truthful reporting. But of late for quite number of years, there seems to be some decay happening in every sphere of democracy including the Media. If the rottenness is not removed sooner than later, it will spread like fire causing great peril to our robust Democracy"

"The newspaper is a great power, but just as an unchained torrent of water submerges the whole countryside and devastates crops, even so an uncontrolled pen serves but to destroy. If the control is from without, it proves more poisonous than want of control. It can be profitable only when exercised from within"