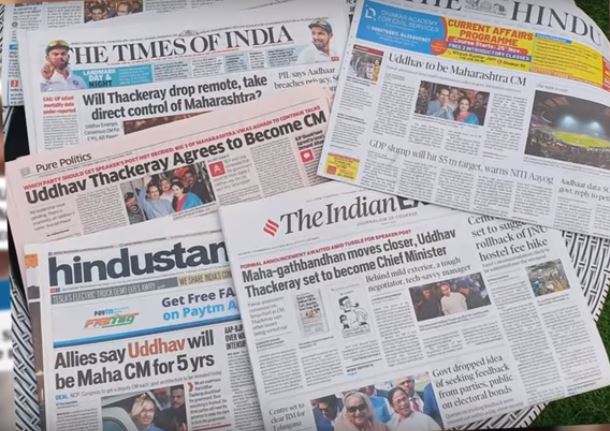 "There is something called ethical imperative. It envisions that inherent powers go with implicit duties. Courts often nudge and remind the executive that possession of power is coupled with a duty to exercise the same. Judicial power can be no different. When freedom of press which is a fundamental right is at stake, higher judiciary is obliged to exercise not only its inherent power...

"There is something called ethical imperative. It envisions that inherent powers go with implicit duties. Courts often nudge and remind the executive that possession of power is coupled with a duty to exercise the same. Judicial power can be no different. When freedom of press which is a fundamental right is at stake, higher judiciary is obliged to exercise not only its inherent power but also exert itself a bit. An unused power is a useless tinsel. There is no point in merely saying that press is the foundation of democracy."

The Madras High Court on Wednesday quashed the criminal defamation proceedings instituted against the Journalist Sandhya Ravishankar and her husband, also the Editor and Grievances Redressal Officer of the Economic Times, in connection to an article about illegal beach sand mining of atomic minerals along the southern coastline of Tamil Nadu, published in the 2015 issue of the ET Magazine.

While doing so, the bench of Justice GR Swaminathan made significant observations with regards the role of higher judiciary in "safeguarding the freedom of press".

"I am clearly of the view that there is no point in merely singing paeans to freedom of press, if one cannot go to its rescue when the said right is faced with a serious threat," he said while holding that the very institution of the impugned complaint is an abuse of the process of court.

The court remarked that when freedom of press which is a fundamental right is at stake, higher judiciary is "obliged" to exercise its inherent powers.

Relying on a Supreme Court ruling in State of Madras v. VG Rao, AIR 1952 SC 196, the bench held that courts play the role of "sentinel on the qui vive" to protect the Constitutional rights of citizens.

"The sentinel must ever be alert to danger and charge forth when required. The Court can never desert its duty when it comes to protection of fundamental rights. Those observations will apply to the entire higher judiciary," Justice Swaminathan remarked.

The Petitioners, Sandhya Ravishankar and her husband had approached the High Court seeking quashing of the criminal defamation case filed against them by a sand mining corporation and the consequent summons issued by the Judicial Magistrate,.

It was pointed out that the articles in question were published after the Madras High Court issued notice on PIL filed over illegal beach sand mining.

The complainant corporation had alleged that the Petitioners herein, by way of the impugned article, made false statements and undermined their reputation in the public eye and caused them irreparable harm.

They had also alleged that Ravishankar's husband had earlier applied for employment in a news channel in which the Complainant had substantial stakes, and now, she wrote the article out of hatred and malice and to settle scores with the complainant, for having declined to employ her husband.

Article based on a PIL

The Court noted that the contents of the impugned article were inspired from a PIL filed before the High Court, alleging illicit mining of beach sand minerals. The same was published only after notices were issued on the PIL, including to the complainant-Respondent.

Further it observed that even though the original Petitioner in the case was relieved from the proceedings for lacking in bonafides but, "the PIL did not get terminated or closed". Rather, the court took cognizance of the allegation that illicit sand mining was still going on.

In face of this factual matrix, the High Court remarked,

The court upheld the Petitioners' argument that their case fell within the third exception to Section 499 of IPC, on criminal defamation.

As per the third exception, criminal defamation proceedings would not be attracted if a publication is carried out in good faith and on a public question.

"The article penned by the third petitioner raised an issue in which the people at large definitely have an interest. The article has been published only in the wake of the notice issued by the Hon'ble First Bench of the Madras High Court. When the Hon'ble First Bench thought it fit to issue notice based on the allegations made by a litigant and when it raised a public question, the media is certainly entitled to carry a story on it. This is something that would on the very face of it fall within Exception No.3 to Section 499 IPC."

In light of an American ruling in New York Times vs. Sullivan 376 U.S 254, the bench held that "minor errors" in reporting do not call for initiation of criminal proceedings against the media.

In the said case, the US Supreme Court had held that "Erroneous statements" were "inevitable in free debate" and therefore, the very existence of free debate required the protection of such statements, the bench quoted from Book titled "Offend, Shock or Disturb", authored by Gautam Bhatia.

The above decision of was later cited with approval by the Supreme Court in R. Rajagopal v. State of Tamil Nadu (1994) 6 SCC 632, whereby it was held that

"Where the publication is based upon the facts and statements which are not true, unless the official establishes that the publication was made (by the defendant) with reckless disregard for truth. In such a case, it would be enough for the defendant (member of the press or media) to prove he acted after a reasonable verification of the facts; it is not necessary for him to prove that what he has written is true…"

"There can always be a margin of error. The permissible width of the margin will depend on the facts and circumstances of each case. The media can avail this defence whether the complainant is a public official or a private entity. Mere inaccuracies in reporting cannot justify initiation of prosecution."

In this backdrop, having found no material to substantiate the allegations and for the reason that a PIL on the subject matter was pending before a division bench of the High Court, the court conclude that it was best suited to quash the criminal complaint.

In doing so the he also highlighted the crucial role played by the judiciary in upholding the independence of the fourth pillar of democracy.

"If a summary examination of the materials produced by the accused can bring their case within one of the Exceptions, I can give relief to the petitioners here itself instead of making them undergo the ordeal of trial. Such an activist role will have to be played by the higher judiciary because it is a matter of record that criminal defamation proceedings have become a tool of intimidation and before corporate bodies and powerful politicians whose pockets are tunnel deep and whose hands are long even media houses having good resources have capitulated," he held.

Maneuvering its "activist role", the bench went on to recognize the capacity of a wife "to act independently and make her own free choice".

Condemning the allegations that Ravishankar had penned the article at the behest of her husband, the court observed that the same "undermines the agency" of a woman.

"If I accept the contention of the complainant's counsel, that would undermine the agency of the woman concerned. This concept of agency has considerable philosophical import and was evolved by the feminists during the last century. The complainant wants me to assume that the third petitioner lacks personal autonomy. The third petitioner definitely has the capacity to act independently and make her own free choice. I cannot assume that the third petitioner was a pawn or tool at the hands of her husband. Her innate dignity can be upheld only by deleting the fourth petitioner from the array of accused," he held.

The observation was made in the backdrop of a finding that the complainant had not placed any material before the Court to show that the husband was a complicit in the writing of the impugned article.

The court also pointed out various procedural irregularities inherent in the criminal proceedings pending before the Trial Court.

It noted that the Petitioner-husband had not been named and was addressed on the basis of the title held by him at his company.

In this case however, the bench noted,

"the trial magistrate appears to have mechanically taken cognizance of the offences even without noting that the A1 and A2 have not been named in person at all. That apart, there is absolutely no allegation whatsoever against the first petitioner. Merely because he has not redressed the grievance projected by the complainant, he cannot be accused of having committed the offence of defamation. Therefore, I have no hesitation to come to the conclusion that the impugned proceedings deserve to be quashed as regards the petitioners 1 and 2."

Further on the aspect of territorial jurisdiction the bench held,

"A mere look at the cause title would have revealed that the accused are not residing within the jurisdictional limits of Judicial Magistrate No. I, Tirunelveli. But without holding any enquiry, summons were issued. The learned trial magistrate has not taken note of the mandate set out in Section 202 of Cr.PC. Thus, there has been no application of mind while taking cognizance of the offences."

in a concluding remark the court said,

"The petitioners 2 and 3 cannot be said to have defamed the complainant by publishing the article in question. The very institution of the impugned complaint is an abuse of the process of court. Quashing the same alone would secure the ends of justice. I have already held that there is absolutely no material whatsoever against the petitioners 1 and 4. The impugned proceedings are accordingly quashed and this criminal original petition stands allowed. Connected miscellaneous petitions are closed."