BREAKING| SEDITION- Supreme Court Agrees To Centre's Proposal To Defer Hearing Till It Reconsiders Section 124A, Seeks Response On Pending And Future Cases 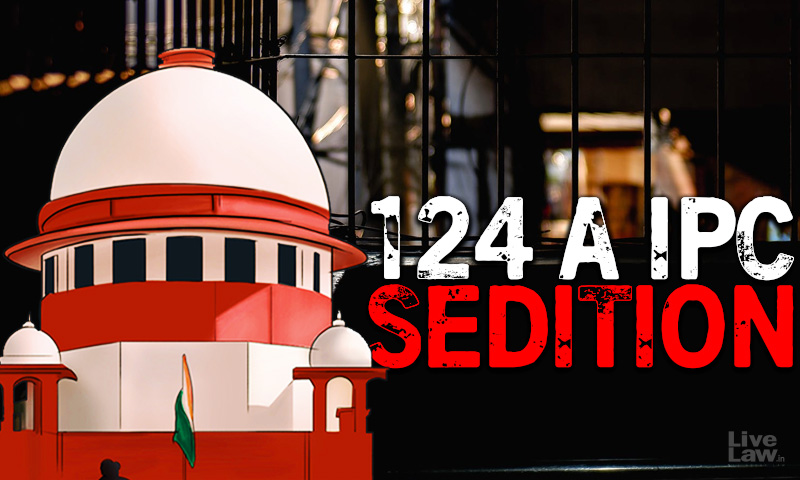 The Supreme Court on Tuesday has agreed with the Centre's suggestion to defer the hearing of petitions challenging the constitutional validity of the offence of sedition under Section 124A of the Indian Penal Code till it reconsiders the provision. The Court has sought the response of the Centre on the status of pending and future cases till the Govt. takes a decision.A special...

The Supreme Court on Tuesday has agreed with the Centre's suggestion to defer the hearing of petitions challenging the constitutional validity of the offence of sedition under Section 124A of the Indian Penal Code till it reconsiders the provision.

The Court has sought the response of the Centre on the status of pending and future cases till the Govt. takes a decision.

A special bench comprising the Chief Justice of India NV Ramana, Justice Surya Kant and Justice Hima Kohli was considering the preliminary issue as to whether a reference to a larger bench is required, as a 5-judge bench in Kedar Nath Singh vs State of Bihar had retained the section after reading it down.

"Mr.Mehta, we are making it very clear. We want instructions. We will give you time till tomorrow. Our specific queries are, about the pending cases and how government will take care of future cases. These are the two issues on which we want the government to respond," the Bench orally remarked.

The main contention raised by the petitioner was if an adjournment was indeed granted, how the interests of people who are already booked under Section 124A can be protected and if future cases can be kept abeyance till reconsideration is over. The Solicitor General has been asked to get instructions on this.

This matter will be taken up tomorrow.

When the bench assembled today, Solicitor General of India Tushar Mehta submitted that the Centre had filed a reply informing the court that it has chosen to reexamine and reconsider Section 124A of the IPC.

In this affidavit, the Union had prayed that the Court may not invest its tie in examining the validity of the impugned Section once again and be pleased to await the exercise of consideration to be undertaken by the Government before an appropriate forum where such consideration is constitutionally permitted.

Solicitor General argued that this reconsideration will be at the level of the executive because the sovereignty and integrity of the nation are involved in the case. Nobody can say penal offence should not be there, he added while praying that the hearing may be deferred.

Senior Advocate Kapil Sibal retorted that the exercise of this Court cannot be stopped merely because the legislature will take time to reconsider the issue for another 6 months or even a year and thereby took strong objection to the Centre's affidavit. He asserted that it was for the judiciary to examine the constitutionality of law.

The Court found force in this submission and stated that the notice in this case was issued months ago and even when the case was taken up for the last hearing the Centre had taken the stand that there was no need to reconsider the law.  CJI asked the Centre to give an estimate of how long this exercise of reconsideration would take.

The SG responded that the impugned provision has been in existence for over 100 years while pointing out that as soon as notice was issued, cognizance was taken in the matter. Regarding the time, he stated that he could not give an accurate reply. It was submitted that the process had been initiated already and that from the tenor and spirit of the affidavit, it was evident that there was an application of mind involved in the process.

The bench opined that when the State says they want to do something, the court should not be unreasonable and hinted that it will decide on how much time can be granted.

However, Sibal objected to this pointing out that in the meantime people were getting arrested.

Meanwhile, Senior Advocate Gopal Shankaranarayanan submitted that the affidavit of the Centre cannot speak for the Parliament. He added that there is another disturbing aspect, pointing out that there is a pattern followed by the Centre in such sensational cases by taking the examples of the Right to Privacy and marital rape cases.

The CJI noted that in the affidavit, it was pointed out that the Prime Minister has been cognizant of the issues relating to civil liberties and that he believes at a time of the 75th year of independence, the nation wants to shed colonial baggage including outdated colonial laws. CJI Ramana added that in this background, the court should not appear to be unreasonable.

He admitted that there are several concerns regarding the pending cases and the misuse of the provision. Turning to the Solicitor General, the CJI recollected that the Attorney General had previously submitted the recent issue of a sedition case being booked even for chanting Hanuman Chalisa and asked how these issues could be protected.

To this, the SG submitted that the filing of FIRs and investigation were done by the State Governments and not the Centre. Whenever there is a misuse, there are constitutional safeguards, he said.

The SG said that he will get instructions on this.

Justice Kant then intervened and highlighted that the Centre had said that an "appropriate forum" will reexamine. The Court asked why the Centre itself was not engaging in this exercise despite its Ministry issuing a direction to the States that matters under Section 124A IPC should be kept in abeyance till the matter is under reconsideration.

Justice Hima Kohli also agreed with this and asked why the Centre could not instruct the States to not proceed with the matter till the issue is under reconsideration.

The SG submitted that he will take instructions on this point as well and thereby discuss if such guidelines could be made. SG Tushar Mehta also recalled that in the Vinod Dua case, this Court did not go into a prayer for guidelines saying it was a matter for the legislature.

Justice Surya Kant pointed out that this was necessary in this case since if something serious happens in the meantime, there are other penal laws to take care of the same. It is not like enforcement agencies are helpless, the Judge remarked.

Senior Counsel Sibal chimed in and submitted that the SG had mentioned that Section 124 A mentions sovereignty and integrity of India, but that this was not true. He said that the provision does not mention these words and that it was included in Article 19(2). He also urged that no arrests should take place under Section 124A till this reconsideration was over.

After discussion, Justice Kant opined that in Kedar Nath, the provision was melted down. The Judge underscored that the local police was operating at the ground level and that in the absence of a direction from the Centre that the impugned provision was under reconsideration, cases may continue to be registered.

When the SG started reading out his written submissions to establish that Kedar Nath has struck a balance to ensure that 124A is not misused, Sibal argued that Kedar Nath was based on Federal Court judgments, in the pre-constitution era where there was no difference between the Centre and the State. After we became a Republic, there is a difference between Govt and State, Sibal argued.

He also quoted Nehru, "This provision is obnoxious. The sooner we get rid of it, the better. It should have no place"

To this, the SG responded, "What Nehru could not do then, we are trying to do now."

On the last occasion, the court had decided to hear preliminary arguments on the issue of reference and had asked all the parties to file their written submissions on the issue, and the Central Government to file its affidavit on the issue of challenge to the validity of the law.

Pursuant to the court's order, the Solicitor General of India through his written submissions asserted before the Supreme Court that the judgement in Kedar Nath Singh is a good precedent and that it requires no consideration. He has also submitted that isolated instances of misuse cannot be a ground to uproot the precedent that has withstood the test of time for over six decades.

Meanwhile, the petitioners had filed an application seeking stay on operation of Sec 124A in event the Court decides to refer the matter to a larger Bench. As alternative relief, they sought direction that no fresh FIR be registered for the offence of Sedition under Section 124A, during the pendency of the case and that all pending investigations and proceedings remain stayed.

On an earlier occasion, after Solicitor General had submitted that the Central Government's counter-affidavit is ready the bench had posted the matter for final disposal after directing the Centre to file its affidavit by the end of this week while clarifying that no further adjournment would be granted.

However, pursuant to the court's orders two subsections applications have been filed by the Centre seeking time to file the counter.

While issuing notice on the petitions in July 2021, the CJI had orally made critical remarks against the provision.

"Is it still necessary to retain this colonial law which the British used to suppress Gandhi, Tilak etc., even after 75 years of independence?", the CJI had asked the Attorney General for India.

"If we go see the history of charging of this section, the enormous power of this section can be compared to a carpenter being given a saw to make an item, using it to cut the entire forest instead of a tree. That's the effect of this provision", the CJI had said.

In April 2021, another bench led by Justice UU Lalit had issued notice on a petition filed by two journalists challenging Section 124A IPC.