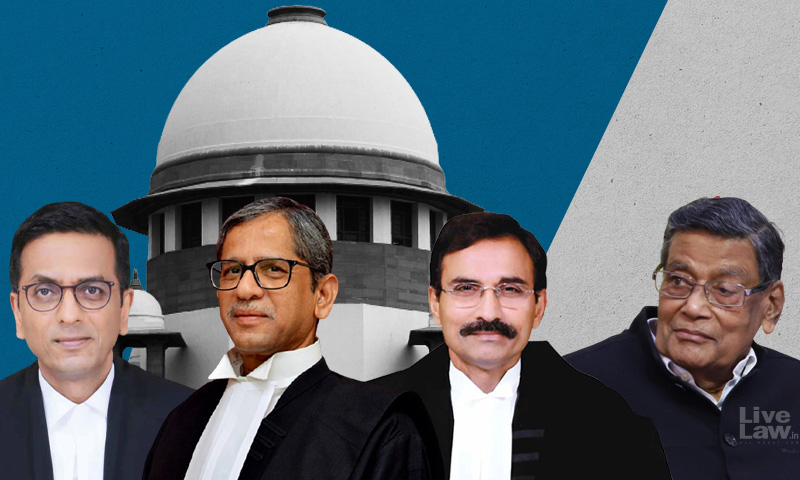 The Supreme Court on Wednesday took objection to how the Central government has affected appointments to tribunals.At the outset, CJ N . V . Ramana raised the issue of the premature retirement of Justice A. I. S. Cheema as NCLAT chairman- "The department has hurriedly on 11th of September made arrangements and he has been replaced by another gentleman, Justice M. Venugopal. I don't know how...

The Supreme Court on Wednesday took objection to how the Central government has affected appointments to tribunals.

"With respect, I think we are very much unhappy with the way the issues are going on and how the decisions are taken. I want to tell you one thing – I am also one of the persons who was part of the selection committee for NCLT. We have interviewed 534 candidates for judicial posts and 425 for technical posts. Out of that, 11 judicial members and 10 technical members were selected. We are taking into consideration all inputs and making recommendations in order of merit for appointing judicial and technical members in NCLT. Out of these 11 selected judicial members, they selected only 4. They went to the waitlist and chose 3 in the waitlist. Same with the technical members also. We travelled across the country, the corporate affairs secretary and law secretary were there. Another judge, Justice Surya Kant, was there. This is a waste of time for us then. We spent a lot of time. During Covid, your government requested us to conduct interviews as early as possible. So we did so over two days via video conferencing!"

The CJ continued to state, "Now the problem is that you have selected from the judicial members list, High Court judges who held their office till 62. Now they are already 64 and they have been given tenure until 65 years. They will get only one year of tenure. Mr. AG, would you want to join the job for one year?"
As the AG sought to reply that for the members, the age is 67 and for the chairman, it is 70, Mr Datar pointed out that the NCLT is not covered under the Tribunals Act and that the age for the NCLT is 65.
"There is no consistency, I am sorry. I don't know why you want to bring trouble in all these matters. It is very unfortunate.The government has to realise this", expressed the CJ.
"My instructions are that they are prepared to reconsider", repeated the AG.
"I want to bring to your notice that the same thing has also happened in the ITAT. In TDSAT also, Justice Rao has conducted interviews and made recommendations 1-1 and 1/2 years back", continued the CJ.
Justice Chandrachud added, "As regards NCDRC, where I was part of the selection committee with other two members of the bureaucracy, two senior secretaries, there also the list was truncated and only a few people have been appointed."
The AG responded that some of the persons recommended to have been absorbed in other jobs at the High Courts.
Justice Rao noted, "In the TDSAT also, to all knowledge, only the chairman is continuing. No appointments are being made. Recently, I was called by the Secretary to be told that the SCSC has been constituted for the selection of chairman and I told him that it must first be seen that the members are appointed."
"The secretary has appointed one member on 11th September", told the AG.
"What about other names? We had recommended four names for two posts?", asked Justice Rao.
"The second appointment could not be made as both the individuals recommended by the SCSC have been appointed elsewhere", told the AG.
"This is the problem. There is a delay of a year and a half. The bureaucrats are also not ready to wait and they would want to be adjusted in some other post. The very exercise of the selection that we conducted would become useless", commented Justice Rao.
"If you were to consider it after a week, we could reconsider the entirety of all those who were not accepted. In the reconsideration, we would appoint a very large number except those that we know there is corruption charge", assured the AG.
At this, Senior Advocate Krishnan Venugopal raised the concern as regards ITAT, indicating that the court's previous judgement says that the recommendations would have to be appointed. "There is no reason given for not appointing. There is cherry-picking. I would request the court for notice to be issued in the contempt", he prayed.
Asserting that the government has made appointments in the ITAT, the AG insisted that they would like to file a counter before issue of notice.
"Subject to the consideration of the submissions made by you, so far as the appointment is concerned, the contempt is concerned, we will hold our hands for one more week. Let's see what will happen. So far as the challenge to the 2021 Act is concerned, we have already issued notice. Please file counter affidavit within a week", said the CJ.
The bench then heard the plea regarding the legality of notification issued by the Union Ministry of Finance transferring & attaching the jurisdiction of Debt Recovery Tribunal, Jabalpur to Debt Recovery Tribunal, Lucknow in the absence of availability of presiding officer at DRT Jabalpur.
Justice Chandrachud asked the AG,

"Imagine a litigant coming from Jabalpur to Lucknow! Is he supposed to get a new lawyer or take his own lawyer from Jabalpur to Lucknow? Likewise Chhattisgarh! And the Kerala High Court has quashed a similar notification transferring jurisdiction from Kerala to Bangalore! That has now countrywide application. It is not just confined to Kerala. Of 23rd March 2021 is the Kerala High Court judgement which lays down the law! There is no challenge to it. Six months have gone by. So how can people be left in the lurch? When they go to the High Court, no court interferes under 226! They ask the person to follow their remedy under SARFAESI"

"Everywhere this is the problem in the country", agreed the CJ.
The bench expressed concern about access to justice.
"We are prepared to file a counter affidavit within a week", said the AG.
"We are waiting very patiently. A counter affidavit is not the solution. We are telling the government to make an appointment!", said the CJ.
"I agree with the court", said the AG.
"At least give a judicial officer jurisdiction over the DRT cases in Jabalpur. The litigants are in distress. I will tell you the practical difficulty. If the bank issues notice under 132) of the SARFAESI, the litigant has no remedy. This is followed by taking of possession under 13(4). The High Court says it will keep its hands-off. The bank will take possession of the factory, the house, or some other asset of the debtor. There is absolutely no recourse to the debtor", said Justice Chandrachud.
The AG informed that the government had approached a tribunal member in Jabalpur to take over as presiding officer but they had declined. "We will find somebody else in Jabalpur who will be prepared to take over the DRT", he assured.
The CJ noted, "There is no officer in Visakhapatnam or Hyderabad. For both states of Telangana and Andhra, you have to go to Calcutta. Calcutta was put in charge. In Calcutta also, now there is nobody. So you have been put in charge in Lucknow. It is a pitiable condition."
"I agree with your lordships fully", said the AG.
"Please tell the government you have to make the appointments", said the CJ.
Justice Rao also indicated how the top court was faced with a matter last week arising on account of a difference of opinion between the chairman and the other member of the SAT- "SEBI was before us assailing the judgement which went against them. According to the provisions of the statute, there has to be a third member who is not there. The technical member is not appointed. So there was a request for an interim order. So we told them to get the matter listed next week. So it is difficult for the tribunal to function. Please make sure that the appointments are made. We have a practical problem."
"Whatever problems we may have, appointment of members is the only solution", agreed the CJ.
"So far as the SAT is concerned, the SCSC has not met and it has not recommended any person. We have nominated 2 secretaries...But otherwise, we are also entitled to appoint by transfer", said the AG.
"Please ask your officers. Because they are saying the Supreme Court has not recommended the names, I want to tell you something. For the appointment of NCLT/NCLAT chairman, already two times there is a letter written by the Supreme Court. But then they are not responding. We will recommend. But they say it has to be under the new Act and they have to frame rules. They have to come to us and pursue their work. We can't go to the department or the offices to make recommendations. Even if we recommend, there is no guarantee you will appoint. If we recommend something, they say rules are coming in the way", told the CJ.
"For SAT, temporarily two persons could be appointed...", suggested the AG.
"I will ask the office to place the papers before me. Today itself will do it. Let them write a letter. We will permit them if they want. We have no issue. We want resolution of the issue. Ask some responsible officer to approach us. It will be cleared within no time", said the CJ
When Mr. Datar prayed that the court also direct the government to not add the 'until further orders' caveat in the appointment letters, the CJ said, "We would want the appointments to come first"
"We have expressed earlier what order we intend to pass. If without inviting any order from the court, you can do it, you are welcome to", said the CJ to the AG. "Certainly", replied the AG.
"Right from L. Chandra Kumar's case, this court has been speaking of an independent body for making appointments. You were also in agreement with us when we spoke about the National Tribunals Commission. Till the national commission is constituted, we had said there should be one separate wing in the finance ministry to take care of all these appointments etc. We do not know whether anything has happened. Regarding National Tribunal Commission, we have not heard anything at all. The government has to come up with an independent body, only then we would see some results!", observed Justice Rao.
"I can make a note of it and get some response", said the AG.
"The problem is that everyone is aware of the problem. Nobody is on the question of solution. We have already indicated in Roger Matthews and subsequent cases about the National Tribunals Commission. We have given the solution also. It is for you to implement or not. Now we don't want to trouble you more than this. We will adjourn for a week. Please ask the government to get some proper instructions", said the CJ.
The bench then adjourned the matter to grant time to the government to file its counter-affidavit and for progress on the appointments.