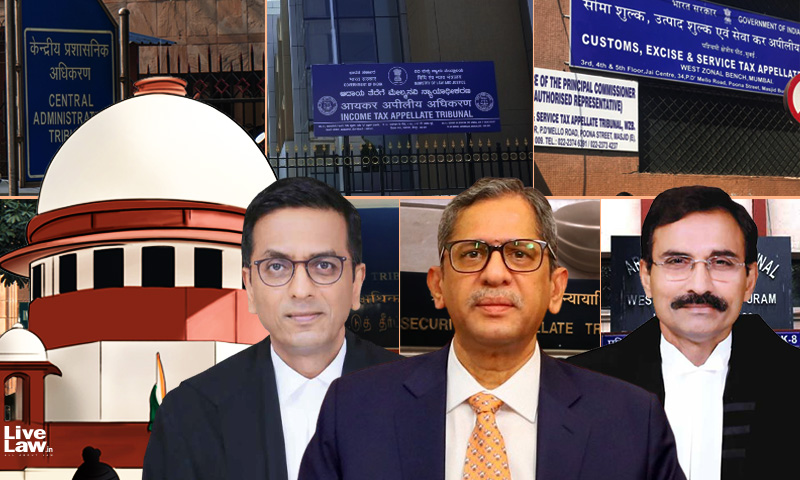 The Supreme Court on Wednesday continued its criticism of the Union Government in the matter relating to filling up of vacancies in Tribunals.A special bench comprising Chief Justice of India NV Ramana, Justice DY Chandrachud and Justice L Nageswara Rao expressed unhappiness with the Government for the manner in which the recent appointments were made to the National Company Law Tribunal...

The Supreme Court on Wednesday continued its criticism of the Union Government in the matter relating to filling up of vacancies in Tribunals.

A special bench comprising Chief Justice of India NV Ramana, Justice DY Chandrachud and Justice L Nageswara Rao expressed unhappiness with the Government for the manner in which the recent appointments were made to the National Company Law Tribunal (NCLT) and Income Tax Appellate Tribunal(ITAT).

"I have seen the selection list of NCLT. The selection committee recommended 9 Judicial Members and 10 Technical Members. The  appointment letters indicate cherrypicking of 3 names from select list and others from the wait list, ignoring others in select list. In service law, you can't go to wait list ignoring the select list. What kind of appointment is this?", Chief Justice of India NV Ramana asked the Attorney General.

The CJI said that the same problem was there with the names cleared by the Centre for ITAT.

"With due respect, we are very unhappy with the way in which things are going on and decisions are being taken.  We select people after conducting interviews and govt says we can't elect them. I am also part of the selection committee for NCLT. We have interviewed 534 for judicial members and over 400 for technical members. Out of that, we have given 10 Judicial Members' list and 11 Technical Members' list.  Out of the judicial members' list, they selected 1,3,5, 7 and then went to wait list", the CJI said.

The CJI said that the Supreme Court judges undertook elaborate exercise to shortlist the names during the COVID and the entire efforts are going in vain.

"We travelled across the country. The corporate affairs secretary and law secretary were there. Another judge, Justice Surya Kant, was there. This is a waste of time for us then. We spent a lot of time. During Covid, your government requested us to conduct interviews as early as possible.  So we did so over two days via video conferencing. We wasted so much time", the CJI expressed exasperation.

The CJI pointed out that the as per the latest appointment orders, the judicial members will only get a tenure of one year effectively. High Court judges who retired at the age of 62 years were recommended. However, the Centre kept the selections pending for nearly two years. The CJI said that the appointment orders have been now issued, when the judges are the age of 64 years. This means, they are left with only one year term at the office before the retirement age of 65 years.

"Which judge will go to join this job for one year?", the CJI asked.

"There is no consistency, I am sorry. I don't know why you want to bring trouble in all these matters. It is very unfortunate.The government has to realise this", expressed the CJ.

The Attorney General KK Venugopal submitted that the Government has the right to not accept the names recommended by the committee. But this submission was not appreciated by the bench.

"We are democratic country following rule of law. We can't accept that", the CJI said.

"What is the sanctity of process if the government has the last word?Selection committee undertakes elaborate process to short-list the names", Justice Nageswara Rao observed.

Justice Rao pointed out that the same thing was happening with TDSAT. Justice Chandrachud, who heads the selection committee for NCDRC, added ,"In NCDRC also recommendations were made, the list was truncated and appointments were made".

The bench said that it was distressing that the Centre was treating the recommendations made the Selection Committees comprising two Supreme Court judges and two Secretaries with disdain.

Justice Rao pointed out that the judgments in Madras Bar Association cases had directed that the Government should clear the recommendations within 3 months. The Attorney General maintained that the wait-list was gone into after exhausting the selection list.

Faced with adverse comments from the bench, the Attorney General said that he has instructions to say that the government is prepared to reconsider.

"I have instructions from the government that we are ready to reconsider", the AG said.

Senior Advocate Arvind P Datar, appearing for the Madras Bar Association, pointed out that the latest appointment orders for NCLT and ITAT mention that the appointments are "until further orders". This means that the members can be terminated at any point of time. Datar highlighted that this was a "disturbing trend", which needs to be stopped by the Court.

The Attorney General conceded that the wordings should have been "until further orders of the Supreme Court" as the validity of the Tribunals Act is now under challenge.

"Mr AG if you can do something without inviting orders from the court then we are happy", the CJI told the AG. The CJI said that the appointment of members was the only solution.

The Attorney General assured the bench that the appointments will be made within two weeks and if appointments are not made, concrete reasons will be furnished.

"We are giving you two weeks time. Come with a comprehensive plan for appointments", the CJI said while adjourning the matters.

On the last occasion, Supreme Court had harshly criticized the Union Government over the delay in filling up of the vacancies in Tribunals and also for passing Tribunals Reforms Act, which the Court termed a "virtual replica of the provisions struck down by the Court".

During an earlier hearing on August 6, the CJI had read out a chart of the vacancies of Tribunals and had observed that the Court is getting the impression that bureaucracy does not want the Tribunals to function.

Supreme Court had then sternly asked the Union Government to make a "clear stand" as regards the timely filling up of vacancies. The Court had warned the Centre that it would summon top officials of the government before the Court if the situation is not remedied, and told Solicitor General of India Tushar Mehta that it is getting an impression that the bureaucracy does not want these bodies to function.

The Bench made the observations while hearing the following pleas: