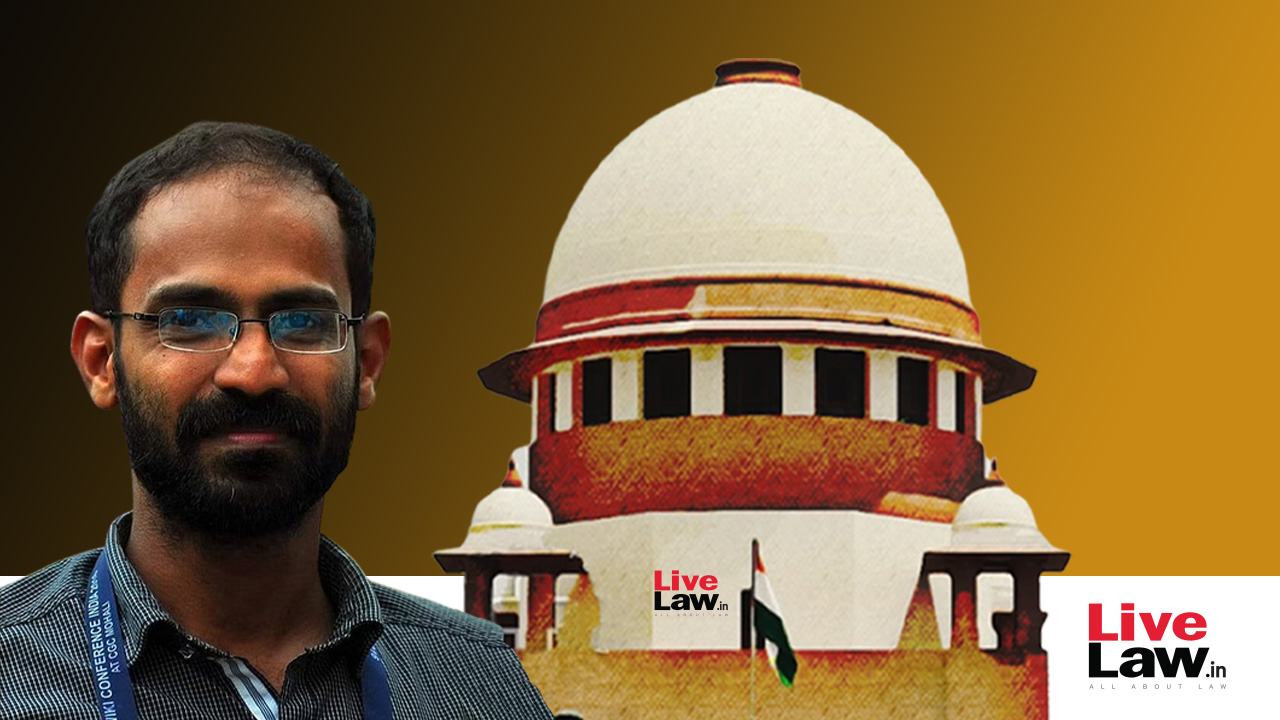 The Supreme Court on Friday granted bail to Kerala journalist Siddique Kappan, who has been under the custody of UP Police since October 6, 2020 in connection with the Hathras Conspiracy case.The Court asked him to be in Delhi for next 6 weeks and allows him to go back to Kerala after that on conditions like he shall mark his presence with local police station every week and other...

The Supreme Court on Friday granted bail to Kerala journalist Siddique Kappan, who has been under the custody of UP Police since October 6, 2020 in connection with the Hathras Conspiracy case.

The Court asked him to be in Delhi for next 6 weeks and allows him to go back to Kerala after that on conditions like he shall mark his presence with local police station every week and other conditions.

A bench comprising Chief Justice of India U.U. Lalit and Justice S. Ravindra Bhat passed the order while allowing the appeal filed by Kappan against the Allahabad High Court's order denying him bail. Kappan was kept under custody for alleged offences under Sections 17/18 of UAPA, Sections 120B, 153A/295A IPC, 65/72 IT Act for alleged conspiracy to incite riots following the gangrape-murder of a Dalit minor girl in Hathras.

"Kappan was in meeting of PFI in Sep 2020. It was said in the meeting that funding had stopped. It was decided in the meeting that they will go to sensitive areas and incite riots. On October 5, they had decided to go to Hathras to incite riots. He was funded with Rs 45,000 to create riots. He claimed to be accredited to a newspaper. But we have found that he was accredited to the official organization of PFI. PFI has to be notified as a terrorist group. One State, Jharkhand, has notified it is a terrorist group. He was there to incite riots. It's a little bit like what happened in Bombay in 1990."

CJI Lalit further enquired what was found on Kappan's person or around him when he was taken into custody. To this, Sr. Adv. Jethmalani submitted that ID cards and some literature was found. CJI asked–

"One is ID cards, and some literature, any explosive founds? According to you literature was found in his custody?"

To this Jethmalani replied in negative and stated that no explosives were found and Sr. Adv. Sibal added that the literature was found in car. Here, the CJI noted–

"At best you can say this man was travelling in a car, and he was apprehended with three others, there was some literature in the car, the other three are linked with PFI?...They are accused of what offences...153A?"

Sr. Adv. Jethmalani submitted that this was also a fit case for invoking 124A too as the accused persons were creating disaffection using the rape of a minor girl. CJI Lalit asked if there was any possibility of culmination of trial to be concluded soon. To this, Jethmalani replied stating that the State was attempting to expedite trial.

Literature found with Kappan: Was it Provocative?

The bench enquired if the accused had done anything in furtherance of the literature that was found in the car. To this, Jethmalani submitted that the State had statements of co-accused to prove the same. However, the CJI stated that the statements of the co-accused could not be used as evidence. When Jethmalani stated that they were attempting to get an approver, CJI Lalit remarked that if an attempts to make somebody approver was going on, it meant that the matter was not ripe for trial.

The bench then delved into the issue of whether the literature found was provocative in nature after Sr. Adv. Jethmalani referred to it as "a toolkit for riots".

At this juncture, Sr. Adv. Sibal intervened and stated that the literature was for "Justice for Hathras Girl". The bench asked the State which of the material in the literature was supposed to be potentially dangerous. Jethmalani submitted–

"What it indicates is they were on the way to Hathras. This is the kind of literature they were going to distribute amongst the Dalit community..."

He highlighted the content of the literature which discussed how the police had cremated body without letting the family of the victim know. He stated–

"So the feelings are stirred up. This is a propaganda, which the Dalits themselves are not doing. The PFI is doing. There are directions on how to send emails, social media campagins."

However, the bench was not satisfied with the arguments and noted–

"Every person has the right to free expression. He is trying to show that victim needs justice and raise a common voice. Is that a crime in eyes of law?", CJI Lalit asked.

"Similar protests were in 2012 at India Gate, which led to a change of law. Till now you have not shown anything provocative",Justice Bhat asked referring to the Nirbhaya protests.

"Is there a document which shows that he must indulge in rioting?", CJI Lalit asked.

Sr. Adv. Sibal also highlighted that some of the documents were not even related to India and that the entire case was "not prosecution, but persecution."

Here, Jethmalani drew the attention of the court to a toolkit which provided with instructions on protection during riots, such as what to wear and what not to wear, on how to tackle tear gas, and if you see black people running, run with them.

However, Sr. Adv. Sibal was quick to interrupt stating that the toolkit was from "Black Lives Matter" protests from the United States of America.

After the arguments, CJI Lalit stated that the bench was granting bail to Siddique Kappan.  He narrated the order which reads as follows:

"The appeal challenges Allahabad High Court order. The appellant was taken in custody on 6 October 2020 and since then has been in custody in connection with Section 17/18 UAPA, 124A, 153A 295A IPC, 65/72 IT Act. It appears that chargesheet has already been filed on April 2, 2021, however the matter has not been taken on consideration on whether charges need to be framed or not. The application for bail having been rejected by High Court, the instant appeal has been preferred. We have heard Kapil Sibal for appellant and Mahesh Jethmalani for the State. We have been taken through some documents on record. At this stage, we refrain from dealing with and commenting on the progress of investigation and the materials collected by prosecution as the matter is at framing of charge."

Accordingly, considering the length of custody undergone by the appellant and the peculiar facts and circumstances of the case, the Court directed as under :

2. It shall be the condition of bail that the appellant shall stay within the jurisdiction of Jangpura in Delhi.

3. The appellant shall not leave the jurisdiction of Delhi without the express permission of trial court.

5. The appellant shall either in person or through lawyer shall attend the trial court on every single day.

The court also noted that–

Accordingly, the appeal was disposed of.

Kappan, who has now spent almost two years behind bars, was arrested, along with other accused by the UP police in October 2020 while they were proceeding to report the Hathras rape-murder crime. While initially he was arrested under the apprehension of causing a breach of peace, subsequently, he was booked under the UAPA alleging that him and his co-passengers were trying to incite communal riots and disrupt social harmony in the wake of the Hathras gangrape-murder case.

On August 23, Kappan's co-accused cab driver Mohammad Alam, was enlarged on bail by the High Court. It was observed in the bail order that "incriminating material" was recovered from Kappan's possession but, no such material was recovered from Alam.

In the Special Leave Petition filed through Advocate Pallavi Pratap, Kappan had submitted that the intention of his visit was to discharge his professional duty of reporting on the infamous case of the Hathras rape/murder. However, he was taken into custody on the basis of "trumped up" charges.