Centre Can't Use Power To Notify IBC Sections Only As Regards Personal Guarantors, Salve Argues For Anil Ambani In SC 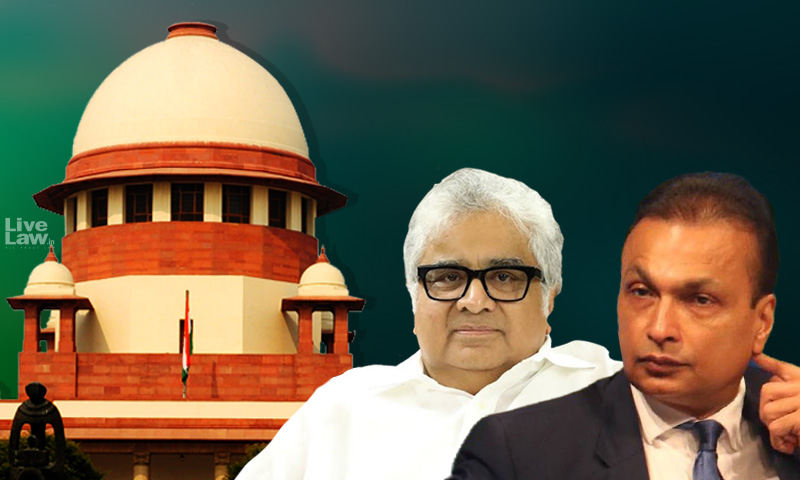 The Supreme Court on Thursday heard the arguments of Senior Advocate Harish Salve on behalf of Reliance Communications head Anil Ambani on a plea challenging the Central Government notification extending provisions of the insolvency law to personal guarantors."You cannot specify the subject matter as regards which the section comes into force, you can only specify the section" , Salve...

The Supreme Court on Thursday heard the arguments of Senior Advocate Harish Salve on behalf of Reliance Communications head Anil Ambani on a plea challenging the Central Government notification extending provisions of the insolvency law to personal guarantors.

"You cannot specify the subject matter as regards which the section comes into force, you can only specify the section" , Salve submitted challenging the Centre's November 15, 2019 notification bringing into effect certain provisions of Part III of the IBC, i.e., Insolvency Resolution and Bankruptcy For Individuals and Partnership Firms, from December 1, 2019 as regards only 'personal guarantors to corporate debtors'.

Mr. Salve indicated that the impugned notification was issued in exercise of the power under section 1(3) of the IBC which states that the Code shall come into force on such date as the Central Government may, by notification in the Official Gazette, appoint.

"You can't say that the section will apply only so far as this and this is concerned. This is conditional legislation, not delegated legislation", he urged.

He took the bench through section 2(e), which provides that the provisions of the Code shall apply to 'personal guarantors to corporate debtors'. He advanced that section 2 extends the application of the Code to the following entities-

a) any company incorporated under the Companies Act, 2013 or under any previous company law; (b) any other company governed by any special Act for the time being in force, (c) any Limited Liability Partnership; (d) such other body incorporated under any law for the time being in force, as the Central Government may, by notification, specify; (e) personal guarantors to corporate debtors; (f) partnership firms and proprietorship firms; and (g) individuals, other than persons referred to in clause (e).

"It is their misunderstanding that section 2(e) is to be read with an implied power that the Centre can extend the provisions of the Code to only 'personal guarantors to corporate debtors', argued Mr Salve.

He took the bench through the other provisions which have been brought into force by the impugned notification, beginning with section 78, by virtue of which the applicability of Part III of the Code is extended to matters relating to fresh start, insolvency and bankruptcy of individuals and partnership firms where the amount of the default is not less than one thousand rupees.

He advanced that there is no power in the central government to say that section 78 shall apply to any one class of individuals. It was his argument that this would result in a "criss-cross of problems that the Centre has not realised" – "bankruptcy of individuals goes to the DRT. The resolution also goes to the DRT. They have tried to pick out personal guarantors to corporate entities and place their resolution before the NCLT. If one individual says that he has no money, where is the question of resolution?", he advanced.

"By virtue of section 60 (The Adjudicating Authority, in relation to insolvency resolution and liquidation for corporate persons including corporate debtors and personal guarantors thereof shall be the National Company Law Tribunal), the adjudication in relation to corporate debtors lies before NCLT. I assume that they have intended that where there are resolution proceedings, the Adjudicating Authority will in that case be the NCLT. But the problem is the language of section 179 – we don't know if 'insolvency' is limited to insolvency resolution or bankruptcy also. If it is so, then an awkward situation will result where one bankruptcy runs in the NCLT and one in the DRT", continued Mr. Salve.

Section 179 stipulates that subject to the provisions of section 60, the Adjudicating Authority, in relation to insolvency matters of individuals and firms shall be the Debt Recovery Tribunal.

"Section 1(3) does not authorise the picking of one class. The Ministry of Corporate Affairs in its reply has submitted that the government of India was so empowered under section 1(3) and that it has only effected the mandate of the Parliament. It has denied that the notification issued is in violation of 1(3). It says that the proviso of 1(3) read with section 2 implies that the government has the power. Can it be that they are not familiar with the basic principles of conditional legislation?", pressed Mr. Salve.

"The Parliament has not empowered the central government to divide the section. They should have gone back to the Parliament and had section 1(3) amended so as to add 'different classes of creditors' or 'different classes of debtors' to it. Section 78 does not use the term 'guarantors'. Section 2(e) only says that the Code is to apply to the guarantors of the debtors", he continued.

"The central government has exercise legislative powers and bisected the section. They have sought power to extend the provisions with modifications here", concluded Mr. Salve.

By a Notification dated 15.11.2019, the Ministry of Corporate Affairs, Government of India in exercise of its power conferred under Section 1(3) of the Insolvency and Bankruptcy Code, 2016 brought into force the following provisions of the Insolvency and Bankruptcy Code, 2016 insofar as they related to 'personal guarantors to corporate debtors' with effect from 01.12.2019: -

ii. Section 78 (except with regard to fresh start process) and Sections 79;

Writ Petitions were filed in the High Court of Delhi and other High Courts challenging the Notification dated 15.11.2019 and the Insolvency and Bankruptcy (Application to Adjudicating Authority for Insolvency Resolution Process of Personal Guarantors to Corporate Debtors) Rules, 2019. The Writ Petitioners also sought a declaration that Section 95, 96, 99, 100, 101 of the Insolvency and Bankruptcy Code, 2016 are unconstitutional in so far as they apply to personal guarantors of corporate debtors.

The Insolvency and Bankruptcy Board of India had filed Transfer Petitions under Article 139 (A) read with Article 142 of the Constitution of India seeking transfer of the Writ Petitions filed before High Courts to the top court.

Transferring the pleas from all High Courts to itself, the apex court had in October last year clarified that any interim orders passed by the High Courts shall continue.

In a plea moved by Anil Ambani challenging the appointment of a Resolution Professional for a personal guarantee given by him for loans taken by Reliance Communications Ltd (RCom) and Reliance Infratel Ltd (RITL) from the State Bank of India, the Delhi High Court had in October last year issued notice and stayed the proceedings initiated against him under Part III of the Insolvency & Bankruptcy Code. A Division Bench of Justice Vipin Sanghi and Justice Rajneesh Bhatnagar had, however, restricted Anil Ambani from alienating his assets till the next date of hearing.

On September 17, 2020, the Supreme Court had declined to vacate a stay, earlier granted by Delhi High Court towards the ongoing IBC proceedings against Reliance Group Chairman Anil Ambani.

In August 2016, Mr. Anil Ambani had given personal guarantees for two loans worth nearly INR 5,65,00,00,000 (Rupees five hundred and sixty-five crore) and INR 6,35,00,00,000 (Rupees six hundred and thirty-five crore) extended to his companies Reliance Communications (RCom) and Reliance Infratel Ltd (RITL) respectively. Reportedly, the loan accounts of RCom and RITL had been declared non-performing assets in 2017 after they failed to pay off the debt.

In March 2020, the State Bank of India (SBI) had filed a petition before the National Company Law Tribunal (NCLT) Mumbai bench under Section 95 of the IBC, requesting the NCLT to appoint a Resolution Professional within seven days to look into the case. Last week, the NCLT had ordered insolvency proceedings against Mr. AnilAmbani for defaulting on the aforementioned loans and appointed a Resolution Professional in the matter. Mr. Anil Ambani filed a petition before the High Court of Delhi, challenging the appointment of a Resolution Professional by the NCLT to verify the factum of whether or not he had given a personal guarantee of approximately INR 12,00,00,00,000 (Rupees one thousand two hundred crores) against its loans to RCom and RIPL.