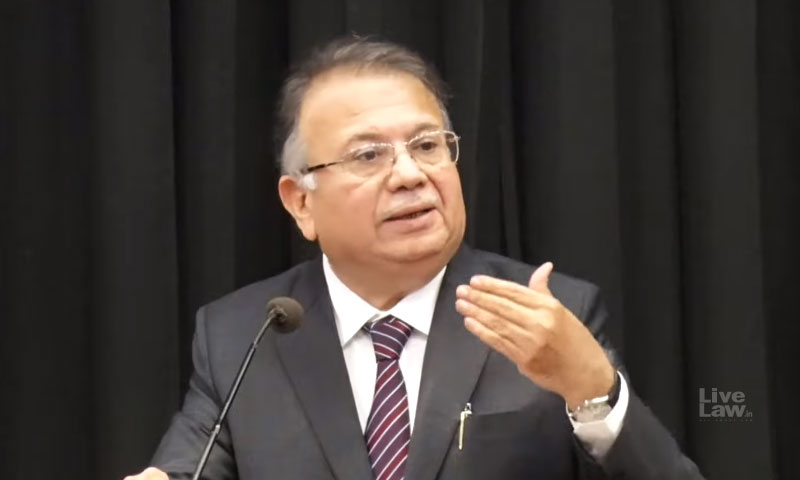 Former Chief Justice of Delhi High Court, Justice (Retd) AP Shah has expressed disappointment at the manner in which the Supreme Court has been functioning lately. As per his remarks, made while speaking at the 4th LC Jain Memorial Lecture on Monday, the top court "seems to be drifting from a rights' court to an executive court".The Lecture was organized by IIC,ADR and LC...

Former Chief Justice of Delhi High Court, Justice (Retd) AP Shah has expressed disappointment at the manner in which the Supreme Court has been functioning lately.

As per his remarks, made while speaking at the 4th LC Jain Memorial Lecture on Monday, the top court "seems to be drifting from a rights' court to an executive court".

The Lecture was organized by IIC,ADR and LC Jain Family.

"[Supreme Court is] behaving in a way that is indistinguishable from the government, often issuing important policy decisions through its judgements, prioritising cases in specific - and sometimes worrisome - ways, and undertaking actions that would ordinarily be considered the domain of the government."

These remarks find their genesis from the indulgence of the Supreme Court in preparation of the National Register of Citizens.

"Inarguably, this was an administrative exercise, which the executive and the bureaucracy ought to have been responsible for," Justice Shah said.

This indulgence, he explained, has ousted the Supreme Court from its power to correct any illegality that may have been committed in a process that identified 1.9 million persons as foreigners.

"Instead, we had a process that was "overseen" by the Supreme Court, and primarily under Chief Justice Gogoi, although many would argue that the Court "oversaw" it less, and "controlled" it more. As a result of this, we were faced with a situation where any concerns with the NRC became impossible to challenge judicially, for the judiciary itself was conducting the process!"

By allowing delivery of documents and facts in sealed covers, that otherwise ought to be made public, the Court is "signalling" that it prefers the work ethic of the executive, believing truly that such secrecy is essential to deliver justice, Justice Shah said.

"Secrecy can - in limited circumstances - be justified by the executive, but the distinguishing feature of a judicial institution is transparency, for only then, can the institution assure the people that it is giving everyone a fair and equal chance to be heard."

He has also expressed disagreement with a 9-judge bench decision of the Supreme Court as per which, questions of law can be referred to larger bench in a review petition.

On Monday, the bench headed by CJI SA Bobde rejected a contention challenging the legality of referring questions to a larger Bench in a review petition, without giving any reasons for it conclusion.

In the backdrop, the 2018 Sabarimala verdict of the Supreme Court came to be challenged in a batch of review petitions. However, in November 2019, while hearing these review petitions, the Supreme Court passed a curious order in Kantaru Rajeevaru v. Indian Young Lawyers Association, directing that the Sabarimala review petition as well as other writ petitions involving 'questions related to essential religious practices will remain pending until the determination of the questions (formulated by the majority) by a larger bench.

Notably, the review petition itself was not referred to a larger bench; and was only kept pending till the adjudication of the referred questions by the larger bench.

In this context, Justice Shah said,

"The majority's order in the Sabarimala review petitions seems to be beyond the scope of Article 137 of the Constitution… in Kantaru Rajeevaru, the Court directed a fresh hearing of the Sabarimala matter, by a larger Bench, without any reasons for the review, and without pointing out any grave errors in the judgment under review. The order did not even endorse Justice Malhotra's dissent in the original Sabarimala judgment. Instead it tagged the Sabarimala matter with other pending cases that raised common issues regarding the interpretation of Article 25 and 26, even though those cases were not before the Court."

He added that it also raises questions about the perceived finality of Supreme Court judgments.

"The Supreme Court has often been characterised as supreme in the sense of final, but not infallible. The Court's order in Kantaru Rajeevaru has now upended the assumptions about its judgments being final."

He also said that omission to stay the operation of the Sabrimala judgment in the meanwhile has resulted in havoc, as the implementation of the judgment hangs out to dry. He cited an incident of December 2019, whereby the Supreme Court declined to pass any order on the petition by two women activists seeking a direction to ensure safe entry in the Sabarimala temple on the ground that the issue was "very emotive"; it did not want the situation to become "explosive"; and that despite there being no stay, the fact of the referral meant that the judgment was "not final".

"The aftermath of the Sabarimala judgment has given rise to various causes of concern, including the impunity of the Central Government in ignoring the judgment of the Supreme Court, the re-opening of the judgment through a referral in the guise of a review, and the implications for the rule of law."

He then moved on to analyze the effects of the "unanimous, but anonymous" Ayodhya judgment.

He said that the Supreme Court's approach in the case was questionable since,

"despite acknowledging the illegality committed by the Hindus, first in 1949, by clandestinely keeping Ram Lalla idols in the mosque, and second, by wantonly demolishing the mosque in 1992, the court effectively rewarded the wrongdoer."

This, Justice Shah said, goes against the doctrine of equity, which requires one to approach the Court with clean hands.

He also tore into the 116 page anonymous "addendum" to the judgment, that sought to reinforce and reiterate the "faith, belief and trust of the Hindus" that the "disputed structure is the holy birthplace of Lord Ram".

"The need for this addendum is highly questionable given that the bench had already unanimously decided the case on constitutional principles, and the addendum was not serving the role of a concurring opinion. Instead, the addendum seems to reinforce the supremacy of Hindu theological considerations," he said.

Justice Shah also spoke about the ill effects of the Supreme Court's orders on the Kashmir crisis. He said, the court missed out on an opportunity to come out strongly in favour of fundamental rights, and fulfill its role as the "sentinel on the qui vive".

He pointed out the Kashmir crisis involved three sets of petitions, relating to (i) the communication shutdown and imposition of Section 144 orders; (ii) the habeas corpus petitions filed against illegal arrests and detentions under the draconian Public Safety Ac; and (iii) the constitutional challenge to abrogation of Article 370 of the Constitution.

However, "In all three cases, the Court has failed to give a satisfactory resolution, even after six months," he remarked.

He lauded the court for spelling out the correct law in the Anuradha Bhasin's case, but criticized it at the same time for not implementing it by granting relief to the Petitioners.

"Judicial review involves more than a mere declaration of the law. It requires the application of law to the facts at hand. And the facts, quite simply, are that for more than 150 days, and even today, the people of Kashmir are without a proper functioning internet," he said.

Justice Shah has also expressed deep agony over the court's prioritization of cases, and the manner in which it decided to deal with police excesses during the anti-CAA protests.

"In the case of the CAA, too, the Chief Justice of India first says petitions will be heard only after people stop violence, as though good behaviour were a condition precedent for seeking protection of rights," he remarked.

He said, we are in a situation where anyone who opposes or disagrees with government policies is branded as "anti-national"

"We see how agencies like the Central Bureau of Investigation or the police are used to intimidate political opponents, and harass political activists. The country appears to be completely polarised because of the communal agenda followed by the ruling regime. Hate speech has become normal, with national-level politicians leading the charge. The government has taken upon itself the mantle of deciding who is entitled to protections and who is not, by othering entire segments of the people, with party leaders labelling Muslims variously as beef-eaters, infiltrators, traitors and potential terrorists."

He also drew attention towards the gradual digression of our country from federalism, marked especially by Centre-State disagreements on the Citizenship Amendment Act, the NRC and the NPR.

This may be in context with the state governments of Kerala, West Bengal and Rajasthan, passing anti-CAA resolutions, requesting the Central Government to repeal the Act.