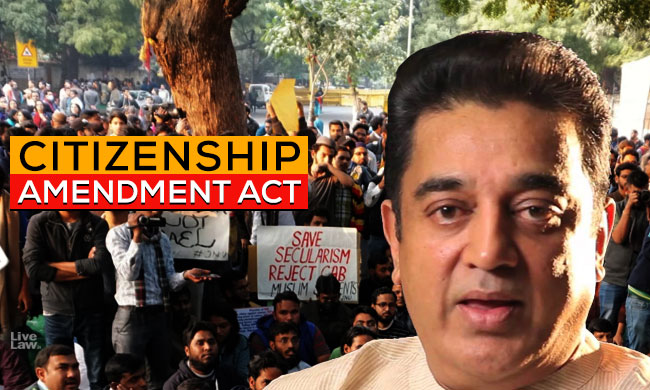 A PIL has been filed by Makkal Needhi Maiam, a political party in Tamil Nadu against the Citizenship (Amendment) Act, 2019. The petition remarked that the Act clearly violates Article 14 and 21 of the Constitution of India and also that the classification based on the religious identity of the individual offends the fundamental principles of 'secularism'. The petition further said that...

A PIL has been filed by Makkal Needhi Maiam, a political party in Tamil Nadu against the Citizenship (Amendment) Act, 2019. The petition remarked that the Act clearly violates Article 14 and 21 of the Constitution of India and also that the classification based on the religious identity of the individual offends the fundamental principles of 'secularism'. The petition further said that the Act is also selective and arbitrary since the illegal migrants who are entitled to naturalization is restricted only to migrants from Pakistan, Bangladesh and Afghanistan who have faced religious persecution.

While saying that the Act includes only Hindus, Sikhs, Buddhists, Jains, Parsis and Chrisitians who has faced religious persecution from Pakistan, Bangladesh and Afghanistan, the petitioner also mentioned the case of State of West Bengal v. Anwar Ali Sarkar, to point out that the classification of migrants on the basis of religion is impermissible under Article 14 and cannot bring under intelligible differentia. The exclusion of similarly situated persons belonging to the minority sect of Ahmadiyya and Shia sect who faces similar persecution clearly constitutes unreasonable and arbitrary classification violative of Article 14, the petitioner added.

The petition also mentioned the case of S.R.Bommai v. Union of India, where the Supreme court has held that secularism is part of the basic structure of the Constitution of India.

The petition reitrated the meaning of Article 14 by saying that the State will treat every class of persons without discrimination and that the equal protection of law means the State will not frame laws or rules that discriminates two persons. The petition further says that the Citizenship (Amendment) Act 2019 explicitly discriminates against the Muslims and also observed that the Act excludes Tamil Hindus, Buddhists, Christians from Sri Lanka simply because they do not fall in the purview of the three countries to which this law applies. And hence that the objective of the law to offer sanctuary to those who are persecuted in their home countries cannot be accepted.

The Citizenship (Amendment) Act 2019 does not prescribe any standard principle or norm behind choosing three neighbouring countries, where it does not extend the benefit to religious minorities belonging to other neighbouring countries such as Sri Lanka, Myanmar, Nepal and Bhutan. And also that the classification of Afghanistan, Pakistan and Bangladesh is not founded on rationale principle to justify a separate special treatment for the religious minorities facing persecution on the basis of religion, said the petitioner.

The petition has also observed that, the guiding principle of the state is to single out Pakistan, Bangladesh and Afghanistan, on account of religious persecution and also that the ethnic and religious persecution against the Tamilians in Sri Lanka pose a higher degree of harm. The petition also mentioned about the Roihngya Muslims in Myanmar who had also faced the most extreme forms of inhumane persecution at the hands of the Myanmar Army.

The petitioner reitrated the fact that the Act ensures that the excluded person belonging to Non-islam Category would be entitiled to get the benefit and protection but the excluded persons belonging to the Islam religion are blatantly discriminated and denied the protection. The Act will divide the society. It will not solve the problems, rather it would create more problems, the petition added.

While stating that the Act is based on flawed perception that the Act assumes that all illegal migrants from the three nations have come to India on account of religious persecution and that this stand is not supported by any data. The petitioner added, the immigrants have themselves not declared that they came to India out of religious persecution.

The petitioner also submitted that the Constitution of India permits special provision for the religious and linguistic minorities under Articles 15(5) and Article 30. The petitioner further added, the religion and language are used with equal importance and there cannot be any special protection only on account of religion while excluding the linguistic minorities who are similarly situated.

The PIL prayed for the declaring the Citizenship (Amendment) Act 2019 to be in violation of Article 14 and Article 21 of the Constitution of India and strike down the same.
Petition by United Against Hate

A Delhi-based human rights group United Against Hate also moved the Supreme Court, challenging the constitutional validity of the Citizenship (Amendment) Act, 2019 from the touchstone of secularism and equality.

The plea states that the Act seeks to simplify acquirement of citizenship for Hindus, Sikhs, Jains, Buddhists, Christians and Parsis from Afghanistan, Pakistan and Bangladesh who came to India before December 31, 2014, to the "exclusion" of Muslims and Tamil Eelams from Sri Lanka, Buddhists from China and other neighboring countries.

This has been contended to be an impermissible, religious-based classification under Article 14 of the Constitution, lacking intelligible differentia or a reasonable nexus with the legislative object.

"amendment makes three distinctions: (i) between Muslim and non-Muslim migrants from Afghanistan, Bangladesh, and Pakistan; (ii) between migrants from these three countries and those from other countries; and (iii) between residents who migrated due to reasons of religious persecution and those who migrated due to other forms of persecution like racial or ethnic persecution. That none of these three distinctions can be termed to be reasonable classification," the plea read.

The Petitioner has further contended that the legislation is in violation of the fundamental constitutional value of secularism.

"as the result of the present amendment, a child born in India after 2003 to Hindu, Sikh, Jain, Buddhist, Parsi or Christian "illegal migrants" would qualify as a citizen by birth. If the child is born to even one Muslim "illegal migrant" parent, they would not qualify as a citizen by birth. This classification is in violation of Article 15 of the Constitution of India," the plea states.

The Petitioner pointed out that by excluding Muslims from the category of 'persecuted', the amendment did not take into account the persecution of Hazaras in Afghanistan or Ahmadiyyas in Pakistan.

Apart from the constitutional values, the Act is also contested to be in violation of the Nehru-Liaquat Agreement, executed between the Governments of India and Pakistan regarding security and rights of minorities.

Further, the Petitioner said that the present amendment where only Muslim community had been excluded from protection when read with the National Register of Citizens would highlight the fear and panic among the Muslim community.

It is also alleged to be in clear violation of the Assam Accord of 1985 as per which persons who had entered Assam from Bangladesh after March 24, 1971 were to be treated as illegal migrants.

"Assam accord provided for expulsion of illegal immigrants without making any distinction between their religious identities… the amending act is contrary to the promises made by the Government of India in Assam Accord with the student's agitators of Assam movement," the Petitioner submitted.