UAPA Amendment 2019 : PIL In SC Challenges Validity Of Power Given To Centre To Declare Individuals As Terrorists [Read Petition] 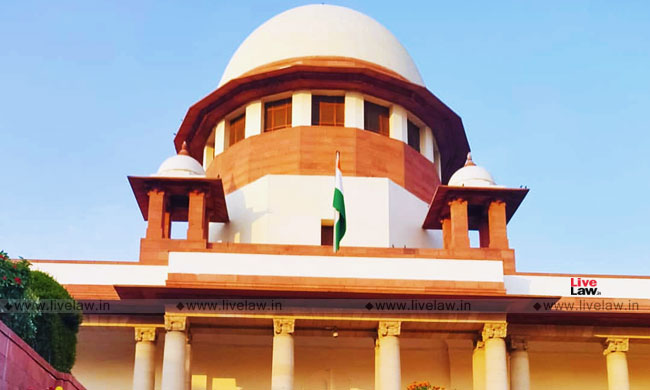 Over a week after the Unlawful Activities (Prevention) Amendment Act, 2019 was notified giving the Central Government power to designate an individual as "terrorist", a Public Interest Litigation has been filed in the Supreme Court praying that it be declared unconstitutional. Sajal Awasthi, a resident of Delhi, has moved the apex court praying for a declaration that "the...

Over a week after the Unlawful Activities (Prevention) Amendment Act, 2019 was notified giving the Central Government power to designate an individual as "terrorist", a Public Interest Litigation has been filed in the Supreme Court praying that it be declared unconstitutional.

Sajal Awasthi, a resident of Delhi, has moved the apex court praying for a declaration that "the Unlawful Activities (Prevention) Amendment Act, 2019 is violative of fundamental rights as enshrined under Article 14 (Right to Equality), 19 (Right to Free Speech and Expression) and 21 (Right to Life) of the Constitution of India."

The petitioner, who claims to be a public-spirited person, says UAPA 2019 seeks to substantially modify Chapter VI of the Unlawful Activities (Prevention) Act, 1967 and Section 35 and 36.

"The new Section 35 of the UAPA Act, 1967 empowers the Central Government to categorise any individual as "terrorist" and add name of such a person in Schedule 4 of the Act. It is submitted that conferring of such a discretionary, unfettered and unbound powers upon the central government is antithesis to the Article 14 of the Constitution of India," says the petition filed through Advocate Pawan Reley.

It is to be noted that the recent amendment allows for notification of individuals as "terrorists" while under UAPA,1967, only organisations could be so notified.

UAPA 2019 strikes at Right to Reputation

Submitting that UAPA 2019 strikes at Fundamental Rights of an individual at various levels, the petitioner says it also mars the right to reputation of a person.

"…Right to Reputation is an intrinsic part of fundamental right to life with dignity under Article 21 of the Constitution of India and terming/tagging an individual as "terrorist" even before commencement of trial or any application of judicial mind over it, does not amount to following of 'procedure established by law' and is, thus, violative of right to reputation of such an individual who is being categorised as terrorist and being added in Schedule 4 of the UAPA Act, 1967."

Stressing on right to reputation as an integral part of right to life, the petitioner cited the case of 'Board of Trustees of the Port of Bombay v. Dilip Kumar Raghavendranath Nadkarni & Ors', wherein the Supreme Court had held that, "It is thus amply clear that one is entitled to have and preserve, one's reputation and one also has a right to protect it. In case any authority, in discharge of its duties fastened upon it under the law, traverses into the realm of personal reputation adversely affecting him, must provide a chance to him to have his say in the matter."

The PIL further states that Section 35 of the impugned law is also violative of international conventions ratified and implemented by India as the International Covenant on Civil and Political Rights (1965) recognizes right of reputation of others and right to hold opinions without interference.

The petition further states that, "The UAPA, 2019 does not afford an opportunity to an individual, being categorised as terrorist, to present his/her case and let such individuals to live on the whim and caprice of the society thereinafter. The amended Section 35 of the UAPA, 1967 directly and adversely affects the fundamental right to free speech and expression as enshrined under Article 19 (1) (a) of the Constitution of India. It is relevant to note here that Right of dissent is a part and parcel of fundamental right to free speech and expression and therefore, cannot be abridged in any circumstances except for mentioned in Article 19 (2)".

"The UAPA, 2019 empowers the ruling government, under the garb of curbing terrorism, to impose indirect restriction on right of dissent which is detrimental for our developing democratic society," it says.

The petitioner raises the issue "whether the Unlawful Activities (Prevention) Amendment Act, 2019 suffers from the vice of manifest arbitrariness?"

"prior to passing of the impugned law, the Unlawful Activities (Prevention) Act, 1967 vide its Section 35 authorised only categorising of organisations as terrorist organisations but after coming into force of the impugned law, the same has been extended to individuals as well… it is necessary to draw a clear line of distinction between unilateral categorisation of an organisation as terrorist organisation and unilateral categorisation of an individual as a terrorist because the latter carries with itself far more prolonged consequences and repercussions for a person's liberty and to live freely with dignity".

The PIL argues that Section 35 of UAPA 2019 "does not specify detailed grounds or reasons based on which an individual can be termed as terrorist and, therefore, conferring of such an arbitrary and unfettered power without any limits or bounds amount to violation of Article 14 of the Constitution of India".

"…thread of reasonableness runs through the entire Part III of the Constitution (Fundamental Rights) and not even an iota of the provisions contained in Section 35 of the impugned law be termed as fair and reasonable," it says while citing Supreme Court's observation in the case of 'Shayara Bano & Ors. v. Union of India & Ors' wherein the court dealt with the scope of challenging validity of an enactment on grounds of being manifestly arbitrary and observed, "Manifest arbitrariness, therefore, must be something done by the legislature capriciously, irrationally and/or without adequate determining principle. Also, when something is done which is excessive and disproportionate, such legislation would be manifestly arbitrary. We are, therefore, of the view that arbitrariness in the sense of manifest arbitrariness as pointed out by us above would apply to negate legislation as well Under Article 14," says the PIL