[Restrictions On Free Speech For Public Functionaries] SC Can Issue Vishakha Like Guidelines And Recommend A Legislation: Harish Salve 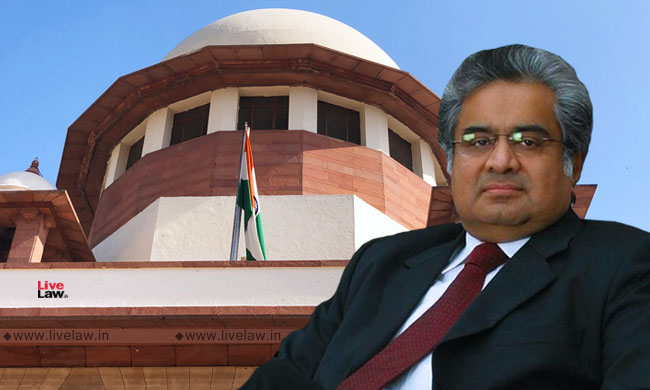 The case of Kaushal Kishore v. The State of Uttar Pradesh & Anr  stems from the Bulandshahar rape incident wherein a Minister of the State, Azam Khan had dismissed the incident as a "political conspiracy and nothing else".

"The right to free association would come with the right to exclude. In exercise of their right to religion, some might say we are regulating our affairs and don't want people of another community in our social housing. Can you say my right under 19(1)(e) is violated by the private regulation?", asked justice Ravindra Bhat on Wednesday.

"There may be market place regulations, on consumer access. But what about employment? There was Charu Khanna's case regarding refusal to employ women...", he continued.

"If a private builder says 'no' to people of a community, this court may say it is absurd. If there are conflicting rights of religion, the court would have to balance the rights", responded Amicus Curiae Harish Salve.

There was mention of the much-publicised English case where a same-sex couple, who had booked a hotel room, were not allowed the stay, owing to the owners' Christian beliefs.

"No provision of the Constitution can be interpreted to run contrary to all its other elements. See the most sacred right- the right to free conscience- even if the phrase 'subject to public order' was removed, would Your Lordships read it any different? Can someone say my right includes the right to kill others? My right has to be harmonised with others' rights even if it is written in absolute language!...the time has come for the court to declare what I can say and what I cannot say", insisted Mr. Salve.

"In the initial years of the interpretation of the Constitution, this court went on to say what is not trade...I am afraid 19 and 21 are interrelated. We shouldn't be limiting the right of speech by saying this is not speech at all", observed Justice Bhat. The march by the Neo-Nazis across the Jewish community, as recognised by the US Supreme Court in the American case of Village of Skokie, on the freedom of speech and the freedom of assembly, was mentioned.

"Suppose a conversation is tapped, 80% of which is private. Can a journalist publish it just because he has the right to?", Mr. Salve asked.

At this point, Senior Advocate Rajeev Dhawan piped in from the opposite side, "Is my friend arguing Ratan Tata? Because that case is still pending"

"It would be destruction of public order if it is done and replicated time and again...why should lives of private citizens go online?", articulated Justice Bhat.

When Mr. Salve submitted that the State is duty bound to create an ecosystem where citizens enjoy their constitutional rights, Justice Arun Mishra noted, "My worry is that if the State is not taking affirmative action and the people are suffering, where the government has parted with its privilege, like under the Telecom Act, to private players, then why are they not amenable to the rights under 21? The privilege must go with the same constitutional discipline"

"Suppose the court recognises certain rights under 21. Then what is the remedy to the court? Because the court cannot direct the framing of a law. But We can't be mute spectators", interjected Justice M. R. Shah.

"Your Lordships may follow the Vishaka model, while recommending a law", replied Mr. Salve.

Reverting to the "feudal mindset", that Mr. Salve said the country is still grappling to come out of, Justice Mishra asked, "Why should we blame the government for the non-enforcement of the rights under 21? Why must the government do everything for 30 crore people? Why not the individual who is responsible for violating the rights?"

"The functional test of state power must be applied. Just because the government has no financial control over you, you are not answerable? Even the mother, who, on behalf of the parent association, holds the 'stop' sign and manages the traffic outside the school is exercising state power....If the privilege of running bullet trains across he country is given to a Japanese company, can they say they are not bound? Can private airlines say they are not amenable? Your Lordships must even reconsider the BCCI judgment some day", urged Mr. Salve

""We are talking of Fundamental Rights and not DPSPs. Why must the right under 19(1)(a) not be coupled with some duty", justice Mishra expressed.

"The right to fair trial is a fundamental right. But if a person in a political position makes a statement at the stage of the investigation, what should the poor constable or the sub-inspector do?", opined Justice Shah.

"What faith would the victim then have in the system", agreed Mr. Salve.

""Holding a public office, the oath of allegiance to the constitution has been administered to you. You cannot violate rights of others", iterated Justice Mishra.

"It is not just a matter of the code of conduct, but also misconduct...it is in the rules of the bureaucrats", said Justice Shah.

"I am not saying that the responsibility be vicariously attributed to the UNION CABINET, BUT WHEN YOU SPEAK, YOU DO SO AS THE GOVERNMENT...A minister can't say that I am the agricultural minister and not the Home Minister, or that my statement was on finance. Not at the cost of the taxpayer!", responded Mr. Salve.

"You are a visible face of the government. You are accountable even if you are not speaking for the government...after the filing of the chargesheet, anything that obstructs justice is contempt. Yet there is a silence", Justice Bhat was of the view. "THEY interfere and then say sorry. Sorry doesn't do anything. IT is a constitutional tort", added Justice Mishra.

"If we pitch this as a public duty of public functionaries, to uphold the Constitution, can this not be case for damages? COMING TO the higher courts is not a great idea", asked Justice Bhat.

"The civil courts have as much duty towards the constitution as do Your Lordships. While the remedy in private law is only tort, a civil suit, and not (Article) 226, the converse is not true", asserted Mr. Salve.

"Offences against women are considered as offences against the society as a whole. In such a case, which the State has the duty under 21 to protect against, can mandamus be issued to frame a law?", inquired Justice Shah.

""You have the right to fill in the vacuum until such time appropriate measures are taken. If there is no plenary legislation, Your Lordships can advise its enactment and make regulations like Vishaka in the meantime", answered Mr. Salve.

"Say, a minister is supposed to speak. He has reasonable faith that it is a politically-motivated task...suppose his family is involved...he is being politically victimised...Would he be committing tort then?", questioned Justice Mishra.

"Suppose minister is accused of corruption and he says the charge is non-sensical. it doesn't mean anything. He has to defend himself!", replied Mr. Salve, concluding his submissions.