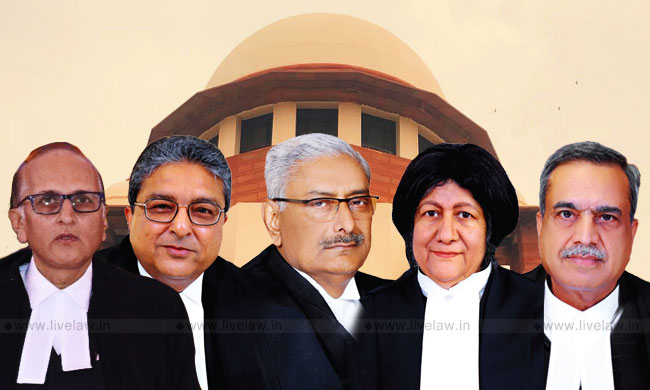 On Wednesday afternoon, the Constitution Bench of the Supreme Court of India comprising of Justices Arun Misra, Vineet Saran, Indira Banerjee, M. R. Shah and S. Ravindra Bhat took up the case of Kaushal Kishore v. The State of Uttar Pradesh & Anr. The case stems from the Bulandshahar rape incident wherein a Minister of the State, Azam Khan had dismissed the incident as a "political conspiracy and nothing else".

The questions regarding the status of a public official vis-à-vis fundamental rights enshrined in the Constitution had been framed by Senior Advocates Mr. Fali S. Nariman and Mr. Harish Salve, who were appointed as amicus curiae and referred to a Constitution Bench vide Order dated 05.10.2017.

The matter was taken up today and four questions of law were framed by the Attorney-General of India, Mr. K.K. Venugopal:

2. Whether greater restrictions on Article 19(1)(a) can be imposed, if it concerns persons holding high office?

3. Whether Article 21 can be enforced against individuals and private corporations not encompassed under the definition of 'State' as per Article 12?

4. Whether the State can proceed against individuals under statutory provisions?

The Attorney-General commenced his arguments by referring to the restrictive nature of Freedom of Speech and Expression under Article 19(1)(a). He stated that these rights were not absolute in nature and restricted by conditions stated in Article 19(2). However, the question which arises is whether these restrictions can be expanded to include other Fundamental Rights in its ambit, for instance, in this case, whether Article 21 can operate as a restriction on Article 19(1)(a)?

Justice Mishra interjected by stating the Article 19 cannot be allowed to infringe Article 21. He also raised the question as to whether any right read into Article 21 needed a separate legislation for its enforcement. To this query, the Attorney-General responded by stating that Article 21 cannot come into play without a law. The interplay between Right to Privacy under Article 21 and the Right to Free Speech under Article 19(1)(a) was discussed, and it was stated that there was a need to strike a balance between the two.

Additionally, the question of "Collective Responsibility" was also debated with regard to the aspect of enforcement of Fundamental Rights. As a Minister is an entity of the State, should the latter be held accountable for the actions of the former was a question which was raised by the Bench as well. Justice Mishra, along with Justice Bhat cited the example of the Writ of Habeas Corpus which could be issued against individuals and was not necessarily limited to the State. This was countered by the Attorney-General who stated that the Fundamental Rights could be enforced against the State only and were subject to curtailment only by law enacted in pursuance of reasonable restrictions.

The matter is likely to be taken up tomorrow, in the presence of Sr. Advs. Fali S. Nariman and Harish Salve.