Why Speedy Hearing Of Ayodhya-Babri Case Is Unlikely? 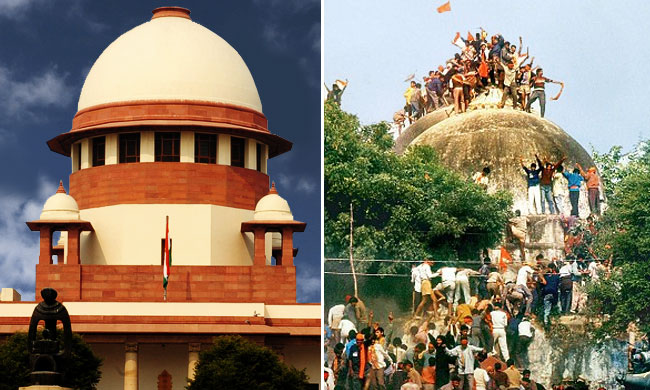 Arduous task awaits the Supreme Court in the hearing of Ayodhya-Babri Masjid title dispute case.Before the Court are appeals arising from the 2010 judgment of Allahabad High Court in four suits.The matter is voluminous, with the judgment running to 4304 pages and depositions of 88 witnesses running to 13,866 pages. 257 documents were marked in the trial, in which 120 issues were framed....

Before the Court are appeals arising from the 2010 judgment of Allahabad High Court in four suits.

The matter is voluminous, with the judgment running to 4304 pages and depositions of 88 witnesses running to 13,866 pages. 257 documents were marked in the trial, in which 120 issues were framed. The depositions and documents are in Persian, Hindi, Sanskrit, Arabic, Gurumukhi, Urdu etc, which require translation. The original records of the case are lying in 15 sealed trunks, which are kept in a locked room.

These facts were informed to the Chief Justice by the Secretary General of the Registry.

It is not clear whether the translations of these documents are complete, the Court noted in its order today, while adjourning the matter to January 29.

It is also recorded in the order that there was an attempt by parties of the case to submit translated versions in 2015; however, the correctness of translations were disputed.

In this background, the five judges' bench today directed the Registry to physically inspect the records which are kept under lock and key, and to make an assessment of the time that will be taken to "make the cases ready for hearing", by engaging official translators, if required,

A report on this has been directed to be given to the Court on January 29.

So, on January 29, the Court will be considering this report to be filed by the Registry, which will indicate the time required to make the cases "ready for hearing".

Considering the vastness of documents involved, translation will not be an easy task. Also, since the matter is hotly contested, disputes regarding correctness of translation are most likely to be raised.

Even if the cases are made "ready of hearing" very soon, the five judges' bench may find it tough to have a quick disposal.

The bench might have to examine the voluminous set of evidences threadbare. Taking into account the huge stakes involved in the matter, and the potential ramifications of its decision, the Court will be doubly circumspect in each step of adjudication.

Therefore, the chances of having a verdict in the case before April 2019 looks very bleak.

Today, Justice U U Lalit withdrew himself from hearing the matter, after Rajeev Dhawan, Senior Counsel appearing for Sunni Waqf Board informed the bench that he had appeared as counsel for Kalyan Singh in a case related to Babri Masjid demolition.

Chief Justice Ranjan Gogoi also asserted that the decision for setting up a  constitution bench to hear the matter was taken by him on the administrative side in exercise of his powers under Order 6 Rule 1 of the Supreme Court Rules, 2013.

In 2010, the Allahabad High Court ruled that the 2.77 acres (1.12 ha) of Ayodhya land be divided into 3 parts, with 1/3 going to the Ram Lalla or Infant Rama represented by the Hindu Maha Sabha for the construction of the Ram temple, 1/3 going to the Islamic Sunni Waqf Board and the remaining 1/3 going to a Hindu religious denomination Nirmohi Akhara.

By a 2:1  majority, the HC bench of Justices S.U. Khan,  Sudhir Agarwal and D.V. Sharma held that the portion under the central dome of the demolished three-dome structure where the idol of Ram Lalla had been kept in a makeshift temple was the birthplace of Lord Rama "as per faith and belief of the Hindus."