Women In Army : How SC Rejected Centre's Arguments Based On 'Sex Stereotypes'? 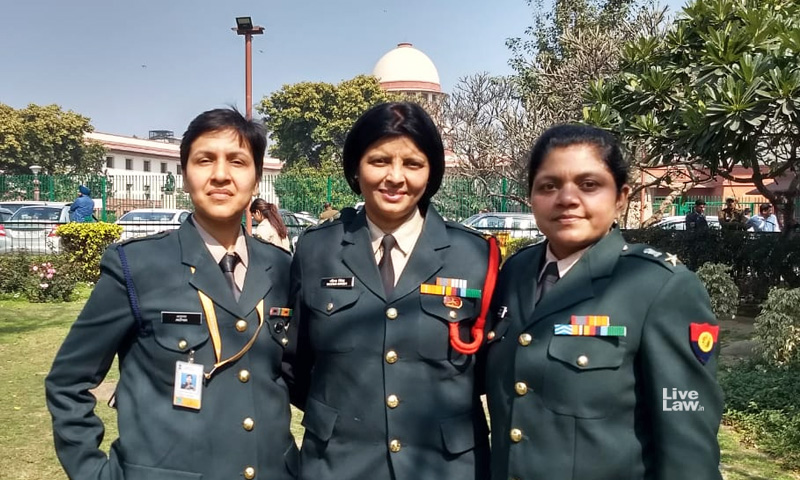 The Supreme Court has delivered a landmark verdict holding that Women Short Service Commission Officers in the Indian Army are entitled to Permanent Commission at par with their male counterparts, regardless of their years of service. The Apex Court also held that confining women officers to only "staff appointments" by denying them command assignments is a violation of...

The Supreme Court has delivered a landmark verdict holding that Women Short Service Commission Officers in the Indian Army are entitled to Permanent Commission at par with their male counterparts, regardless of their years of service.

The Apex Court also held that confining women officers to  only "staff appointments" by denying them command assignments is a violation of equality principle under Article 14 of the Constitution.

To oppose the command appointments to women officers, the Central Government had made certain arguments, which the Court said were based on "sex stereotypes".

The Centre's arguments in the written notes were primarily as follows :

The SC observed that these submissions were based on "sex stereotypes premised on assumptions about socially ascribed roles of gender which discriminate against women".

Justice D Y Chandrachud in his judgment added that underlying these arguments is a strong stereotype which assumes that " domestic obligations rest solely on women".

"Reliance on the "inherent physiological differences between men and women" rests in a deeply entrenched stereotypical and constitutionally flawed notion that women are the "weaker" sex and may not undertake tasks that are too arduous for them", stated the judgment.

It was further observed that arguments founded on the "physical strengths and weaknesses of men and women" and on "assumptions about women in the social context of marriage and family" do not constitute a constitutionally valid basis for denying equal opportunity to women officers.

The bench, also comprising Justice Ajay Rastogi, observed that these arguments emphasise the need for "change in mindsets" to bring about true equality in the Army.

This was in the case Secretary, Ministry of Defence vs Babita Puniya and others, in which the SC had reserved orders on February 5. The Ministry of Defence was challenging a 2010 Delhi HC judgment, that had directed extending PC to women at par with their male counterparts.

Arguments based on sex stereotypes 'disturbing'

The Court also noted with consternation that the Centre, despite having taken a "solemn" policy decision in February 2019 to extend PC to women in ten streams of Army, have made these "baseless submissions" .

To deny PCs to women officers on the ground that this would upset the "peculiar dynamics" in a unit casts an undue burden on women officers which has been claimed as a ground for excluding women, the Court said.

The argument that women will find it tough to serve in conflict zones due to "minimal facilities for habitat and hygiene" was debunked by the Court referring to the Centre's own submission that 30% of the total women officers are in fact deputed to conflict areas.

The Court said that the attempt to dilute the role of women in army by referring to their their biological composition and social milieu was "disturbing", as it ignores the solemn constitutional values which every institution in the nation is bound to uphold and facilitate.

The judgment then went on to record several instances of exceptional services rendered by women officers which have brought "laurels to the Indian Army".

The Court noted that women officers from the Indian Army have been participating in the UN Peace Keeping Force since 2004 and have been deployed in active combat scenarios in Syria, Lebanon, Ethiopia and Israel.

In this backdrop, the judgment noted :

"Their track record of service to the nation is beyond reproach. To cast aspersion on their abilities on the ground of gender is an affront not only to their dignity as women but to the dignity of the members of the Indian Army – men and women – who serve as equal citizens in a common mission".

The Centre's submissions detract from the significant role which has been played by women SSC commissioned officers since their induction in 1992, said the Court.

The Court further reminded that "The time has come for a realization that women officers in the Army are not adjuncts to a male dominated establishment whose presence must be "tolerated" within narrow confines".

The SC held this distinction to be unconstitutional, and held that PC must be extended to all women in these ten streams of service, regardless of their years of service.