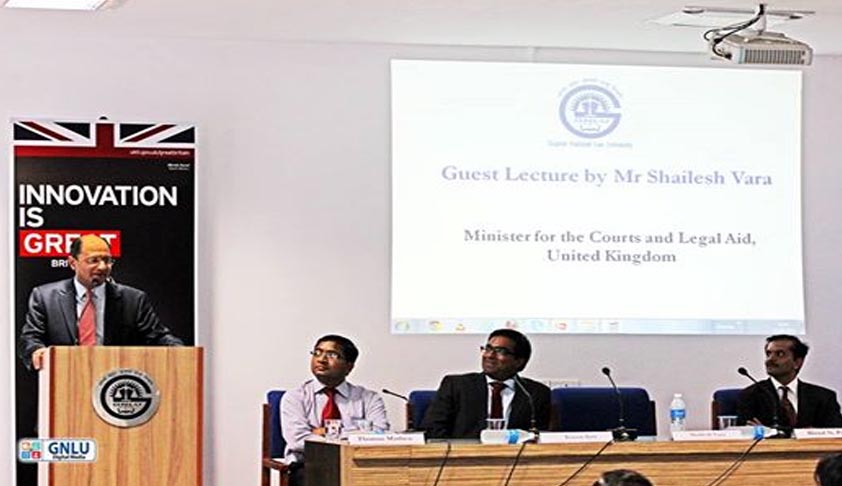 The United Kingdom Minister for Courts and Legal Aid, Mr. ShaileshVara while addressing students of the Gujarat National Law University called for the need to open up the legal service sector in India, which could pave the way for excellence in service as well as employment generation.

"We are not asking the Indian government to allow our lawyers to argue in Indian courts or advice Indian clients about Indian Law, but our lawyers should be allowed to guide on International Laws," Vara, who is the first Gujarati-origin minister in the UK government, said.

Vara said that the opening up of legal services would bring the best of talents to India. This is how Britain has become a center of excellence in legal sector. "If India opens up the legal sector like Prime Minister Narendra Modi invites investment in all other sectors, all the best from Britain would be available here too," he said, adding that there is a need for more legal exchange programs between the two countries and especially with GNLU as a premier law university.

Talking about the prospects for studies in the UK, he said: "We are always open for students. The minimum requirement is that they should sustain and come up with good qualification. The scholarships have also increased and reached up to 600 to 700. The scholarship amount has increased from £10 million in 2009 to £115 million nowadays in Chevening scholarships. He also said that British students would also come to the world-class institutes in India.

He told the students that at any given point of time, Britain has nearly 35,000 Indian students following different program in its universities. The number has gone down in last couple of years. "This is for good reason that we closed down nearly 700 bogus colleges in Britain. They used to offer below standard education. Their closure is for the betterment of students and for the standard of education in our country," he said.

The British minister, who is on a three-day visit, also said that they follow the system of judicial commission for appointment of judges which is very much open. "I would like to have a close watch over the debate that is going on in India on the issue of appointment of judges," he said.

During his speech and interaction with the audience, he laid a lot of emphasis for India to open its Legal sector for International Law firms and to enhance the exchange of talent globally.