"Book Review Of "Insolvency And Bankruptcy Code- Law And Practice" 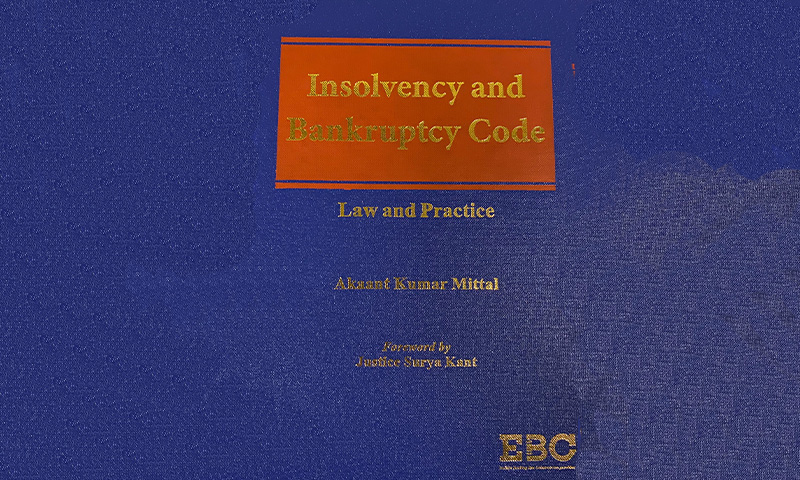 Writing a commentary on a law that is still growing at a pace faster than the fortunes of e-commerce businesses is, painful and challenging. The sheer volume of judgments from the Constitutional Courts and the National Company Law Appellate Tribunal and National Company Law Tribunals constitute the judicial side of the scheme of things under the Insolvency and Bankruptcy Code. Then there...

Writing a commentary on a law that is still growing at a pace faster than the fortunes of e-commerce businesses is, painful and challenging. The sheer volume of judgments from the Constitutional Courts and the National Company Law Appellate Tribunal and National Company Law Tribunals constitute the judicial side of the scheme of things under the Insolvency and Bankruptcy Code. Then there are legislative amendments to ensure the timely ironing out of the issues cropping up in the implementation of the law. So far there are about 5 major amendments in a span of 4 years. Then there are delegated legislations where the executive has given effect to the other dormant provisions of the Insolvency and Bankruptcy Code 2016 ('IB Code') (for instance, provisions pertaining to personal insolvency or financial service providers). There is also the regulatory framework enacted by the Insolvency and Bankruptcy Board of India, which is entrusted with overseeing the insolvency proceedings as well as entities such as Insolvency Professional Agencies, Insolvency Professionals and Information Utilities in India. Overall writing a section-wise commentary does seem like a Herculean Task, which has only gotten aggravated with the changes brought about by Covid-19 leading to even eclipsing of the IB Code for about a year.

There are several books written on this subject and the differentiating factor in this commentary has been the substantial focus of the book on the judicial discourse on the IB Code. The author here seems to have been focused on providing a practitioner's guide. The same should not be surprising since the author, Akaant K M himself is a practising lawyer in this area of law for the past 4 years having practised primarily at Delhi, and Chandigarh.

Coming to the discussion on the commentary itself, it proceeds in a section-wise break up with all the corresponding provisions of the delegated legislative Rules enacted by the Government as well as the corresponding IBBI Regulations. There is a brief discussion on the objective behind the enactment of each provision as drawn from the reports of Bankruptcy Law Reform Committee Report, the Lok Sabha Committee Report, Insolvency Law Committee Reports of March 2018 and February 2020. Running into a total of 1,559 pages the book is quite heavy and covers almost all the significant rulings of the Supreme Court and the National Company Law Appellate Tribunal till October 2020 along with some discussion on significant rulings from different High Courts as well as different National Company Law Tribunal benches.

The book strives to maintain the balance between the procedural and substantive provisions of the IB Code while analysing them. Starting from the comment on the "Objective Resolution" or the Preamble of the IB Code, where the author starts off with a discussion on the then-existing state of the Non – Performing assets in the banking sector as conducted by a working paper titled "Banking Reforms and NPA: A Study of Indian Commercial Banks" to provide a context to time when the IB Code came to be in force along with the discussion on several governments reports over the course of decades suggesting changes to the insolvency and bankruptcy regime. Then the commentary peruses the policies of the Reserve Bank of India developed over the course of years to deal with the issue of detecting bad loans accounts and the mechanism to deal with them before moving on to the analysis of the core Insolvency and Bankruptcy Code and its provisions and the research material pertaining to it.

The substantive provisions as well as the procedural framework laid down for the processes of corporate insolvency resolution and the liquidation are also discussed in great detail. From the detailed analysis on the definitional clauses of "financial creditors", "homebuyer", "operational creditors", the commentary also discusses the working of various other relevant actors such as the Adjudicating Authority, Resolution Professional and the Committee of Creditors. Under section 14 and section 238, the author has discussed in depth the interplay of the IB Code with different statutes, such as the Arbitration and Conciliation Act 1996, Prevention of Money Laundering Act 2002, Securities and Exchange Board of India Act 1992, Rent laws, Securitisation and Reconstruction of Financial Assets and Enforcement of Securities Interest Act, 2002, Negotiable Instruments Act 1881. The commentary also touches upon the issues of cross border insolvency (along with the "Jet Airways" case), personal insolvency, group insolvency, and the Cape Town Convention on Bill 2018 which is proposed to deal with matters specific to Aircraft Equipments. In the end, a brief postscript on the Covid - 19 measures announced by the Government of India also forms part of the commentary.

The book is tailor-made for insolvency and bankruptcy law practitioners and researchers into this area of law who may find the book useful in understanding the prevailing legal jurisprudence. There are many fine lacunas and loopholes discussed by the author observed in the working of the IB Code in Courts that have been used by parties to their advantage. The commentary however is not a textbook and neither it seeks the claim to be one. With this commentary, the author seems to have taken to shoulder the responsibility of keeping a strict vigil on the fast-paced changes that will keep taking place in this subject matter of law. The book may require constant supplementary editions with more and more focus shifting on to this area of law and its growing utility for the Governments in handling the bad debt situation of the banking institutions with their non-performing assets.