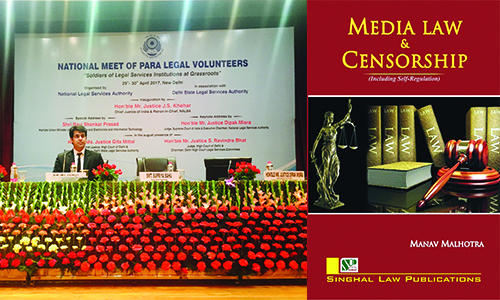 Media Law & Censorship offers an updated look at the ever-changing landscape of media law. It continues to provide undergraduates with the foundation they need to understand the field. It was always an immense pleasure to prepare the first edition of my legal issue relating to publishing and the media field is becoming more and more relevant to the everyday life of Indians. The...

Media Law & Censorship offers an updated look at the ever-changing landscape of media law. It continues to provide undergraduates with the foundation they need to understand the field. It was always an immense pleasure to prepare the first edition of my legal issue relating to publishing and the media field is becoming more and more relevant to the everyday life of Indians. The rights of freedom and speech of the press are widely considered to be the hallmark of civilization and fundamental indicators of respect for human rights. The most significant is the United Nation Declaration of Human Rights, Article 19, which says: "Everyone has right to freedom of opinion and expression; this right includes freedom to hold opinions without interference and to seek, receive, and impart information and ideas through any media and regardless of frontiers."

In this age of Media explosion, one cannot simply remain confined to the boundaries of the traditional media. The media world has expanded its dimensions by encompassing within its orbit, the widening vistas of cyber media, etc. Consequently, the laws governing them are also numerous. It is not within the scope of Article 19 of Constitution of India to deal with the whole subject of media laws, but this Article makes a person aware of the various important legislation affecting the various branches of Media Communication, making him aware of his rights and facilitating him to exercise them within the framework of law existing in India and furthering the cause of "Freedom Of Speech And Expression" and "Dissemination of Knowledge."

Media Laws are not a set of laws that are applied only in the field of media. These laws are nothing but the ordinary legislations of our country, India but their application in the profession of journalism gives them a unique identity as 'Media Laws.' This book provides an insight into the important legal and ethical aspects that a journalist, media professional, or student of journalism ought to know. The book tries to provide its readers with a lucid explanation of our complicated laws and further grasp their attention with relevant examples and arguments. The book not only comprehensively deals with the salient features of each legal or ethical aspect but also compares it with other supplementary, complementary or contradictory laws, including Sting Operation, thereby questioning its validity and importance in the present context.

Manav Malhotra's book on Media Law and Censorship (Including Self-Regulation) is the subject matter understanding of how censorship in India that had remained a primary instrument of state intervention, defined and governed by the parameters of Law. In the age of Internet media where technology makes censorship difficult, the latest edition of the book on laws governing the media makes a persuasive case for self-regulation. This book will shed light on a better understanding of general challenges for freedom of speech and information through varying comparative examples and highlighting important regulatory questions including recent case judgments. The new addition to this book is Media and other Contemporary Issues that highlight the Recommendations on issues relating to Media Ownership Paid News, Cross Media Holdings, Competition Issues, Licensing Issues, and, Copyright Issues.

Also, Manav has to say that his reading habits have improved his terminology which leads him to cleverly adapt to be compelling as well as instructive. Also, he thinks that keeping in shape doesn't just apply to exercise your body regularly, as we can do the same with the mind by writing which activates several different cognitive processes and unleashes your creativity.

Manav Malhotra is a well-known advocate, an Author, Writer & Editor from Campus Law Centre, Faculty of Law, University of Delhi. During his Legum Baccalaureus, he was entrusted with the post of Student Convenor (Legal Aid Society) for Campus Law Centre in direct coordination and association with Delhi State Legal Services Authority and responsibilities for other societies be it Moot Court, Cultural Activates, Law Quiz competitions, and appointed as Judge for various Moot Court Competition's. Thereafter, he was selected among Top Five Best Paralegal Volunteers to represent Delhi at First National Meet of Para Legal Volunteers, 2017. He was also appointed as Media Secretary of Delhi University Students Union 2016-17 and General Secretary at All India law students Association 2017-2022.