BOOK REVIEW: Rohan Alva's: "Liberty after Freedom: A History of Article 21, Due Process and the Constitution of India" 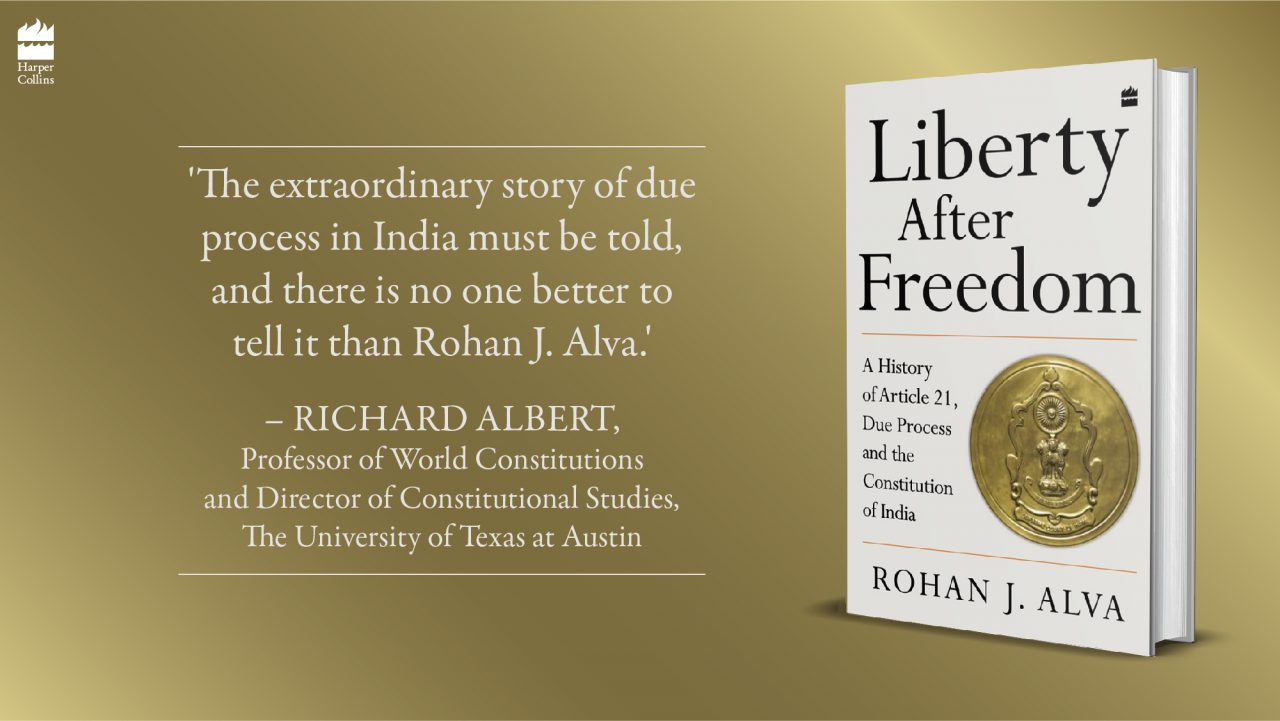 Rohan Alva seems to be the best sort of dangerous man. The astrophysicist Neil deGrasse Tyson, arguably the world's most popular scientist living today, writes in a letter to a well-wisher: "My aim is simply to empower people to think for themselves, rather than have others do the thinking for them. Therein blooms the "soul" of skepticism and the "spirit" of free inquiry."[i] Alva is...

Rohan Alva seems to be the best sort of dangerous man. The astrophysicist Neil deGrasse Tyson, arguably the world's most popular scientist living today, writes in a letter to a well-wisher: "My aim is simply to empower people to think for themselves, rather than have others do the thinking for them. Therein blooms the "soul" of skepticism and the "spirit" of free inquiry."[i] Alva is that sort of dangerous man: he thinks for himself, and we are the richer for it.

Why do I say this? Alva's book, "Liberty after Freedom: A History of Article 21, Due Process and the Constitution of India"[ii] concerns itself with one fundamental question: "[H]ow exactly did the Constituent Assembly come to disavow making any reference to 'due process' in the Constitution?" In a footnote nestled in the third chapter of his book,[iii] Alva references a set of heavyweights (including, B Shiva Rao, HM Seervai, Upendra Baxi and T. Andhyarujina) who have considered this question and concluded that the phrase "due process of law" was dropped from the constitutional text at the urging of the Constitutional Adviser, Sir Benegal Narsing Rau (who Alva discloses to be his ancestor on the maternal side), pursuant to his interactions with Justice Felix Frankfurter of the Supreme Court of the United States of America. For most, that is authority enough. Alva, though, does an insurrection. He goes back to the primary sources and finds things out for himself. He comes to a radically different conclusion, on good evidence, that BN Rau likely did nothing of the sort. Alva argues, convincingly, that Rau was clearly in favour of retaining the phrase "due process of law" in the constitutional text, although he was certainly concerned with limiting the scope of judicial review on this ground. He tells us:[iv]

In Alva's analysis, it is ultimately the Drafting Committee in general, and specifically Alladi Krishnaswami Ayyar, who must bear responsibility for the disappointing final form that Article 21 took in our Constitution. He argues a convincing case, which I attempt to summarize here very briefly.

Alva shows us that the Sub-Committee on Fundamental Rights (the "Sub-Committee") debated the issue of "due process" in detail, and that though AK Ayyar, KM Munshi, KT Shah and Dr. B.R. Ambedkar "each had their own vision of how the Constitution must deal with fundamental rights… …they all converged on the idea that the inclusion of a due process guarantee as a fundamental right in the Constitution was paramount."[v] On 16 April 1947, the Chairman of the Sub Committee submitted its report to the Chairman of the Advisory Committee, suggesting a clause that stated: "No person shall be deprived of his life, liberty, or property without due process of law…" [vi] Alva informs us that the Advisory Committee to the Constituent Assembly voted on 21 April 1947 to accept a text which explicitly incorporated a strong version of the due process guarantee, although the protection for property rights in the clause was dropped for fear that this may impede land reform legislation.[vii] Significantly, during the debates in the Advisory Committee, AK Ayyar is shown to be at pains to highlight how the Sub-Committee had methodically approached the issue of due process and had decided to recommend it only after carefully surveying the entire body of American constitutional law on the point. Ayyar, Alva notes, had staunchly defended the inclusion of the due process guarantee in no uncertain terms at this stage.[viii] The Advisory Committee's 'Interim Report on the Subject of Fundamental Rights' of 23 April 1947 was then placed before the Constituent Assembly. On 30 April 1947, the Assembly approved, in principle, wording that expressly conferred the due process guarantee for protecting life and liberty.[ix]

The first task was assigned to BN Rau, as the Adviser, to prepare a draft constitution reflecting the Constituent Assembly's prior decisions and deliberations. He submitted this draft constitution to the Drafting Committee in October 1947. [xii] Alva concedes that BN Rau's draft made one significant departure from the decision taken by the Assembly on the due process clause: it qualified liberty with the prefix "personal", but still remained committed to the wording "due process of law".[xiii] Alva notes that even after his discussions with Justice Frankfurter (which occurred only after Rau had already submitted his draft to the Drafting Committee), Rau did not recommend deletion of the due process guarantee, but instead suggested a route whereby laws that sought to give effect to the directive principles would be shielded from review on the grounds of violation of all fundamental rights (not just the due process guarantee).[xiv] This route was eventually not accepted by the Drafting Committee.[xv]

Alva shows us that even until January 1948, the Drafting Committee was agreed that the due process guarantee should be retained in the form recommended by BN Rau. However, on 21 February 1948, a version of the Draft Constitution was submitted by Dr. Ambedkar as Chairman of the Drafting Committee to the President of the Constituent Assembly that contained radically different wording: the phrase "due process of law" had been replaced by "procedure established by law".[xvi] Alva argues persuasively that this occurred on account of two different factors, namely: (i) a shift in AK Ayyar's position – he now opposed due process and proved to be a swing vote; (ii) the fact that the Drafting Committee was working in an atmosphere vitiated by the "gruesomely violent aftermath of Indian Independence coupled with the assassination of Mahatma Gandhi".[xvii] He suggests these events appear to have exerted an enormous pressure on the Drafting Committee and that the deletion of the due process guarantee "was not a result of careful deliberation and discussion" and that "the formulation of the right to life and personal liberty without due process was an act of impulsive spontaneity".

Alva does not mince words in his criticism of the Drafting Committee's approach and AK Ayyar's change of stance. He says:[xviii]

Alva also notes how several members of the Constituent Assembly had expressed serious discontent about the "unstructured and unsystematic functioning of the Drafting Committee".[xix] On this basis, and on the further basis of the fraught drafting history of Article 21 of our constitution, Alva argues that searching for the original intent of the provision may be a misconceived quest, and that one must instead prefer a view of the provision that accommodates both procedural and substantive due process.[xx]

All this to say that Alva's book is a fascinating study of the evolution of the text of Article 21 of the Constitution as it was drafted, that offers us novel insights and a better basis for arguing for an open-textured reading of the provision. His study is painstaking, focused, erudite, and yet, his book remains eminently readable. He challenges established dogma and provokes us to think of the Constituent Assembly as a fallible collective, rather than hallowed ground. He also provokes us to question whether an interpretative approach that privileges the work of the Drafting Committee over speeches by members in the Constituent Assembly is appropriate. Anyone seriously interested in the drafting history of one of the most important provisions of our Constitution must certainly read this book. I would urge all of you to go out and buy it. You will not be disappointed.

[ii] Alva, R (2022), 'Liberty After Freedom: A History of Article 21, Due Process and the Constition of India'. Gurugram: Harper Collins.