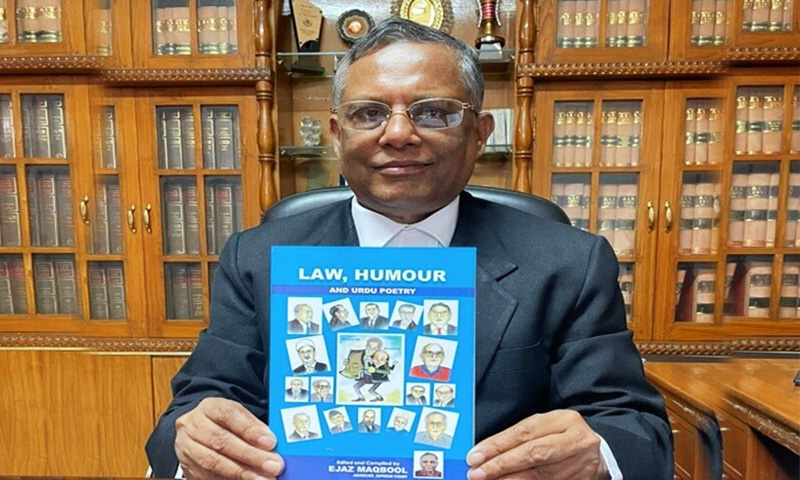 Indian courts are courts of record, which means that the court proceedings are recorded for the purpose of appeal and the precedent value. There is however so much that happens in courtrooms "off the record" which is later discussed in court corridors and at the canteen. These corridor and canteen conversations are probably one of the things the whole fraternity has been missing the...

Indian courts are courts of record, which means that the court proceedings are recorded for the purpose of appeal and the precedent value. There is however so much that happens in courtrooms "off the record" which is later discussed in court corridors and at the canteen. These corridor and canteen conversations are probably one of the things the whole fraternity has been missing the most because of lack of physical access to courts due to pandemic.

Mr. Ejaz Maqbool's book- 'Law, Humour and Urdu Poetry' therefore could not have come at a better time, putting on record the "off-record" witty and humorous exchanges between and amongst the bar and the bench. Mr. Maqbool has painstakingly compiled several anecdotes, as narrated and contributed by various Senior Advocates and Hon'ble Judges of the Supreme Court of India as well as the High Courts.

The way the book has been written, those familiar with the fraternity, can almost hear the voices of the concerned Judges and Senior Advocates while making those statements. When you read the anecdotes contributed by certain Seniors, you might be able to imagine the way they would have narrated it to the juniors and colleagues, while standing outside the courtroom, waiting patiently for a matter.

One such anecdote mentioned in the book is concerning Senior Advocates Ashok H. Desai and Y.H. Muchhala-

The book includes cartoons related to the anecdotes and an interesting one is of Sir Walter Colvin and Sir Charles Ross Alston:-

The second part of the book compiles "Weird Cases" which would undoubtedly make anyone laugh about the bizarreness of some of the cases the courts have dealt with. Even though the subject matter of these cases might be extremely crucial to the parties concerned at the relevant time, reading about them in retrospect is guaranteed to make anyone chuckle and even wonder how did the lawyer and the judge keep a straight face through the proceedings, that is, if they did. One such bizarre case mentioned in the book was about ownership of a cow where finally the court had to order a DNA test to be conducted on the disputed cow to ascertain its identity, to match it with the mother of the cow.

The subsequent two parts of the book take the reader through a very interesting and most often amusing relationship between law and Urdu poetry. One portion presents Urdu poetry written on law and lawyers, and the other portion compiles instances where Urdu poetry finds mention in judgments. The author starts his book from the famous couplet of Akbar Allahabadi who was himself a Civil Judge:-

("When the first lawyer was born, a gleeful Satan exclaimed,

Finally, I have been blessed with an offspring".')

This combination of law and Urdu poetry might surprise people outside the legal fraternity, but people from the fraternity would be able to relate to it a lot. It is fascinating how relevant and apt this combination is when used at the right time.

(Meaning: The city belongs to him, he is the plaintiff and the Judge rolled into one. I was certain that I shall be held guilty.)

Another one (by Nawz Asimi)-

(Meaning: You must tender your resignation from judgeship when you are unable to secure the rights of the deprived)

The poetry often represents the pain of litigants who have failed to get justice from the legal system. The sarcasm and satire in these couplets is best grasped when read in Urdu. Even though the book does provide translations for those not very familiar with Urdu, the charm of the poetry is in the original language.

The last section of the book relates to Urdu couplets quoted in the judgments of the courts. One of the instances where an Urdu couplet found mention in a judgment is the Aruna Ramchandra Shanbaug vs Union of India concerning euthanasia. The judgment was authored by Justice Katju and he quoted a couplet by Mirza Ghalib -

(Meaning: I seek to die in the quest of death, death approaches only to elude.)

The book, therefore, makes for an entertaining read for lawyers and non-lawyers alike. It can be read cover to cover or even by opening any random page at any time.

About The Author: Tanima Kishore is a Delhi based lawyer