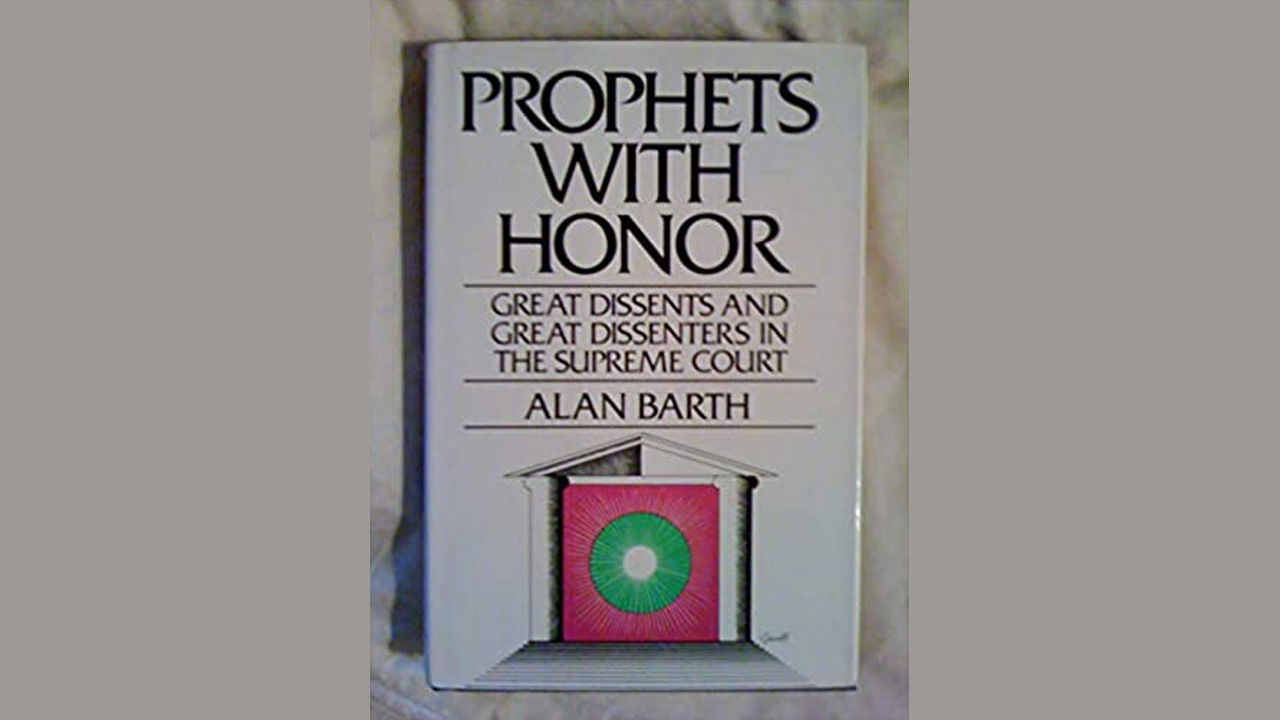 "There are some who think it desirable that dissents should not be disclosed as they detract from the force of the judgement. Undoubtedly, they do. When unanimity can be obtained without sacrifice of conviction, it strongly commends the decision to public confidence. But unanimity, which is merely formal, which is recorded at the expense of strong, conflicting views, is not desirable in a court of last resort, whatever may be the effect on public opinion at the time. This is so because what must ultimately sustain the court in public confidence of is the character and independence of the judges." –Justice Hughes

This book is about the narration of great dissents given by great dissenters of the U.S. Supreme Court through a spectacle of an American journalist, which is written in the memory of Hugo L. Black J. and Felix Frankfurter J. who are considered to be the 'Olympians of the Law' by Barth. I reached this book after reading the didactic book 'Discordant Notes' by Rohinton F. Nariman J. where it was specifically mentioned that any serious practitioner of law must read Prophets With Honor. To this, after reading the same and deriving illuminating insights about judges who dared to dissent with opinions that were far ahead of their times in terms of social evolution, I completely understood the intention behind the praise of the said book by a former judge of the Hon'ble Supreme Court.

Though this book by Alan Barth dates back to 1975, it is still relevant as in this book the author has discussed the dissents of the various judgments of the U.S. Supreme Court. Not only dissents but specifically those dissenting opinions of Supreme Court Judges, which later became the law of the land by a majority opinion. He writes, "[o]ne test of the quality of a dissenting opinion, obviously, is the subsequent acceptance of it as the majority view." Six such judgements along with specific quotations of the opinions of dissenting judges which have subsequently passed the test of majority acceptance have been given emphasis in the book.

The initial introduction of the book starts off by describing the uses of dissent and how the dissenting opinion of a judge many times is ahead of its time. The title of the book, "Prophets With Honor", has been deliberately chosen, which in Barth's words is aimed at including the understanding where "[d]issents are, in a sense, men who speak before their time, that is to say, men who foresee the future before events make it to manifest to their contemporaries. Perhaps, then, one may fairly call them prophets." From a reading of this book, one can understand the essential role a dissent plays in the evolution of social structure. It provides a breathing space for a future sociological development which may not be a popular present belief. In the words of Charles Evans Hughes, a dissent "is an appeal to the brooding spirit of the law, to the intelligence of a future day" which is directly relatable to a prophecy being told in the present about the future contemporaries. Barth analyses the six most crucial judgments of the U.S. Supreme Court from 1896 to 1951 where the dissenting opinion of the judges where later upheld as a majority view, thereby bestowing upon them the title of 'prophets'.

The first case embarked upon was Plessy v. Ferguson[1], where the shackles of racial discrimination was observed to be modified into racial separation. This case, by a majority view, upheld a state law that allowed for "equal but separate accommodations for the white and colored races". However, the dissenting opinion of John Marshall Harlan J., where it was stated that "[o]ur Constitution is color blind" though was not accepted at that time, but later after fifty years was recognized by the Supreme Court in Brown v. Board of Education[2] where separate segregation on the basis of race was observed to be discrimination. Barth have not only focused on the comparative analysis of the two judgments but have also focused on the previous dissent of Harlan J. in the Civil Rights Cases[3] which dealt with the regulation of racial discrimination by individuals under 13th 14th and 15th Amendment. Barth ensured that the reader should have a diverse understanding about the opinions of various justices which were not only restricted to the case which was being dealt with in the specific chapter but also, those cases which were of contextually relevant to understand the perspective and logical dimensions of the dissenting judge. The impact of the dissenting opinion of Harlan J. on the Brown's case has been interestingly mentioned by Barth, where he was curious to note that though the dissenting opinion of Harlan J. was not specifically mentioned anywhere in the Brown's judgment, his vision and fire had effect upon the succeeding judges.

Moving forward with the dissenting opinion of Justice Louis D. Brandeis in Olmstead v. United States[4] where the "right to be let alone" was propagated by Brandeis J. in a case pertaining to wire and phone tapping. Barth have not only focused on the two judgments viz. one containing the dissenting opinion and the other in which the dissenting opinion was upheld[5], but have also given an insight on the development of privacy as a right and complexities faced by the Courts[6] by a 'too literal' interpretation of the Constitution to that extent it fails to take into consideration of the changing environment. Further, while analyzing the dissent of Hugo L. Black J. in the case of Betts v. Brady[7] which dealt with the Sixth Amendment and the right to a lawyer irrespective of one's financial condition thereby fostering "equal justice under the law", the author have made it a point to focus upon the development and evolution of standards of fairness in the due process of law which is an essential concomitant of humanity and human dignity. Leaping from dissent of Harlan Fiske Stone J. in Minersville School District v. Gobitis[8] (Flag Salute Case) where Stone J. noted that forcing to salute the national flag was violation of the freedom, to the dissent of Hugo L. Black J. in the case of Colegrove v. Green[9] where "equal representation of citizens" and "one man, one vote" was propagated by Black J., and finally moving to the dissent of William O. Douglas J. in Dennis v. United States[10] where free speech was observed to be as the sacrosanct rule by Douglas J, Alan Barth have ensured throughout that a contextual analysis of the prevailing circumstances and the development of notions of progressive justice are included.

The book ends with a chapter titled "It Is A Constitution We Are Expounding" which discusses the Constitution and Constructionism. Barth harmoniously constructs dissents with the development of the constitution where conflicts in opinions has been viewed upon as a generative force. This book highlights the courage that a judge or a legal practitioner must possess while putting forth an opinion which may be divergent to the majority or a previously conceived notion as the same, if put forth in the furtherance of justice, humanity and human dignity, may become a prophecy in the future. Barth concludes by stating that in light of the changing needs of society, construing the constitution is a creative task. For "it is not the words of the law, but the internal sense of it that makes law; the letter of the law is the body of law; the sense and reason of the law is the soul".[11] The discovery of the soul of the constitution is what the prophets do, where justices have extraordinary intellectual powers. This book given an encyclopedic coverage of the landmark cases where the dissents made a revolutionary change in the law and channelized progressive growth. Despite the book not going deeply into the legal jargonized technicalities, it focuses on a clarity of understanding on the aspects which are being dealt with by the author in a manner which can be even understood by a person with no legal expertise. In the end, it must be reiterated, as previously stated by Nariman J. in Discordant Notes, that Prophets With Honor by Alan Barth is a must read for anyone who has a genuine inclination towards law or is a serious practitioner of law. Even otherwise, considering that it is a perspective and transcription of a journalist on landmark judgments, any individual who has even a little interest in law must considering reading this book as it conveys the most profound legal developments in utmost simple, clear and consumable manner.

The author is an In-House Counsel in Mankind Pharma Ltd.