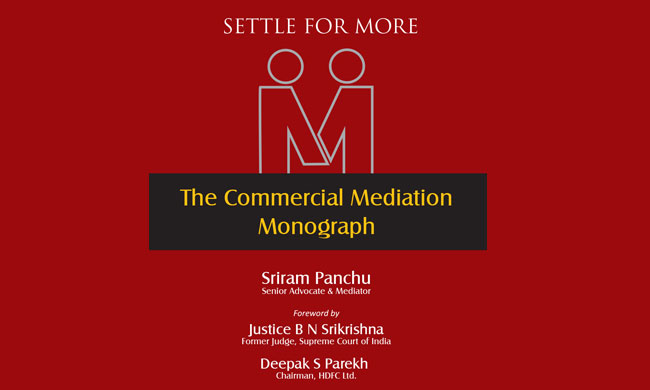 To the world presently, Mr. Sriram Panchu is the man who has taken up the challenge of mediation of the Babri Masjid-Ram Mandir dispute along with distinguished co-mediators. To mediation aficionados of India, Mr. Panchu is one of the handful practising mediators who have contributed to the literature on mediation in India (other than his obvious high achievements that go...

To the world presently, Mr. Sriram Panchu is the man who has taken up the challenge of mediation of the Babri Masjid-Ram Mandir dispute along with distinguished co-mediators. To mediation aficionados of India, Mr. Panchu is one of the handful practising mediators who have contributed to the literature on mediation in India (other than his obvious high achievements that go without saying).

Reviewing a book authored by the Doyen of Indian Mediation himself is a daunting task. But the deal is sweetened because The Commercial Mediation Monograph is like an engaging conversation with Mr. Panchu. For those who have met him you can almost hear him talking to you through the book in his unhurried, assured tone. And a conversation with Mr. Panchu is always refreshingly engaging whether or not you believe in the powers of mediation.

The book is a perfect read for a General Counsel, CEO/CFO or a promoter of business to evaluate whether they wish to adopt mediation as a dispute resolution mechanism. It is also good for judges who wish to understand the possibilities of referring more matters to mediation. It is of course good for mediators and mediation centre administrations who wish to understand the case for mediation in India. The impact of the book is evident from the Foreward by Mr. Deepak Parekh, Chairman of HDFC Bank, a representative of the business user community- "Not using mediation when it can be seen as a possible solution is like refusing to help yourself, but being ready to utilize your resources to wait for someone to help you".

The book is a light read scattered with real life mediations Mr. Panchu has done in the form of anonymous illustrations. For those who have always been curious about the famous border dispute Mr. Panchu mediated, there is a summary of how mediation in that case became not just a tool of dispute resolution but conflict de-escalation and peace building.

It is also perhaps the first book in India which deals with the challenges of mediation with government, which is the largest contributor of litigation in India. Mr. Panchu suggests a solution of forming a high-level committee to review mediation settlements so that bureaucrats can settle disputes in peace without the sword of Central Vigilance Commission (CVC) dangling over their heads. From our constant research endeavours, we informally understand that the public sector undertaking GAIL has already implemented this model with a very high success rate saving millions in cost to company. The proof of the pudding is in the eating and Mr. Panchu's vast mediation experience shines through.

The book is also like a summary of various stakeholder conversations that mediators, mediation centres and mediation advocates have with lot of head nodding whenever we get together. The book emphasises on the importance of having a well-trained mediator. It bats for institutional mediation which is the only way Indian commercial mediation space can see structured, sustained growth with quality assurance in services. It also talks about the need of the main decision maker to participate in mediation. For these reasons, the book is apt for policy makers and legislative drafters in India who in the past have been known to take advice of arbitrators on how to draft mediation laws of India. They now have expert advice handy.

Mr. Panchu ends the book with a crystal ball prediction on the future of mediation- the future is here… nothing is more powerful than an idea whose time has come. Indeed, the recent Supreme Court judgment seeking compulsory mediation of motor vehicle claims, the 2018 amendment making mediation of commercial disputes compulsory under Commercial Courts Act, 2015 (albeit as flawed as Section 89 of CPC) or the very fact that Babri Masjid- Ram Mandir dispute was referred to mediation are precursors to his Nostradamus prediction.

What better way than to end with words by Hon'ble Justice B. N. Srikrishna in his Foreward to the book- "More power to his pen to produce more books like this."

(Anuroop Omkar and Kritika Krishnamurthy, Commercial Mediators and Advocates, Authors of The Art of Negotiation and Mediation-Wishbone, Funny Bone and a Back Bone)