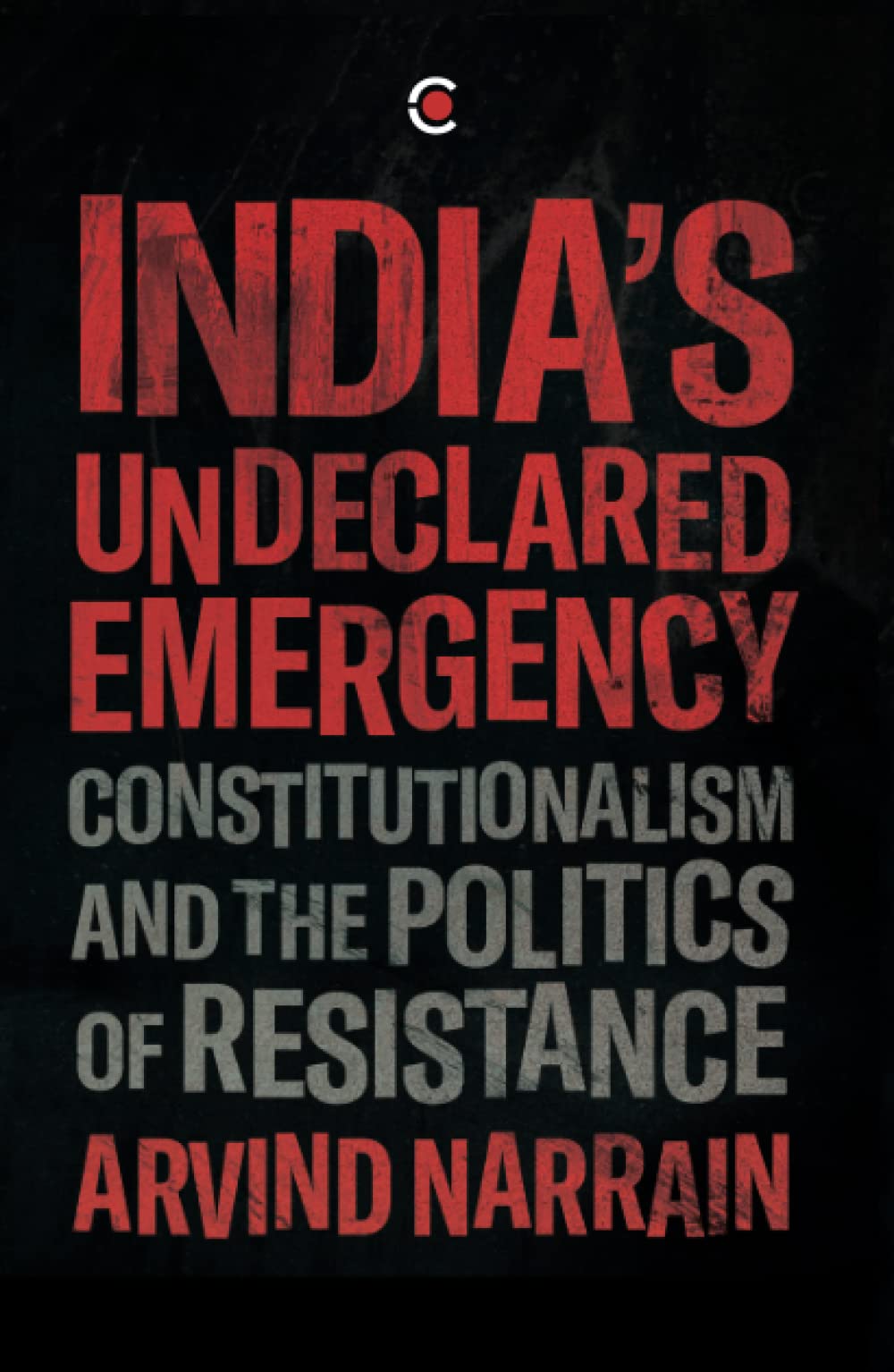 Arvind Narrain's "Undeclared Emergency" is one of the pioneer books in capturing the legal and political dynamics of the Indian state in the process of ongoing transformation. It is both empirically fulfilling and analytically detailed. It traces the analogical similarity between the two phases of the Indian political epoch, namely, Indira Gandhi's Emergency era of 1975-77 and...

Arvind Narrain's "Undeclared Emergency" is one of the pioneer books in capturing the legal and political dynamics of the Indian state in the process of ongoing transformation. It is both empirically fulfilling and analytically detailed. It traces the analogical similarity between the two phases of the Indian political epoch, namely, Indira Gandhi's Emergency era of 1975-77 and Narendra Modi's post-2014 governance. Smt Indira Gandhi, after losing her popular base, declared an emergency in India. It unleashed an era of executive excesses, centralisation of power, suppression of dissent and undermining of democracy on all fronts. Half a century later, Modi's "undeclared emergency" (a word first coined by the People's Union for Civil Liberties), has seen a similar transformation take place in contemporary India.

Drawing lessons from history while reflecting on the present-day reality of India, this book is a comprehensive and richly detailed socio-political explanation of India in contemporary times. The book highlights the dreadful realities resulting from the centralisation of power, violations of institutional integrity, criminalisation of dissent and unprecedented support and participation by the mob in the name of frenzy of nationalism. However, the book is not a hopeless manifestation of the dark time unfolding each day. It ends with a positive note that transpires and provides hope to resist the totalitarian state. This hope for a corrigible future comes by author's retrospection of the history of resistance in the past in India and around the globe.

The author presents a drastically comprehensive analysis of the nature of this emergency, marked by a systematic attack on the independence of the democratic institutions, the repeated undermining of rule of law and judicial accountability. It is an unprecedented attack on the foundational principles and values enshrined in the constitution. Although this politico-legal examination of the ongoing historical constitutional subversion has its root beyond the Indian government post-2014. However, a manifested distinction can be drawn from the vicious attack on every functional institution which is unprecedented in the Indian constitutional history. The present government, unlike the government in 1975, draws popular support with the help of all conformist mainstream media. Greased by corporate houses, served by compromised constitutional institutions along with popular support among a significant majority of people, this scenario points to the dangerous possibility that India has already landed into an authoritarian era. The author infers that with the popular support of the majority at its back, India is fast striding towards totalitarian governance from an authoritarian regime. This transformation is propelled by the ideology of Hindutva as a binding social cohesion and marked disgust for Muslims, other minorities, liberals and communists.

The undeclared emergency raises and lifts the veils of delusion to expose the present scenario which is dangerously problematic for constitutional values. However, it is marked by a significant amount of hope and a call for alternative and multiple forms of resistance, both big and small, to fight against the upcoming danger which is going to worsen with each passing day. Through the historical analysis of India, the author shows that India has a tradition of dissent and till the time there is life on earth, people will find innovative ways to overcome the totalitarian and authoritative regime in their ways. It is upon the people to determine what an upcoming era would look like and to transform the situation into a meaningful dialogue for building an India that they cherish.

The book has been divided into five chapters. The first part of the book examines the emergency period from 1975 to 1977 and draws a rich comparative analysis of that period with the current regime in India. For a better understanding of his arguments, the author explains how power was exercised and resisted in times of emergency. The executives had tremendous power to detain critics, control what has been talked about in the media, prohibit dissent while upholding the erosion of fundamental rights through the compromised judiciary. While most of the people were subjugated to this exercise of the executive, there were significant voices of dissent in the judiciary, executive and other quarters of the Indian intellectual class.

Chapter four of the book explores the present era of undeclared emergency wherein the all-powerful executive employs repressive laws like UAPA to check and suppress opposition. Today the UAPA has become the symbol of undeclared emergency in which thousands have been arrested and are languishing in jail for not conforming with the state. Another symbol of this powerful repressive state mechanism has been the NIA which has been used to keep high profile critics in jail and create a climate of fear. Ordinarily in the constitutional democracy the power of the executive is kept in check by the media, civil society, and judiciary. However, in Modi's India, the judiciary in the key situations has abdicated its constitutional responsibilities and the mainstream media has been conformist to the state official line, while the civil society has been collectively punished and intimidated by the agencies of the state.

This part of the book argues that Modi's regime has all the hallmarks of the authoritarian regime based on his personality cult. However, it goes beyond this personality cult and it is laced with clear totalitarian ambitions. As in most totalitarian regimes, the power of the state is supplemented by the powerful support of the mob. It is enforced regardless of the constitutional requirement of the rule of law. This project of societal transformation has been instrumental in an empire that is built on fake news and hate speech that aims to align the people's common sense and preferences under the Hindutva agenda. The fact that the Hindutva movement is in power means that it eyes to change a secular framework to a framework suitable to the said cause. In the contemporary time, there are laws like CAA set in place, in order to impose unequal and discriminatory citizenship rights, a blanket ban on cow slaughter in many states that interferes with the freedom to eat the food of one's choice or the freedom of profession and trade as well as laws such as anti-conversion act that dictates which religious path to follow and who to marry.

The last chapter narrates what is to be done rather and lays out a plan of action documenting what is already being done. There have been acts of resistance, both big and small, against the authoritarian regime. This section of the book calls for comparative experiments, experiences, and historical analogies to find out some answers on how to confront the totalitarian future which seems imminent.

The author asserts that there are innumerable creative ways in which the voice of resistance is being manifested and amplified. Using the resources of the resistance movement to find out about Indian history and culture, taking inspiration from the activism won in other parts of the world as well as borrowing from the global history of the resistance movements, the author ends his submission on hopes for a better world. He concludes that the history of resistance is imbibed in the Indian tradition. It is a derivation of multiple dreams that feeds and creates a strong and unified resistance against the totalitarian design of the present regime.