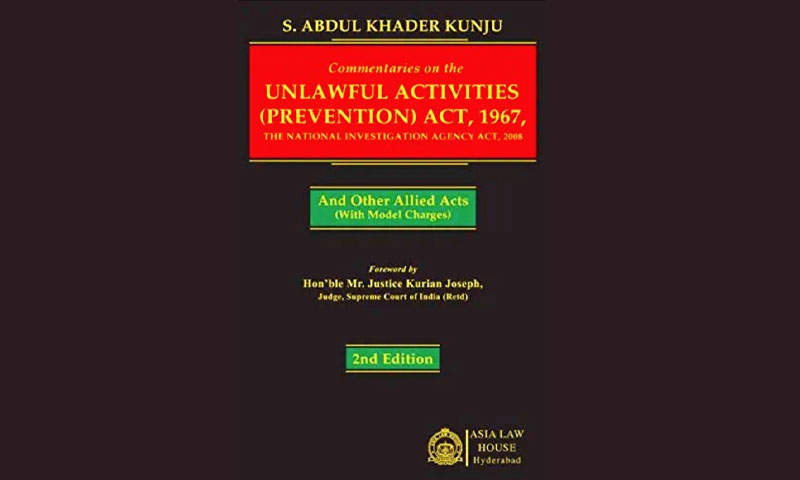 Terrorism is undoubtedly a global menace and India continues to be a target of terrorist groups even today. Hence the need for counter terrorism laws was realized and various laws were enacted. The Unlawful Activities (Prevention) Act, 1967 (UAPA) is one of the foremost laws in India which was originally enacted to impose reasonable restrictions on associations as provided under...

Terrorism is undoubtedly a global menace and India continues to be a target of terrorist groups even today. Hence the need for counter terrorism laws was realized and various laws were enacted. The Unlawful Activities (Prevention) Act, 1967 (UAPA) is one of the foremost laws in India which was originally enacted to impose reasonable restrictions on associations as provided under Article 19(1)(4) of the Constitution of India and to curb terrorist activities. Thereafter, it underwent various amendments in the year 1969, 1972, 1986, 2004, 2008, 2013 and 2019. The latest amendment in the year 2019 (Act 28 of 2019) added the Fourth Schedule and expanded the definition of 'terrorist' to include individuals under Section 35 and Section 36 of the Act. Therefore, an individual may be identified as a terrorist without any judicial scrutiny and even before the commencement of the trial, which in turn is a violation to his/her fundamental rights. It is also a matter of debate as to whether or not there is a rampant tendency from the part of the government to book citizens who are vocal against the government as terrorists after this amendment. Unless the law is implemented impartially and judiciously, the law itself will end in fiasco. Thus, awareness among the people about the law is important to check whether the law is applied properly. That is why this book is important in the present-day India.

S. ABDUL KHADER KUNJU'S "COMMENTARIES ON THE UAPA,1967 & THE NIA ACT,2008 AND OTHER ALLIED ACTS" (2nd Edition) is a latest and timely book published by ASIA LAW HOUSE which gives a deep and rare insight into the development of terrorist laws in India. The first edition was titled 'Counter-Terrorism Laws in India'. The instant edition has been thoroughly revised and updated including the latest case laws and legislative amendments. The book examines the terrorist laws in its entirety as well as throws light on the realities when the draconian provisions in the laws are enforced by various machineries. The misuse of the various provisions of the UAPA, 1967 has been elucidated through various case laws, which makes it easier for the readers to perceive. The sequence and developments of the terrorism laws and their latest amendments are fully incorporated making this book a ready reference of the terrorism laws in India. Moreover, reading the author's professional experience as a Public Prosecutor in the NIA makes the read more absorbing.

The book extensively defines what constitute 'terrorism' in the light of Constitutional Court judgments and covers the provisions relating to bail which is of immense use to the Bar, Bench and the common man to understand the judicial approach to this law. The author reminds that denial of bail shall not be the single object of invoking this law. The law is to be invoked only with due regard to the facts, circumstances and evidence adduced in the case. The author also explains how the powers are misused by the police and quotes the Supreme Court cautioning the public prosecutors to rise to the occasion and discharge their responsibilities on behalf of the public and not on behalf of the police. This book is undoubtedly a go-to source for anyone who wishes to understand the issues surrounding the grey areas of the UAPA,1967.

The book contains a quick overview in the form of an Introduction for a great understanding of the subject along with the author's invaluable suggestions and concluding remarks for the proper implementation of the UAPA so as to protect the human rights of persons concerned. I personally feel that if those suggestions are properly studied and considered, the misuse of this stringent law can be curbed to a greater extend.

One of the most attractive elements I liked about this book is that each and every chapter starts with a quote from various authorities which is a capsule of what the author intends to explore upon. To quote one, Chapter VI of the UAPA (which has been amended by the 2019 amendment Act as I mentioned in the introductory part of this review) starts with the quote by Martin Luther King Jr. in a letter from the Birmingham Jail.1963, "…. never forget that everything Hitler did in Germany was legal." Here the law confers an unfettered power to the government to declare an individual as a terrorist and this draconian provision is very often misused nowadays to arrest and book students and journalists who dissent against the government.

The book critically examines the Unlawful Activities (Prevention) Act, 1967, the National Investigation Agency Act, 2008 and other laws on the subject through section-wise commentaries. The UAP Act is discussed flawlessly under seven Chapters along with a schedule. It starts with the Preamble and the Statement of Objects and Reasons. The author has discussed how a statute is to be interpreted and what happens when there are decisions of co-equal benches.

A commendable attempt has been made by the author to include all the Acts, Rules, International Conventions, Protocols, Orders and Reports relating to the terrorism laws through a ready-reckoning annexure. The book also refers to over 866 case laws which is immensely useful for a better understanding of how the provisions are applied by the higher courts.

The last portion of this book contains a valuable approach as "Law's Truth". The Law's truth carries the idea that the onus is to trace the truth from multiplex of facts that are mooted before the court. The High Court of Delhi in the case of Ved Parkash Kharbanda V. Vimal Bindal had explained this process and a pericope from that judgment is also given in this book by the author. It underlines the role of judiciary to find out the truth in every case as the guardian of our fundamental rights and reading this will establish a sense of confidence that is bestowed upon the judiciary by the citizens of India.

I'm sure this book being a high quality thoughtfully crafted work will be a great addition to the Indian Criminal Jurisprudence.

The Author is a practicing Lawyer of District & Sessions Court, Alappuzha